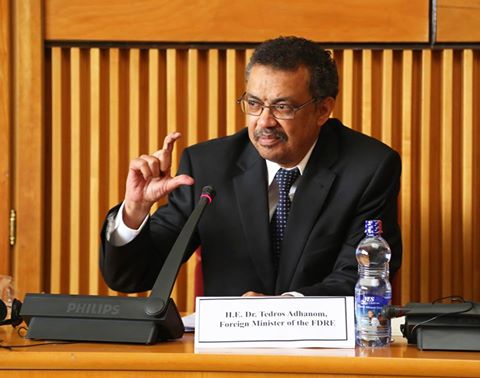 He said he hoped relations would be further strengthened as Ethiopia was the center of stability in the region as well as a growing economy. Mr. Drulak said Czech Republic saw Ethiopia as a priority country for development cooperation and would consider further enhancing cooperation. Ambassador Berhane Gebre-Christos expressed Ethiopia’s readiness to further upgrade the partnership between the two countries.

He suggested that in addition to established cooperation areas, the two countries should further enhance ties concerning peace and security since terrorism is a common threat. Ambassador Berhane praised Czech Republic’s cooperation with Ethiopia in such areas as textile production and technology transfer for brewing.

He briefed Mr. Drulak on civil society regulations, Ethiopia’s democratization efforts, and the progress of the upcoming election.

Photo: Dr. Tedros underlined that Africa is emancipating itself from the shackles of poverty and backwardness by adopting home grown solutions. Paris School of Interntional Affairs