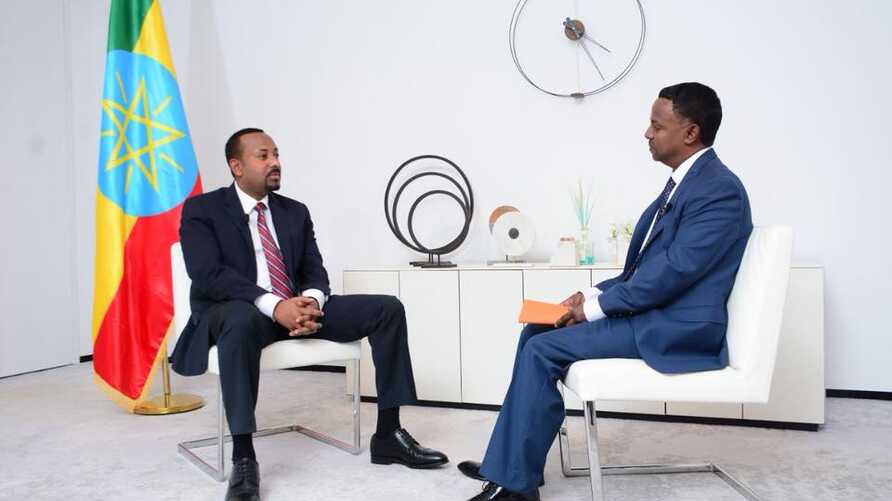 Nobel Peace Prize Winner Abiy: ‘All of My Intention and Action Is Aimed at Elevating Ethiopia’

By Salem Solomon, Ethiopian Prime Minister Abiy Ahmed he gave his first interview to a Western news organization (VOA) in late May, when he spoke to the Voice of America’s Horn of Africa service reporter Eskinder Firew, in Addis Ababa in Amharic. October, 11, 2019 in Addis Ababa, Ethiopia.

Editor’s note: Ethiopian Prime Minister Abiy Ahmed was named Friday as this year’s winner of the Nobel Peace Prize. In late May, he gave his first interview to a Western news organization when he spoke to the Voice of America’s Horn of Africa service reporter Eskinder Firew, in Addis Ababa, in Amharic. These highlights from their conversation have been edited for brevity and clarity.

For the past year, Prime Minister Abiy Ahmed has led Ethiopia through dramatic changes. Entrenched ethnic tensions and complex regional conflicts have posed ongoing challenges to the young leader’s reform agenda, but he remains resolute in his desire to make the most of his time in office. Abiy spoke to VOA’s Eskinder Firew about Ethiopia’s relationship with neighbor Eritrea, judicial reforms and the imprint he hopes to leave.

Eskinder Firew: On the occasion of your first anniversary as prime minister, you said, “I am only planning to elevate Ethiopia to high standards, awaken the public and lift up a country that is hanging its head. I don’t have any other ill intentions other than that.” What did you mean by that?

Abiy Ahmed: I don’t believe that it’s proper to stay in power for long periods of time. And as long as I have power, I believe that I should use that to change people’s lives. But within my efforts working to bring change, there may be errors — but all of my intention and action is aimed at elevating Ethiopia.

My agenda is not to use certain groups. To attack certain groups. Or to push specific groups or oppress people. What I am working on is work that elevates Ethiopians. That’s what I want, and that is what I do.

I can confidently say that I will not be involved in killing people or benefiting by illegal means by taking away from other people’s pockets as long as I am in a position of leadership.

EF: In your message to the government and people of Eritrea on the occasion of Eritrea’s Independence Day, you expressed Ethiopia’s readiness to remain committed to jointly addressing all outstanding issues the countries face. What are these “outstanding issues”?

There is a wide-ranging issue as it relates to South Sudan. We don’t think that Ethiopia alone can solve the problem, and the same when it comes to the problem between us and Eritrea.

And there are also problems between Eritrea and other countries, too. So this is a region that has a lot of problems. But additionally, this is also a region that wants to move in the direction of integration.

EF: The border closing between the two countries (Eritrea and Ethiopia) has continued until today. What is the situation currently?

AA: When the peace process started between the two sides, we saw the borders were widely opened on both sides. We can say that people were moving to and from — not like foreign countries, but movement similar to what happens within a country. There weren’t strict controls. And many people came from there to here, and from here to there. But that was not the only thing. Ethiopian opposition members who were based in Eritrea returned to Ethiopia, and Eritrean opposition members based in Ethiopia returned to Eritrea.

There needs to be a system where there is control and a custom-check system. And we need that capacity so that it would be possible to know what people are bringing in and out. There is a concern that if we leave the borders opened uncontrolled, that it would be difficult to prevent problems. We want to ensure that, if people are going from Ethiopia to Eritrea or from Eritrea to Ethiopia, it has to be for peace, development and tourism.

AA: Everyone should get equal treatment in the face of the law. It should never be used as a tool for revenge. When we respect the rule of law, it should be in accordance to that. So, when a government takes action, there are some who say that this decision was made by someone from my ethnic group or my community. But unless this thinking is gone or is depleted, it threatens the possibility of protecting the rule of law.

Within just this past year, there are so many people that could be jailed or face detention. Thousands are in prison charged with national security, corruption and displacement, etc. There is no need to put so many people in such a situation, because we want to reduce crime and not add prisoners.

But we still have people undergoing these legal processes through the federal and regional levels. But this is not because we are not taking action, it is because we are in the process of focusing on clamping down on crimes that are serious. On the other hand, if we don’t think that the law doesn’t apply to all equally, we can’t have a sustainable future.