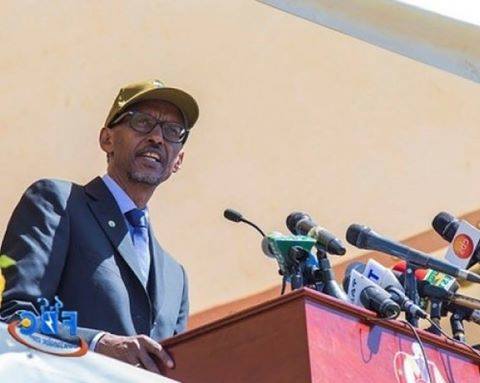 Addis Ababa (HAN) February 19, 2015 – Public Diplomacy and Regional political news. President Paul Kagame of Rwanda noted  that Ethiopia provided an exemplary model for Africa in employing African solutions for its own problems. Attending the celebrations of the 40th anniversary of the Tigray People’s Liberation Front in Mekelle, capital of Tigray Regional State.

President Kagame said that “Africa found one of its most important voices” through the Ethiopian struggle.

He added that Ethiopia had “maintained a principled commitment to self-reliance in all forms; economic, political and above all intellectual.”

The President reiterated that the spirit of Ethiopians against constant assault from outsiders testified to their resolve, saying that,

“nothing could break the Ethiopian spirit. You have not only prevailed, but continue to thrive.”

He said that the results of the struggle to overthrow the military dictatorship had paid off giving Ethiopia the ability to experience a stable and increasingly prosperous economy, an example for emulation among successful African nations.

President Kagame pointed out that through Ethiopia the world could now view Africa as a key player in global development.