Home Daily Security Briefing Ethiopia: President Hassan "Nation building is a model for Africa and for... 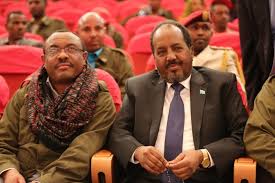 Addis Ababa (HAN) February 19, 2015 – Public Diplomacy and Regional political news. President Hassan Sheikh Mohamed of Somalia, held talks with Prime Minister Hailemariam during his visit to Mekelle to attend the celebrations of the 40th anniversary of the Tigray People’s Liberation Front. The two leaders exchanged views on the role of Ethiopia in AMISOM and discussed bilateral relations.

President Mohamud, speaking at the celebration noted that Ethiopia could be regarded as a role model for Africa in terms of its achievements in economic progress and democracy and in its success in achieving cohesion of the society, and its diverse nations, nationalities and peoples.

The President said this was “not only a great achievement for Ethiopia but for the continent as well.

”The President said Somalia was highly appreciative of Ethiopia’s continued support to Somalia to help it stand on its own feet again, and he noted that “the role of Ethiopia in its state and nation building is a model for Africa, particularly for Somalia.”

“with the continued support from Africans, IGAD and particularly Ethiopia, we want to make sure that we build a Somalia in peace within itself, in peace with its neighbors and with the rest of the world.”