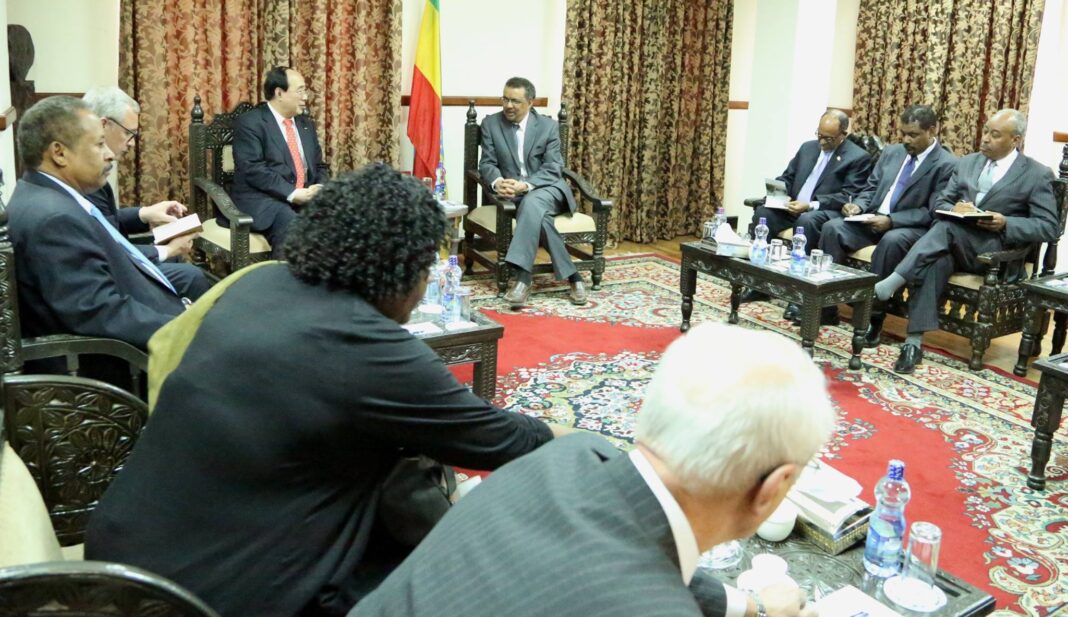 ADDIS ABABA (HAN) May 4,2015 Foreign Affairs News. Foreign Minister, Dr. Tedros Adhanom met with UN Under-Secretary-General for Economic and Social Affairs, Mr. Wu Hongbo at his offices today. The two side’s discussion focused on the progress of preparations for the upcoming the Third Finance for Development Conference which will be held from July 13-16, 2015.

Undersecretary Wu Hongbo hailed the progress achieved so far in the course of the preparation for the Conference. He said, despite the fact that Ethiopia was selected to host the conference in a matter of time not exceeding six months, preparations are on schedule and well underway to ensure the success of the conference. Undersecretary Wu Hongbo on the occasion briefed Dr. Tedros that the UN in conjunction with the Ethiopian Government is working to ensure participation of high level dignitaries and preparation of forging political consensus in preparing the outcome document is well underway.

He noted that the negotiation of the outcome document has seen progress in forging common grounds despite some differences. He however expressed his hopes that, as a member-driven process the negotiation will continue on remaining differences and member states will be able to come up with a final draft document based on the Doha and Montreal conferences, ahead of the Conference by compromising on their respective positions“. He also said that the Conference will debate on comprehensive and holistic framework on international finance and also come up some concrete deliverable. With regard to deliverables, he said, it is expected that co-facilitating and other countries would unveil initiatives during the Conference. This may include initiatives on sustainable development of agriculture and micro and small enterprises. The Conference will also dabble on issues related to industrialization and technology within the context of finance and development. Furthermore, the Conference will deliberate on commitments made on official Development Assistance by major donor countries.

It is also noted that the Conference will bring about all sorts of finance sources from public and private sectors and promote other innovative finance mechanisms Dr.Tedros Adhanom for his part noted that the fact that the Conference is going take place at the time the period set for the Millennium Development Goals comes to an end and the world is working to set the Sustainable Development Goals makes it important. He also noted that Ethiopia will work towards a full success of the Conference in the remaining two months in conjunction with the UN and other stakeholders. He said, Ethiopia will draw on its experience of hosting such big conferences as ICASA to make logistical arrangement meet the expectations of participants. In a press conference held after the meeting, Dr.Tedros noted that Ethiopia’s broad based and inclusive development, stability made our country best candidate to be the first African Country to host the conference. He said relevant government offices will strive to make accommodation, telecom, visa and other logistical matters as swift as possible. He further highlighted that Ethiopia will use the occasion to promote the rapid and inclusive development specially focusing on industrialization. The Conference is expected to be drawing 5000-6000 participants including several heads of states, finance ministers heads of WTO, IMF, The World Bank Group and other UN Agencies and private investors among others.