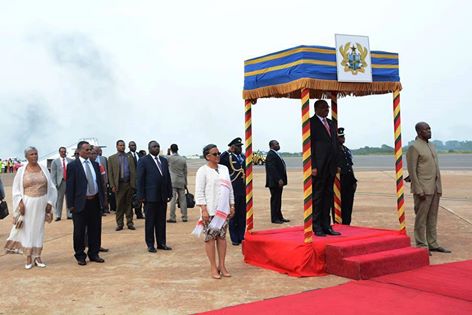 The President of the Republic of Ghana H.E. John Dramani Mahama hosted a state dinner in honor of H.E. Prime Minister Hailemariam Dessalegn and welcomed him to Ghana in the presence of the diplomatic Communities. Mr. Mahama appreciated Ethiopia’s sustained effort towards achieving the ideals of Pan-Africanism among others. Recognizing Ethiopia’s contribution in the fight against colonialism, its unbending determination towards the continental integration and its continued engagement in peace keeping around the world, the President reiterates his country’s support to Ethiopia’s bid to run for the UNSC Non Permanent Membership.

Prime Minister Hailemariam on his part hailed Ghana’s unmatched role in promoting a pan African agenda. The Premier also emphasized the excellent political relations the two countries have enjoyed ever since Ghana achieved its independence in 1957. The Premier also noted the limited economic ties between the two countries and underscored the need to strengthen and diversify the bilateral economic relations. He further expressed that in order to materialize the political gain achieved so far, the two countries should augment their efforts in the economic sphere “as not doing so imperils the political gains achieved so far”. During his stay the prime minister is expected to discuss on a wide range of issues with President Jhon Dramani Mahama. This is the second official visit by an Ethiopia leader after Emperor Haileselassie’s visit in December 1960.