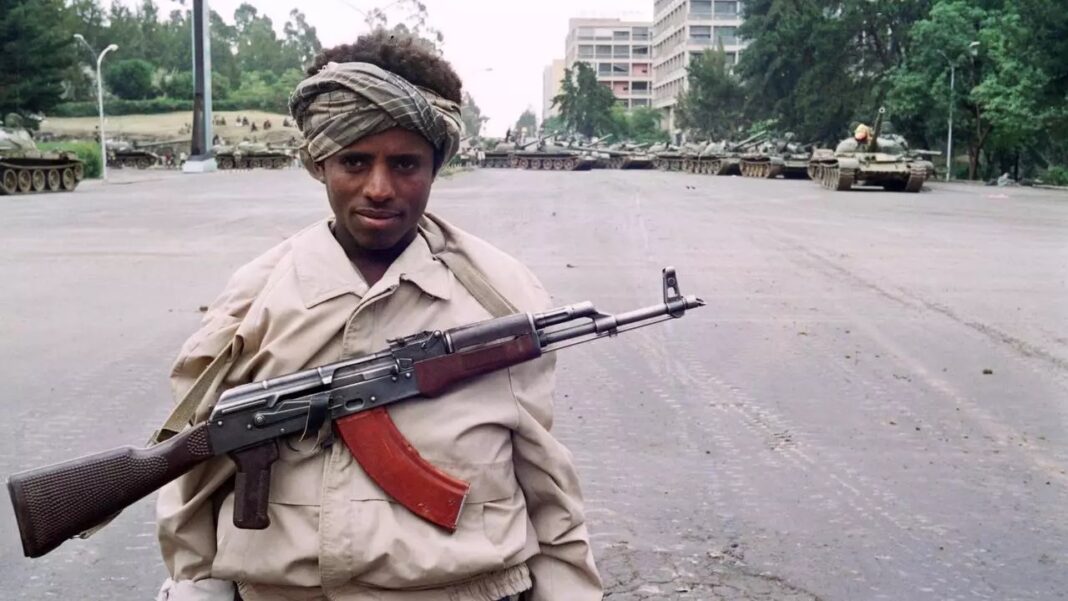 by Worku Aberra. Now that the military operation against the TPLF’s rebellion has successfully concluded, Ethiopia must embark on a democratic order free from the vestiges of the TPLF. The first order of business in creating the new Ethiopia is outlawing the TPLF as a terrorist organization. The government has the legal, moral, and political obligation to ban the TPLF for its terrorism, war crimes, crimes against humanity, and breach of the constitution.

The TPLF has engaged in terrorist activities in Ethiopia for more than 45 years. During its guerrilla years, it used terror to subdue its opponents, to extract food from the farmers, to fight the military government, and to eliminate internal dissent. In the 1980s the US State Department rightfully labelled it a terrorist organization. During its stay in power, it practiced terrorism selectively and broadly. The Prime Minister acknowledged in 2018 that the EPRDF government, a government dominated by the TPLF, was a terrorist state. He apologized to the Ethiopian people for the TPLF’s brutalities.

Caches of explosives, satellite cell phones, training manuals in Arabic, and audio instructional material, reportedly for undertaking international terrorism, have been discovered in one of the TPLF’s underground bunkers in Mai Kadra. Prime Minister Abiy Ahmed told parliament on November 30 that  from 2016 up to now, the TPLF has participated in all of the 113 conflicts that have taken place in Ethiopia, most of which were terrorist acts,  along with staging the unsuccessful rebellion against the government.

The TPLF has been militarily defeated, but it has vowed to continue its armed confrontation by resorting to terrorism. In the coming weeks and months, as the military relaxes its control over Tigray, the TPLF will most likely start targeting civilians, institutions, and infrastructure in Tigray and elsewhere in Ethiopia. An organization with such atrocious history of terrorism deserves to be outlawed.

The government may be concerned about the political ramifications of declaring the TPLF a terrorist organization. It may wish to protect the previous members of the TPLF who are still in the government or are now active in the Prosperity Party, some of whom are charged with leading the provisional government in Tigray, but such individuals should face the consequences of their actions.

The government may also be anxious about other previous or current government officials, at the regional or national level, who may have abated, facilitated, or committed terrorist acts. If such persons exist, they should face the court of law. Whatever political computations the government may be considering, it doesn’t excuse its reluctance to declare the TPLF a terrorist organization. Failing to do so is a serious dereliction of responsibility.

Declaring the TPLF a terrorist organization will weaken its standing with the international community, prevent it from using its looted financial assets stashed away in and outside Ethiopia, block it from legally participating in Ethiopia’s political affairs, and curb its support in Tigray and the rest of Ethiopia.

Before the war started, Mesfin Seyoum, one of the founders and current leaders of the TPLF, ascertained on November 1 that foreign governments would invade Ethiopia if Eritrea intervened in the impending armed conflict between the TPLF and the Ethiopian government, and that Ethiopia would become another Libya, Syria, or Yemen.  He guaranteed foreign intervention, but his certainty raises a few questions.

Why was he so sure about foreign intervention in Ethiopia? Did the TPLF agree to foreign intervention in a quid pro quo arrangement with a foreign government, possibly with the Egyptian government? We don’t know the answer for now. We may find out the truth in the future, but any political organization that has expressed its willingness to collaborate with a foreign invader engages in a treasonous act and must be proscribed.

The TPLF’s aborted revolt brought Ethiopia to the brink of a civil war. The TPLF tried to destroy the Ethiopian National Defense Forces (ENDF). Had its plan to annihilate the ENDF succeeded, it would have rendered Ethiopia vulnerable to foreign aggression. It also violated Ethiopia’s current constitution, a constitution written by the TPLF itself.

When the TPLF-dominated EPRDF government was in power, since it was impossible to oppose the regime peacefully, some political organizations, including the OLF, Ginbot 7, and The Ogaden People’s Liberation Front, were forced to resort to armed struggle to effect change, but the regime outlawed them because they advocated the use of violence to overthrow the government, in violation of the EPRDF’s constitution.

Article 9.3 of the constitution reads, “ It is prohibited to assume state power in any manner other than that provided under the Constitution”. Further, article 31 states, “ Organizations formed, in violation of appropriate laws, or to illegally subvert the constitutional order, or which promote such activities are prohibited”.

The objective of the TPLF’s failed rebellion was to replace the current government with a provisional government. In staging the rebellion, the TPLF violated the constitution and should therefore be prohibited from functioning as a political entity.  That is what its own law specifies.

All political systems, democratic or non-democratic, defend themselves against political groups that espouse violence to achieve their objectives: they outlaw such groups. Democracies respect freedom of expression and freedom of association, but reject violence as a means of obtaining political objectives. In Spain, the separatist Basque party Euskadi Ta Askatasuna (ETA) is banned. In Canada, the Front de libération du Québec (the FLQ) was outlawed.  Systemic survival requires systemic self-defense. Ethiopia’s nascent democracy should defend itself from a TPLF assault in the future, by banning the TPLF.

There is ample evidence that the TPLF has committed war crimes. Media reports indicate that the TPLF has forcefully recruited underage children and the elderly to fight in the armed conflict. Its youth wing massacred 600 civilians at Mai Kadra, according to the Ethiopian Human Rights Council. Survivors tell stories of how the TPLF executed the soldiers it “captured” during its assault at night on the bases of the Northern Command. Mass graves of TPLF victims have been discovered in Humera, Mai Kadra, and other places.  Forceful enlisting of child soldiers, massacres of civilians, execution of captured soldiers constitute war crimes. A political group that has committed war crimes must be outlawed.

In all of his political speeches, Meles Zenawi routinely condemned the Amharas as “chauvinists”. The EPRDF’s program identifies “chauvinism” as the enemy that must “be dealt with successfully” (see articles 1.5 and 4.8). The TPLF’s hateful propaganda against the Amharas for more than four decades has resulted in their mass killings.

The TPLF has also committed acts of genocide and crimes against humanity. There is evidence that the TPLF deceitfully sterilized Amhara women and underfunded development projects in the Amhara Killil (I will discuss the issues in a subsequent installment). It planned and executed the displacement of millions of Amharas, Gedeos, Oromos,  Somalis, and other Ethiopians. A political group that incites hatred against an ethnic group and has committed genocidal acts must be banned.

While the Ethiopian people are familiar with the TPLF’s atrocities, the international community is largely unaware of the TPLF’s crimes thanks to the propaganda work of its supporters in the western media, academia, and thinktanks; and the efforts of its lobbyists in influencing the attitude of NGOs, Western governments, and multilateral organizations in its favour.

Worku is a professor of economics at Dawson College, Montreal, Canada. He did his graduate studies in development economics at McGill University; currently he is doing research on child labour in Ethiopia.