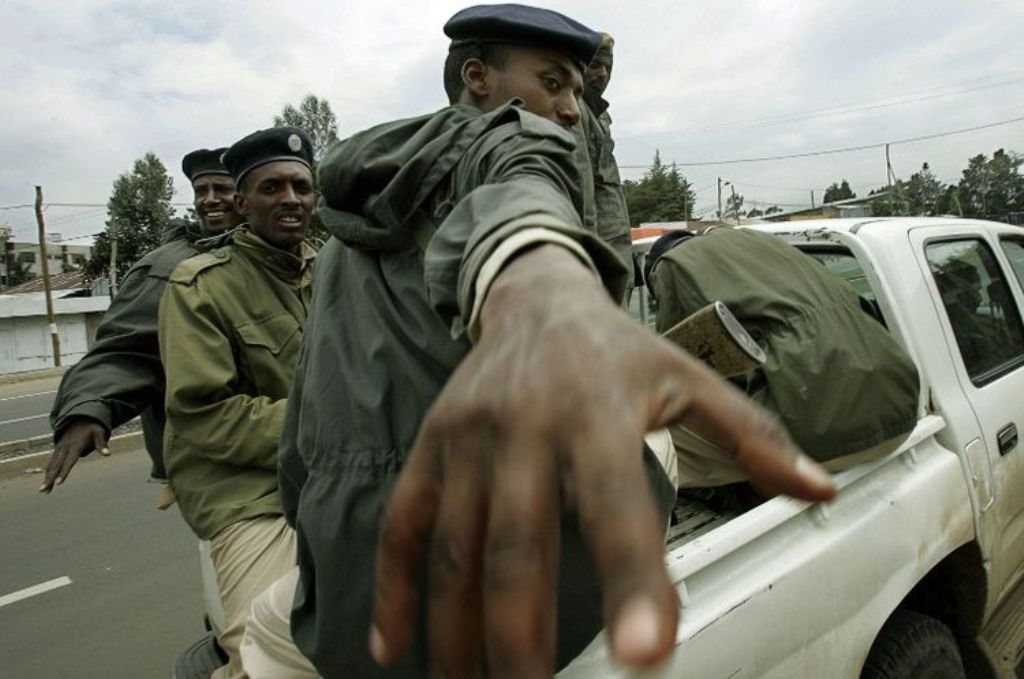 Rome (HAN) June 12, 2014 – Opinion By, Paul O’Keeffe is a Doctoral Fellow at Sapienza University of Rome.  Detention under spurious charges in Ethiopia is nothing new. With the second highest rate of imprisoned journalists in Africa and arbitrary detention for anyone who openly objects to the Ethiopian Peoples’ Revolutionary Democratic Front (EPRDF) regime’s despotic iron fist, the Western backed government in Addis Ababa is a dab hand at silencing its critics.

Eskinder Nega and Reeyot Alemu are just two of the country’s more famous examples of journalists thrown in prison for daring to call the EPRFD out on their reckless disregard for human rights. This April the regime made headlines again for jailing six[2] bloggers and three more journalists on trumped up charges of inciting violence through their journalistic work. Repeated calls for due legal process for the detainees from human rights organisations and politicians, such as John Kerry, have fallen on deaf ears as they languish in uncertainty awaiting trial. This zero-tolerance approach to questioning of government repression is central to the EPRDF’s attempts to control its national and international image and doesn’t show much signs of letting up.

Stepping up their counter-dissent efforts the regime just this week detained another journalist Elias Gebru – the editor-in-chief of the independent news magazine Enku. Gebru’s magazine is accused of inciting student protests[3] which rocked Oromia state at the end of April. The magazine published a column which discussed the building of a monument[4] outside Addis Ababa honouring the massacre of Oromos by Emperor Melinik in the 19th century. The regime has tried to tie the column with protests against its plans to bring parts of Oromia state under Addis Ababa’s jurisdiction. The protests, which kicked off at Ambo University and spread to other parts of the state, resulted in estimates[5] of up to 47 people being shot dead by security forces.

Ethiopia has a history of student protest movements setting the wheels of change in motion. From student opposition to imperialism in the 1960s and 1970s to the early politicisation of Meles Zenawi at the University Students’ Union of Addis Ababa.  The world over things begin to change when people stand up, say enough and mobilise. Ethiopia is no different. Similar to its treatment of journalists Ethiopia also has a history of jailing students and attempting to eradicate their voices. In light of such heavy handed approaches to dissent the recent protests which started at Ambo University are a telling sign of the level discontent felt by the Oromo – the country’s largest Ethnic group. Long oppressed by the Tigrayan dominated EPRDF, the Oromo people may have just started a movement which has potential ramifications for a government bent on maintaining its grip over the ethnically diverse country of 90 million plus people.

Students and universities are agents of change and the EPRDF regime knows this very well. The deadly backlash from government forces against the student protesters in Oromia in April resulted in dozens[6] of protesters reportedly being shot dead in the streets of Ambo and other towns in Oromia state. Since the protests began scores more have been arbitrarily detained or vanished without a trace from campuses and towns around the state. One student leader, Deratu Abdeta  (a student at Dire Dawa University) is currently unlawfully detained in the notorious Maekelawi prison for fear she may encourage other students to protest. She is a considered at high risk of being tortured.

In addition to Ms. Abdeta many other students are suspected of being unlawfully detained around the country. On May 27th 13 students were abducted from Haramaya University by the security forces. The fate of 12 of the students is unknown but one student, Alsan Hassan, has reportedly committed suicide by cutting his own throat all the way to the bones at the back of his neck after somehow managing to inflict bruises all over his body and gouging out his own eye. His tragic death became known when a local police officer called his family to identify the body and told them to pay 10,000 Birr ($500) to transport his body from Menelik hospital in Addis Ababa to Dire Dawa town in Oromo state.  Four of the other students have been named as Lencho Fita Hordofa, Ararsaa Lagasaa, Jaaraa Margaa, and Walabummaa Goshee.

Detaining journalists and students without fair judicial recourse may serve the EPRDF regime’s short term goal of eradicating its critics. However, the reprehensible silencing of opponents is one sure sign of a regime fearful of losing its vice-like grip. Ironically the government itself has its own roots in student led protests in the 1970s. No doubt it is well aware that universities pose one of the greatest threats to its determination to maintain power at all costs. Countless reports of spies monitoring student and teacher activities on campus, rigid curriculum control and micro-managing just who gets to study what are symptoms of this. The vociferous clamp-down on student protesters is another symptom and just the regime’s latest attempt to keep Ethiopia in a violent headlock. The regime would do well to remember that stress positions cause cramps and headlocks can be broken. It can try to suppress the truth but it can’t try forever.

Opinion Contributed By Paul O’Keeffe is a Doctoral Fellow at Sapienza University of Rome. His research focuses on Ethiopia’s developing higher education system.