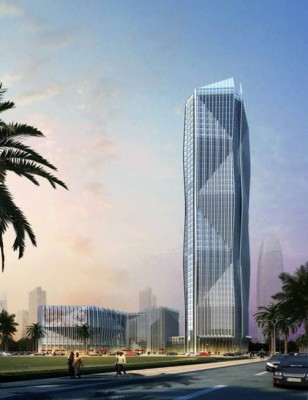 ADDIS ABABA (HAN) May 1, 2015 – Public Diplomacy and Regional Investment News. The largest commercial bank in Ethiopia, Commercial Bank of Ethiopia (CBE), has inked a deal with the China State Construction Engineering Corporation (CSCEC) to build its headquarters in Addis Ababa, Ethiopia’s capital city. The building is will become the tallest structure in East Africa once completed.

At the contract signing event on Tuesday, the general manager for CSCEC, Song Sudong said that this building “ will be a new window for your country, for your city, and also for East Africa.” The CBE president, Bekalu Zeleke, said at the same event held at the CBE’s head office in Addis Ababa that not only the height, but the overall quality of the building make it one of the best buildings in Africa.

While the new building has been lauded as a furtherance in infrastructure development in East Africa, it will also increase the very scarce number of skyscrapers in Africa, showing that Africa is ready now to develop its weak infrastructure and real estate sectors.

Furthermore, the proposed height of the structure (198 metres) is just 26 metres short of displacing the Carlton Centre as Africa’s tallest building. The Carlton Centre is 223 metres high. However, when compared to the tallest building in the world, Burj Khalifa, it is 632 metres shorter. This shows that despite the laudable strive Africa has displayed in reshaping its skylines, it still has a very long way to go. VA