DEGEHABUR (HAN) August 10, 2022. Public Diplomacy and Regional Stability Initiatives News. Monitoring Regional Issues. The opposition party, Oromo Liberation Front (OLF), has criticized the African Union’s (AU) characterization of the militarized conflict in Oromia regional state as “ethnic violence.” The OLF was referring to a recent “Brief Note” by the AU after its High Representative for the Horn of Africa, Olusegun Obasanjo briefed the AU Peace and Security Council (AU-PSC) on the peace talks in Ethiopia. The party said such characterization was based on “erroneous assumptions and factual fallacies that one does not expect from a continental organization… . A modest observer expects AU to base its conclusion on a non-partisan, solid, and comprehensive analysis of the drivers of the conflict and its actors.”

“Apart from the conflict in Tigray, western continued to be confronted by ethnic violence that is taking a heavy toll on inter-communal relations including in parts of Oromia and Benishangul Gumuz regions. These ethnic tensions have dates back to several decades but have seen a sharp increase over the past three years,” the AU’s brief note reads, triggering the backlash from the OLF.

AU’s characterization disregards the facts that “different groups of people who subsume varied identities have amicably lived with the Oromo people in Oromia in general and Western Oromia in particular. Hospitality, friendliness and protection of non-Oromo groups have been the hallmarks of the Oromo culture since immemorial. Members of the Amhara ethnic group have lived in the area mainly referred to by AU for the last 30 years and have never complained of misdeeds, as they have never had any problem,” the OLF said.

Armed confrontation has been raging by liberation forces since the 1980s, and there is no single report of an attack against civilians, including the Amhara, the party said, and accused the ruling Prosperity Party of trying to model the conflict as “ethnic” in order “to shun a political solution to the problem and deny the liberation fighters’ political demands.”

“It is sad to see the AU endorses this disingenuous stand of the Ethiopian ruling party. This raises serious doubt about the impartiality of the continental organization.”

Furthermore,the OLF said that it was “outrageous to see the AU claiming ‘more than 100 people, mostly from Amhara ethnic group were killed in Ethiopia’s Oromia region in the aftermath of Gambela attack” While the party said it condemns “any civilian killing and uphold the peaceful existence and rights of all civilians living in Oromia”. it also expects the AU to report about “hundreds of innocent Oromos killed in Oromia by armed government soldiers and cross border militias which human rights groups have continuously reported.”

The civilian killings in Gambella after the onslaught by the armed rebels on the government military camp “categorically targeted the Oromo residents in Gambella, accusing them of providing support for the rebels”, OLF said, “armed government troops went from door-to-door and attacked the Oromos, which graphic pieces of evidence have corroborated. It suffices to refer to the purposeful killing of a young Oromo, his hands tied on his back and repeatedly shot by Gambella Regional police members.”

The party insists that as its core value, it “always upholds a peaceful resolution of any conflict and political issues” and it supports the attempt being made by AU and other stakeholders to resolve conflict in the Horn, including those in Ethiopia. But “we are dismayed by AU’s biased ‘Briefing Notes’, which endorses state terrorism. We strongly demand the AU correct those facts and straighten its partiality; we expect at minimum from AU to refrain from complicating the already complex problem of this troubled empire,” the statement concluded. AS

Copyright © 2022 Addis Standard. All rights reserved. Distributed by Geeska Afrika ONLINE . To contact the copyright holder directly for corrections — or for permission to republish or make other authorized use of this material, Addis Standard 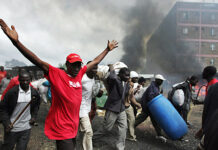