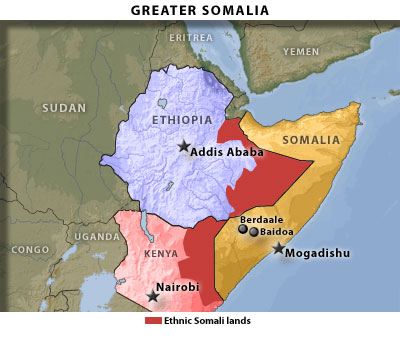 The party sees it as a sort of plot to destabilize the new Afar administration. It also linked it to “greater Somalia project” which has caused war between Ethiopia and Somalia in the 1970’s. “ARDUF strongly believes that the ongoing Afar and Issa-Somali conflict is deeply connected to the old dream of Greater Somalia ideology that caused regional wars between Ethiopian and Somalia and the liberation war waged by WSLF (western-Somali Liberation Front). Pics: Somalia After the Ethiopian Occupation: First Steps to End the Conflict and Combat Extremism

Read The text of the statement reads as follows (Click)

Afar Revolutionary Democratic Unity Front (ARDUF) or Afar UGUUGUMO has followed with alert and concern the turbulence and insecurity conditions created by Issa and Gurgura Liberation Front. One of the main goals of this terrorist Organization is to fight and kill innocent Afar civilians indiscriminately in order to occupy Afarland illegally.

ARDUF strongly condemns the indiscriminate and deliberate barbaric attacks on Afar civilians by the Somali Regional Special Forces and Issa terrorist armed groups that have killed dozens of Afar civilians, mostly children, women and the elderly people in their homes in the districts of Gawani, Qammih Baxa, and Galaqlu.

ARDUF expresses its sincere condolences and sympathies to the families and relatives of those who have died in defense of their land.

This ongoing fighting which is triggered by Issa terrorist Militia armed group by President Ismail Omar Guelleh’s Djibouti government has the following.

ARDUF strongly believes that the ongoing Afar and Issa-Somali conflict is deeply connected to the old dream of Greater Somalia ideology that caused wars between Ethiopian and Somalia in 1960-1964 border dispute and 1977-1978 Ogaden War.

Later Djibouti after its independence in 1977 adopted the same irredentist project of “Great Somalia agenda” under the Gouled & Guelleh Mamassan clan the Issa-Somali, by arming and supporting the Issa-Somali ethnic groups in Ethiopia against the Afar people to realize the old dream of Greater Somalia bordering the Awash River.

As a result, the Issa-Somali bandits’ expansionist took not only Afar areas but also vast parts from some districts of the Oromia Regional State, such as Ma’eso, Bordode, and Babile in the East and Borana and Guji in South of Oromia.

ARDUF has received information that the repressive regime of Djibouti and the Somali Regional State (western-Somalia) have sent their Special Military Commandos and Forces taking part in such conflict to kill the Afar civilians in their region criminally.

ARDUF (UGGUGUMO) investigating the involvement of TPLF in this War with Issa-Somali against Afar. If we found concrete information about TPLF’s involvement in this war, we will destroy all roads lead to Tigray Region and will cut off all connections with the Tigray Region. It is Tigray the best interest not to involve in this war against Afar. Otherwise, Tigray will have to pay a heavy price for their dirty policy. ARDUF will protect Afar civilians and defend Afarland by all means.

ARDUF calls on the Ethiopian people, the Ethiopian political parties, NGOs and the Diaspora should know this dangerous development that threatens the territorial integrity, sovereignty and political independence of Ethiopia. It is our collective responsibility and obligation to protect our Afarland by providing all possible means and support to ARDUF and the Afar people in their freedom-fighting and resistance against foreign occupation forces.

ARDUF urges the repressive regime of Ismail Omar Guelleh -Djibouti to immediately stop financing, arming and supporting the Issa and Gurgura Liberation Front-Terrorist Organization that waging war against the Afar civilians to occupy their land in Ethiopia illegally.

ARDUF calls upon the Ethiopian government to protect Afar civilians from foreign occupation forces which have illegally declared war on the Afar People to occupy their land by force. We urgently call on the Government of Ethiopia to demarcate the boundary between the Afar and the Somali Region upon the 1947 demarcation line based 160 kilometers from today’s border the Erer River and demands the federal government of Ethiopia to respect the geographical integrity, cultural and historical rights of the Afar region, by dismantling all illegally constructed settlements at Adaytu, Qunxa-Foqo and Gadamaytu by the Issa-Somali invaders with the help of TPLF regime immediately and to help the safe return of the Afar civilians who have fled the areas since the outbreak of hostilities under the oppressive rule of the TPLF.