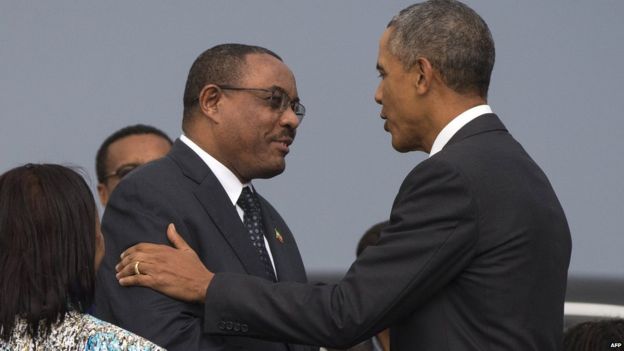 US President Barack Obama has praised Ethiopia’s role in hosting and supporting refugees as well as efforts to improve their condition.

Speaking at a panel organized on the sidelines of the 71st UN General Assembly in New York, President Obama said the role Ethiopia plays in sheltering refugees and helping them access to humanitarian assistance is exemplary to others.

Noting that Germany, Turkey, Pakistan, Canada and Sweden have also been playing important role, Obama urged other countries to share these practices so as to address challenges refugees have been facing.

At the panel Ethiopia, Canada, Germany, Jordan, Mexico and Sweden share their experiences in sheltering large number of refugees and activities to improve their conditions.

Prime Minister Hailemariam Dessalgen said that Ethiopia will continue to provide shelter to refugees and activities to improve their condition.

The government is providing the chance for refugees to get access to education and engage in income generating activities including agriculture, Hailemariam said.

The government is facilitating conditions to make refugees access to 30 per cent of job opportunities to be created in various industrial parks, as part of improving their condition, he added.

Ethiopia has been sheltering over 800,000 refugees.

World leaders are discussing ways of tackling the growing global migration crisis, the biggest migration crisis in which the number of displaced people surpassed those of World War II.