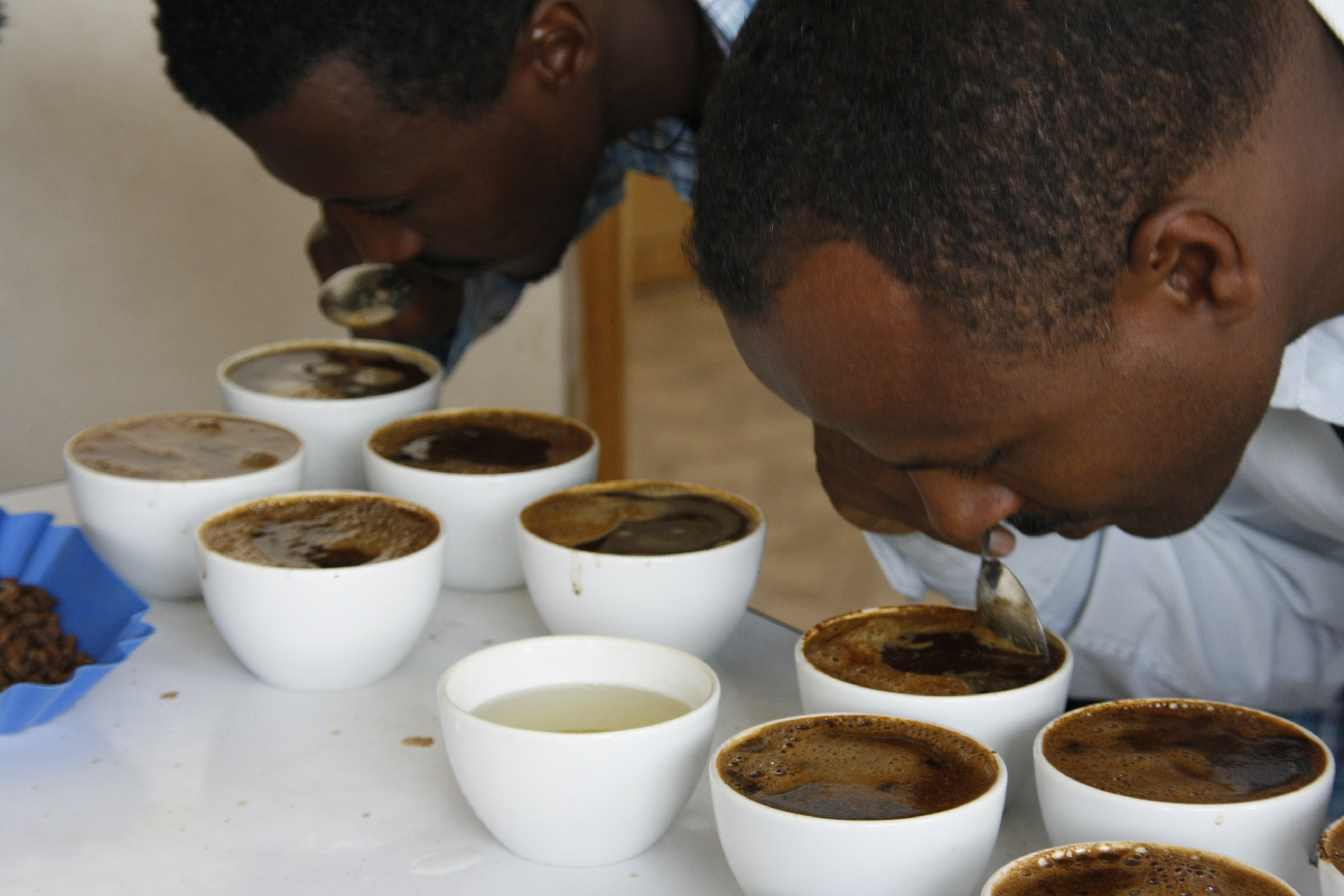 ADDIS ABABA (HAN) May 10.2016. Public Diplomacy & Regional Security News. In the birthplace of coffee, a conflict is brewing over who gets Ethiopia’s best beans.The government of this East African country wants dollars to build infrastructure, and so it has ambitious targets to increase coffee exports, capitalizing on world-wide demand for its high-end arabica beans.

“In most cases, the domestic price is higher than international prices,” said Fikru Amenu, an official at the Ethiopian Coffee and Tea Development and Marketing Authority, speaking at the World Coffee Conference in March. “We are just trying to convince [the traders] to export, because of the harder currency.”

The bean is believed to have originated in the Ethiopian region of Kaffa, discovered by a goat herder named Kaldi whose goats became energetic after eating the beans. Coffee plays a key role in cultural and social life: around half Ethiopia’s entire crop is consumed domestically, according to the U.S. Department of Agriculture.

But it is also an economic lifeline: Coffee is the country’s top export, and it raises up to a third of the country’s foreign exchange, the USDA says. Ethiopia is counting on beefed-up coffee exports to fund projects, including a light-rail system in the capital and a dam on the Nile river.

In the fiscal year ending this July, the government hopes to increase the foreign exchange raised from coffee exports to about $880 million, a jump of nearly 13 percent from last year, Mr. Amenu said.

To do that, he said, traders would need to export at least 206,000 tons of beans, up 12 percent from the previous year, and shift some to higher-price specialty grades. World prices for beans have fallen more than 10 percent over the past year.

The efforts have partly paid off for the government. The USDA forecasts exports this season could rise to record levels, while the impact of local restrictions could push consumption down slightly this year.

But Ethiopia has struggled to increase the overall harvest. Farmers are mostly small holders using basic agricultural methods. This season, the crop is expected to be nearly stagnant at 390,500 metric tons, according to the USDA forecast, though a drought due to El Niño could push production down. To truly increase export volumes, Ethiopians would have to drink substantially less coffee. It is a target many say is nearly impossible.

“If you tell an Ethiopian not to drink coffee, no one will listen to you,” said Wondwossen Meshesha, the 28-year-old operations manager at Tomoca Coffee, a family-owned roasting business and cafe chain famous for its macchiatos and fresh-roasted beans.

Five years ago, the 63-year-old company had just one cafe, a narrow shop in the central piazza in Addis Ababa, Ethiopia’s capital. The business was roasting about a ton of coffee a day, said Wondwossen.

Now, Tomoca has six cafes dotted around Addis and roasts 10 times as much as it used to, he said.

“We needed to wait a long time for [Ethiopians] to develop their own purchase power,” said Wondwossen.

Over the last decade, Ethiopia has become one of Africa’s fastest-growing economies, averaging more than 10 percent growth a year, according to the World Bank.

The economic growth has fueled a proliferation of coffee shops in Addis Ababa and roadside coffee stalls outside the capital.

Demand for the beans is so strong that Ethiopians would drink all their own coffee if they could, said James Kanagwa, the Ethiopia country representative for Pan-African lender Ecobank.

“It isn’t in the interests of the government to encourage domestic consumption,” said Kanagwa, sitting in his office overlooking several bustling construction sites. “Where will the foreign currency come from if they have nothing to export?”

While demand for specialty coffee is creating a market for Ethiopian beans, the push to export also comes as coffee countries face steep competition. Currency devaluations in the world’s largest arabica producers have pushed farmers to export beans.

A sign outside Tomoca, an Ethiopian cafe chain and roastery, in Addis Ababa’s central piazza. The 63-year-old company is well known in Ethiopia for its Italian-style coffee, made with Ethiopian arabica beans.

Ethiopia is also competing against other African producers like Kenya and Tanzania to export premium beans. But people in those countries drink tea and reserve their coffee for exports.

Without gains in production and with steady competition at home, Ethiopia’s answer may not be in exporting more coffee but simply charging more.

Some premium beans, sourced directly from farmers, can command three times the New York market price. Those prices come with a set of standards not all farmers can meet and a workload not all can afford, said Takele Mammo, general manager of the Yirgacheffe Coffee Farmers Cooperative Union.

Takele said the union tries to focus on exports. But even he said it is hard to suppress Ethiopian demand for the country’s best-tasting beans.

“If there was a chance of consuming coffee, the right coffee, Ethiopians would go for that,” said Takele. “If you tell my Mum not to drink coffee, [she will] choose not to eat.”