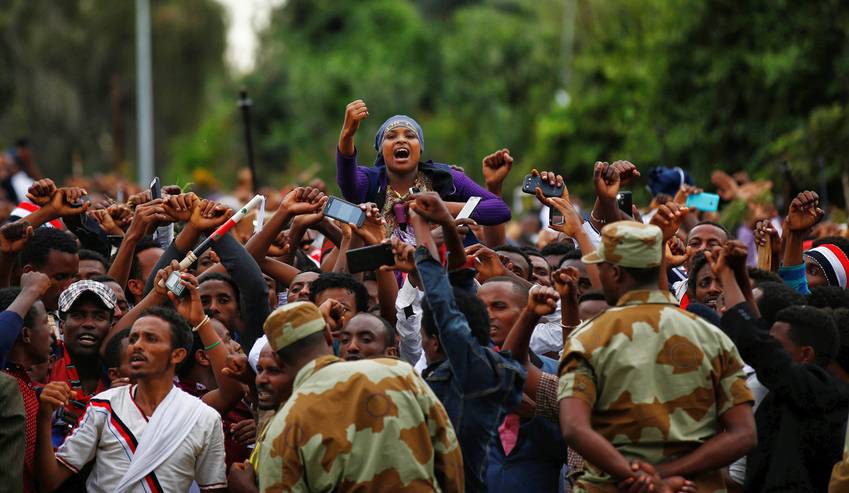 On Monday, Ethiopia declared three days of national mourning. But as debate rages about what exactly happened in Bishoftu, and who was responsible, it’s far from clear that everyone is mourning the same thing. By SIMON ALLISON.

The official death toll from the Bishoftu disaster stands at 52. This is an extraordinary number. Even taken at face value, this makes the deadly stampede one of modern Ethiopia’s bloodiest episodes. But we can’t take anything at face value. This is a country where information is tightly controlled, and where casualty counts are routinely underplayed by government spin doctors.

Other reports, from rights groups, suggest we should take that official death toll and double it. Still others, from activist organisations, say we should multiply it by 10. Whatever the truth – and we may never have an exact reckoning – far too many people died in Bishoftu on Sunday when an ordinary religious festival turned into a bloodbath.

Again, the accounts of what happened are contested. The government’s version is that violent protesters causing “pre-planned mayhem” – the Prime Minister’s words – forced worshippers to flee the scene; the fleeing turned into a stampede, with people crushed to death or falling to their deaths when they were forced over the edge of a deep ditch.

Eyewitnesses and opposition spokespeople describe a very different incident. In their version, peaceful protests at the festival were met by a violent police response, with tear gas and live ammunition being used against unarmed civilians. This sparked the stampede.

On Monday, the government declared three days of national mourning to commemorate those who lost their lives in the disaster. Flags will fly at half-mast all over the country, and in its diplomatic missions abroad. This was a necessary response to the loss of life, but raises an important question: exactly what is Ethiopia mourning?

This is the official version, according to a statement released by the Government Communication Affairs Office: “The country declares the mourning following the death of people who lost their lives because of the violence instigated by anti-peace elements”.

One suspects, however, that the fate of the dead protesters is not the Ethiopian government’s primary source of grief. The lives of perceived political opponents are cheap, after all: the death toll from this latest round of political unrest, which began in November 2015, has so far claimed at least 500 lives, and this is a conservative estimate.

Instead, the government is mourning something altogether more precious to it: the precipitous erosion of its authority, which grows more fragile with every new round of demonstrations. Just last year, it was unthinkable that hundreds of Ethiopians could gather in defiance of the Ethiopian People’s Revolutionary Democratic Front’s one-party rule, shouting anti-government slogans and crossing their arms above their heads in a gesture of defiance (the same gesture made in front of the world’s television cameras by Feyisa Lilesa as he crossed the finish line at the Rio Olympics). Now, such protests are commonplace. For the first time in a decade, Ethiopia’s opposition movements are emboldened, and seemingly undeterred by the government’s repressive tactics.

These protests, too, are a form of mourning. For the Oromo activists who have spearheaded them, their grief is rooted in the present and historic marginalisation of their people, both politically and economically. Amhara activists, who have joined in with anti-government protests of their own, express similar sentiments: that Ethiopia’s Tigray-dominated political elite are sucking up all the fruits of Ethiopia’s much-lauded economic growth, and refusing to share with anyone else. It’s not as simple as that, of course – Hailemariam Desalegn, the Prime Minister, is from a small southern ethnic group – but there is enough truth in these charges to make them effective rallying cries. And the reality of Ethiopia’s high economic inequality speaks for itself.

Whatever the truth of what happened in Bishoftu, the tragedy will only make these rallying cries even more potent, fuelling further demonstrations and rebellions in the Oromia region and beyond – and precipitating further government crackdowns.

Earlier this year Daily Maverick argued that Ethiopia’s rulers faced a stark choice: to acknowledge and address the real grievances of their opponents, or to turbocharge its repressive streak. By now, it is obvious that it has chosen the latter option. And as long as it continues to respond with brute force and bullets, there will be plenty more mourning to come. DM