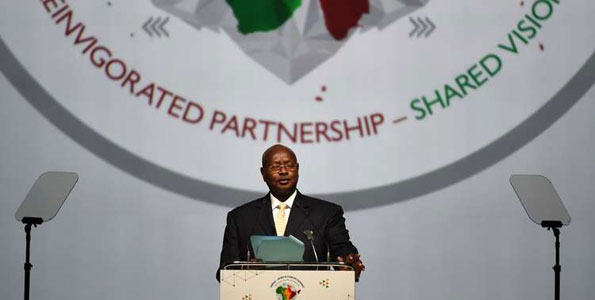 Nairobi (HAN) October 29, 2015 – Public Diplomacy and Regional food Security Initiatives News. Indian Prime Minister Narendra Modi will spell out his vision for the future of his country’s economic relations with Africa on Thursday, as he addresses the major India-Africa Forum Summit in New Delhi.

The premier will speak to delegates, including heads of state or officials, from all 54 African Union nations, with announcements aimed at jump-starting bilateral trade and burnishing Indian investment in the continent.

Despite more than doubling since 2007 to $72 billion in fiscal 2014-15, India’s two-way trade with Africa is still comparatively small.

“This (summit) I think is going to take relations between India and Africa to new heights,” Modi told a group of African journalists at the weekend, adding he foresaw “a major jump” in trade following the event.

“We are going to have very important decisions which will give both India and Africa a new sense of self confidence, our relations are going to become closer and deeper,” he said.

Postponed since December over the Ebola crisis, the approximately 1,000-delegate summit represents the highest number of foreign dignitaries to descend on India since 1983 and is thought to be the biggest ever overseas gathering of African leaders.

As well as delivering two speeches, Modi will host bilateral meetings Thursday with leaders of countries including Angola, Ethiopia and Egypt.

On Wednesday he held a record 19 meetings with leaders including Zimbabwe’s Robert Mugabe and Muhammadu Buhari of Nigeria, the oil-rich nation key to India’s energy interests on the continent.

New Delhi has worked hard to showcase its commitment to Africa’s economic rise and historic friendship with African nations — with some thinly veiled jabs at China — as it vies for a greater share of the continent’s natural resources.

“No matter at which point of history you may like to refer to, the inescapable fact is that business and related economic activity is a major driver of India’s close and friendly ties with Africa,” Indian Foreign Minister Sushma Swaraj said Wednesday.

India’s economic presence in Africa is dwarfed by China, whose bilateral trade with the continent topped $200 billion last year — more than the GDP of the 30 smallest African economies combined.

But it is gaining ground, dominated by the energy sector and led by private entrepreneurs.

Africa primarily exports raw materials to India, including precious metals, gemstones and oil, which are then processed into goods such as cut diamonds or refined petroleum products.

The first India-Africa summit was just seven years ago — long after China, the European Union and Japan held similar meetings.