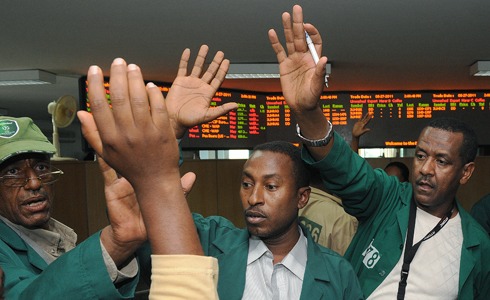 Addis Ababa (HAN) May 18,2015 Public Diplomacy Regional Investment and Market News. By Brook Abdu. The Ethiopian Commodity Exchange (ECX) transferred the 17th membership seat for 1.6 million Br on an auction held on May 7, 2015.

The bid that was held in the presence of the bidders and legal representatives in the premises of the ECX was concluded with Abayneh Zerfu, an individual bidder, making winning offer.

When a member plans to sell his or her seats at the ECX, the Exchange takes the mandate of holding the bid and floating tenders. Then competitive bidders will officially buy documents and make offers for the seat.

The offer for the current seat was five times the original price of the seat which was 301,000 Br, according to Yohannes Hamereselassie, member development specialist at the ECX.

A member is required to fulfill a number of requirements in order to be eligible for the selling of a seat according to ECX rules.

A trading member and an intermediary member are entitled to transfer a membership seat to a person approved by the Exchange as a member. A transferring body must also be trading in the ECX for three consecutive years and must pay all the money owed. He also must not be suspended from the ECX as article 4.8.1.3 of the ECX Rule states.

After fulfilling these requirements, a member who transfers the seat notifies the ECX in a written letter of intentions to transfer his seat. Then the ECX checks the eligibility of the member and receives a starting price of the sale and the bid bond amount which it then announces on advertising outlets with all the costs covered by the transferring body.

After this process, the ECX accepts the winner for the acquiring of the seat and trade in its floors.

For the current bid, four persons had shown an interest, buying the bid document among which only two offered. The other offer for the seat was 1.27 million Br.

The money that is gained through the transfer is wholly given to the previous owner.

ECX had sold seats for 50,000 Br initially and the price had increased over time. Previously a member’s seat was sold for the same price as the recent one which Orchid Business Group, owned by Akiko Seyoum, offered.

ECX has 65 warehouses that have a capacity of accommodating 300,000tn with the major trading items at the Exchange being cash crops such as coffee and sesame, as well as other produce including maize, wheat, pea beans and mung beans.

Having been established in 2007, ECX commenced its trading operations in 2008. AddisFortune.