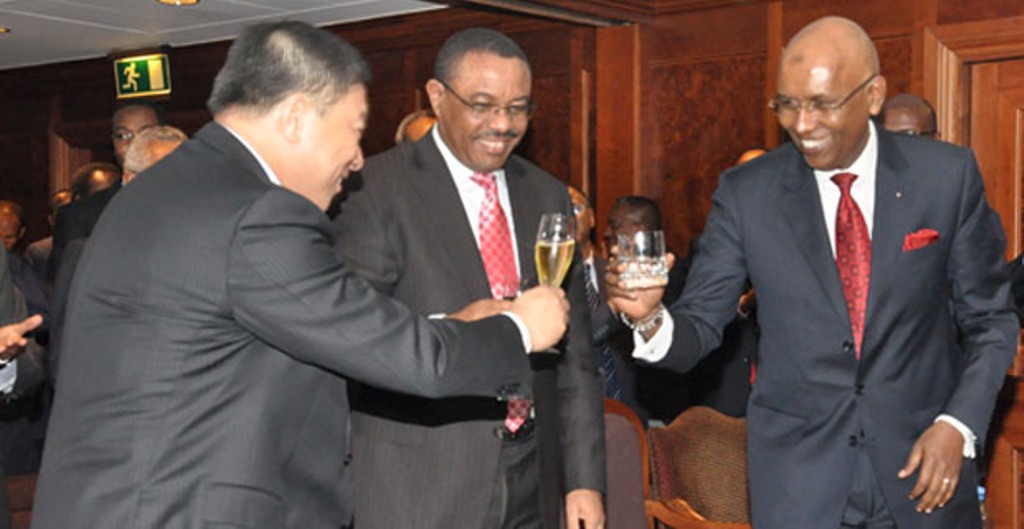 The Chinese Export & Import Bank provided a 2.3 billion dollars loan for the construction of the Ethiopia and Djibouti electrified railway project, in an agreement signed on May 22, 2013, at the Sheraton Hotel in Addis Ababa.

The Chinese Export & Import  rail project is expected to improve the relationship between the neighboring countries of Djibouti, Eritrea, Somalia and Ethiopia

In 2011, Ethiopia signed an agreement with a Chinese state-run firm to build the final section of a railway line that will link its capital Addis Ababa to the tiny Red Sea state of Djibouti,

“This agreement is a contract to construct between Mieso, which is half way from Addis Ababa, to the Djibouti border,” Getachew Betru, general manager of the Ethiopian Railways Corporation,

The deal signed late on Friday with the China Civil Engineering Construction Corporation (CCECC) covers a 339-kilometre line that will join another project to connect the capital with Djibouti.
According to AARON MAASHO, of Reuters, Ethiopia expects to open a new railway line linking the capital Addis Ababa with the Red Sea state of Djibouti in early 2016, a project at the centre of plans to create new manufacturing industries, the head of the state railways said.

“It is a game-changer for us,” said Getachew. “It will be one of the most vibrant economic corridors in the world.”

The 700km line is being built at a cost of US$4 billion (RM14.47 billion) by China Railway Engineering Corporation (CREC) and China Civil Engineering Construction (CCECC).
Ethiopia is seeking to have 5,000km of new lines working across the country by 2020.

“By October 2015, a considerable portion of the Addis Ababa-Djibouti project will be finished,” said Getachew Betru, chief executive of the Ethiopian Railways Corporation, adding that trains would run soon after. “We will start early 2016.”

In addition to the Djibouti line, two others are being built across the country which are among a range of big infrastructure investments that also include new roads and dams to produce hydro-electric power.

In a bid to keep the economy expanding at the 8% or more it is already achieving, the nation of 96 million people wants to become an African manufacturing hub, offering investors efficient transport, plentiful labour and cheap power.

In the capital, a new US$475 million light railway system will be tested in the next few weeks before scheduled services start. It will be the first city metro to operate in Sub-Saharan Africa.

Among the new national railway lines, one will connect the region of Afar, where Ethiopia is encouraging the mining of potash for fertiliser, to Djibouti, the main export point for land-locked Ethiopia. Canada’s Allana Potash Corp is among the firms developing mines in Afar.

Most Ethiopians still depend on subsistence agriculture, but the country is building a textile and garment industry, produces shoes, assembles cars and trucks and other products. It is drawing some investors from China and India, where wages are rising.

For now, logistical difficulties such as poor roads and an old fleet of trucks mean transporting goods from the capital to Djibouti can take days. The new railway line will cut the journey time to about eight hours.