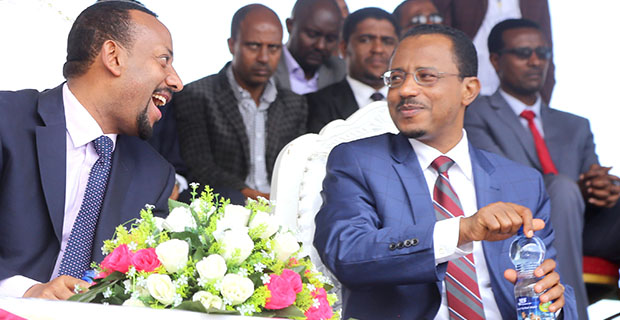 Addis Ababa (HAN) December 2, 2019. Regional Security Opinion By. Wedibizet. Ethiopia (abyssinia) is ancient country but its political process and the mind set of the current Ethiopian politicians is mind boggling. A Federal defense minister who has been nominated by a prime minister and appointed by a parliament goes against a prime minister before resigning from his post. Lemma’s action is bizarre, since He wants to keep his post but wants to work against his boss, the Ethiopian Prime minister. I don’t have any problem Lemma having a different opinion about Ethiopian Politics but he should have been resigned before criticizing his immediate boss.

Here are very important scenarios for Mr. Lemma in Ethiopian politics:
1.Lemma should have come to the media before all the agar parties voted to join the party and Abiy started to create the structure. One possibility is Abiy may have started nominating people in the Oromia region for the party position and Lemma was ticked of by that action. This is highly like because Lemma did not oppose the merger of the party in the official executive committee vote. In fact, if I am right, he voted for it.
2.Lemma my have seen the balance of power in the Oromia region is favoring the jowar and OLF factions and the new party’s success during the coming elections might be doubtful. Accordingly, Lemma might be adjusting his position and may join the jawar and OLFaction.
3.Finally, this could be a set up. The fact that the balance of power in the Oromia region is tilting towards the OLF and Jawar faction Abiey and Lemma may have concocted a strategy to create a new party under lemma that will divide the vote in Oromia and finally they will establish a unity government. This strategy may include EZEMA.
4.What ever the case is Lemma will not stay in the Prosperity Party. I am afraid that as a Politian he may have lost his political capital. Although his intentions were good his stay in the process and reversing his position is not a good timing.
5.Overall, as time goes by his influence will wind down and he will find himself in the mercy of OPDO. His coming out as opposing group is not good to the federalists. It is a wrong timing.

Mr. Lemma Megersa is an Ethiopian politician currently serves as the Minister of Defense of Ethiopia, and was the President of the Oromia regional state of Ethiopia and Deputy Chairman of the ruling party in the region, Oromo Democratic Party. He was appointed as minister on 18 April 2019

Meanwhile: Mr. Lemma Megersa who is supposedly to be a key ally of Abiy Ahmed and the current Ethiopian Defense Minister and the vice chairman of ODP totally rejected the newly established Prosperity Party and Abiy Ahmed’s philosophy of “Medemer”. In an interview with the Voice of America Afaan Oromo service on November 29, 2019 Lemma Megersa said he opposes the merger of the EPRDF parties especially the rush way it is conducted without due process and adequate discussion within the EPRDF. In addition Mr. Lemma said he doesn’t believe in the philosophy of “Medemer” which Abiy Ahmed is pushing in Ethiopia since he grabbed power through a soft coup with the help of foreign powers in Ethiopia.

Defense Minister Lemma is quoted as saying the following, “I have had a different perspective from the beginning of the talks about the merger of EPRDF,” said Lemma, adding that “even if that is to happen it shouldn’t be done in a hurried way.”Mr. Lemma Megersa was wildly popular in Oromia state before Abiy Ahmed was appointed as temporary Prime Minister of Ethiopia. The so called team “change” was named after Lemma Megersa and it is still known as (team Lemma), but this was a calculated deception to manipulate the people of Oromia especially the youth. The biggest threat to the mercenary man in Menlik Palace was Lemma Megersa because his popularity in Oromia was going through the roof and he was becoming quite known and respected politician in Ethiopia. Shortly after Abiy Ahmed came to power he removed Lemma Megersa from the public eye by appointing him a ceremonial position of Defense Minister while the real power was held by the Military Chief of Staff. For all practical purposes Lemma Megersa was hidden out of the Ethiopian people’s eye instead Abiy Ahmed was on national television on a daily bases. After Lemma was effectively removed, Chief of Staff of the Ethiopian Defense Force, General Seare Mekonnen was killed and replaced by a trusted comrade of Abiy Ahmed.

Why did Lemma Megersa decided to sharply oppose his onetime comrade in arms and his current boss Abiy Ahmed? Since he was one of the most trusted insiders of the Team Lemma, Lemma Megeresa knows most of the secrets and the plans of Abiy Ahmed and his masters. Lemma might have been trying to work from within and change team’s direction, but he was not successful and he decided to go public. The other possible reason why he rejected Abiy Ahmed’s brand new PP party is, Lemma is a genuine Oromo nationalist and he doesn’t want the fake prime minster destroy the achievements of the Oromo people.

As all Ethiopians are aware Abiy’s brand new Prosperity Party is a completely different animal than EPRDF. PP has absolutely nothing in common with EPRDF in fact PP is opposite of EPRDF in all the main principles of a party. PP’s policy regarding Languages, Ethnics, Nations and Nationalities, regional state, federal system and other key national issues is unitary which would erase all that was realized by the Ethiopian people in the past 50 years of struggle.

We don’t need to spend any time or energy why Lemma said he does not believe in “Medemer” because almost every Ethiopian knows it is a fake and fancy word created to confuse uneducated Ethiopians.

The bottom line is team Lemma is without Lemma and most conscious and patriotic Ethiopians are abandoning the bloody mercenary Abiy Ahmed’s boat and Defense Minster Lemma Megersa is not going to be the last big wig that jumps ship. Ethiopians around the world are praising Abo Lemma Megersa for finally coming to his senses and exposing the small man destroying Ethiopia. Hopefully Ethiopia can be saved from the looming Abiy Ahmed made disaster.