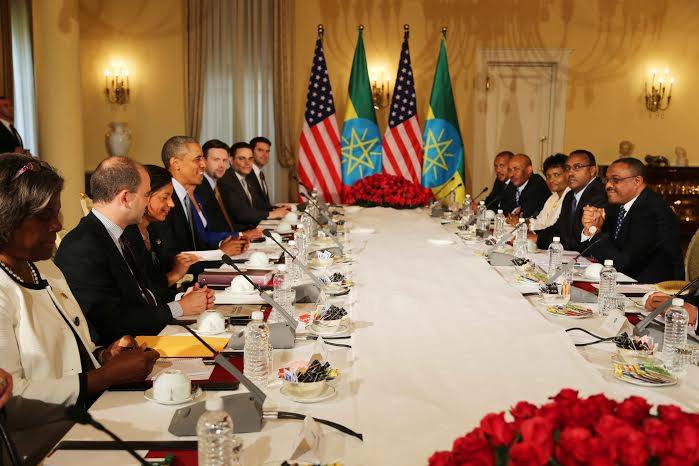 President Obama visit focus on security threats coming from Somalia, without the presence of Somalia President, Hassan Sheikh Mohamoud, either in Nairobi or Addis Ababa, according to IGAD Diplomat.

The African Union Mission in Somalia, or AMISOM, said “Operation Jubba Corridor” was launched on Friday in the Bay and Gedo regions south of the capital Mogadishu along with Somali government troops. Officials and witnesses confirmed heavy fighting was raging near the Al-Shabaab strongholds of Dinsor and Bardhere, and said the militants hit back with a suicide car bomb attack against a convoy of Ethiopian troops, who are leading the offensive. “The operation will ensure that all the remaining areas in Somalia will be liberated and peace restored,” AMISOM said in a statement.

A Somali military official in the region, Mohamed Osman, confirmed heavy fighting between AMISOM and Somali troops on one side and the Al-Shabaab on the other.

“There are heavy clashes going on between our forces and Al-Shabaab militia along the road that leads to Dinsor. The militants ambushed a military convoy,”

he said. Witnesses who live close to the battleground said a suicide attacker struck the convoy with a car bomb loaded with explosives. There were no immediate reports on casualties.

The offensive was launched days after Kenyan government reports that a US drone strike in the region killed at least 30 Al-Shabaab rebels, among them several commanders. It also comes several weeks after last month’s Al-Shabaab assault on a AMISOM base which left dozens of Burundian soldiers dead in one of the single deadliest incidents since AMISOM soldiers arrived in Somalia eight years ago.

Background: The Al-Shabaab, meaning “youth” in Arabic, emerged out of a bitter insurgency against Ethiopia, whose troops entered Somalia in a 2006 US-backed invasion to topple the Islamic Courts Union that was then controlling the capital Mogadishu. Al-Shabaab rebels continue to stage frequent attacks, seeking to counter claims that they are close to defeat after losing territory in the face of repeated African Union and Somali government offensives, regular US drone strikes against their leaders and defections.