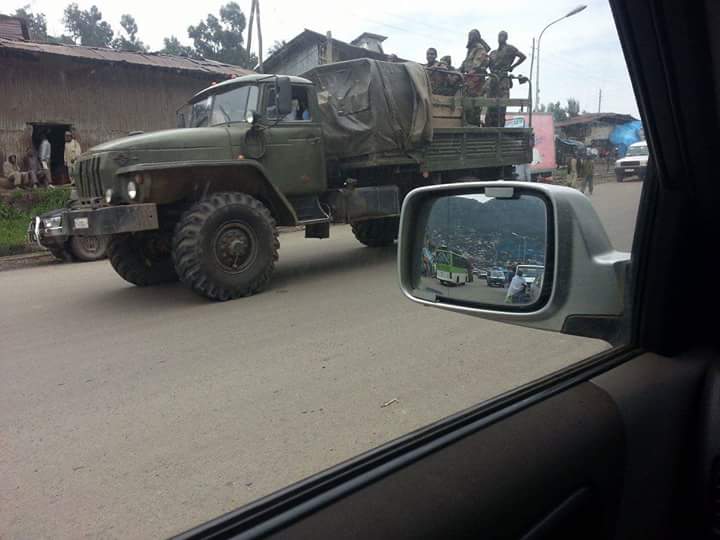 ADDIS ABABA  (HAN) September 7.2016. Public Diplomacy & Regional Security News. By Zeray Hailemariam. Ethiopia is facing unlawful demonstrations. The resulting unrests are causing property damage and claiming innocent lives in Oromia and some parts of Amhara States. Particularly, the continuous unrest in Oromia, which was ignited by ‘Integrated Addis Ababa Master Plan’, has unnecessarily claimed human lives. Though, the execution of the master plan was obstructed by the Oromia State administration, the unrest continues — a manifestation the fact that the root cause was not the master plan. In fact, it is a prolonged good governance problem which angered the people and pushed them to demonstrate, demanding justice prevail quickly.

For some, it might appear that the unrest is ignited by few remnants of OLF [Oromo Liberation Front] or the camp led by Jawhar Mahamed. Yet, what the people are demanding is for quick measures to be taken to correct the bad governance as well as unfair and unjust practices prevailed in the state administration. The few narrow nationalists might have taken the situation to their advantage by painting a fake color to the constitutional demands of the people. The Jawhar Mahamed led camps amazingly lost no time to hijack the people’s questions of justice. Sadly, the federal and state governments were too late to tell the truth and this has added fuel to the crisis.

What is interesting is the fact that the people of Oromia demanded full implementation of the federal system and democratic principles; fair and equitable distribution of the economic development gains; termination of farmers displacement from their lands in the name of investment and other development endeavors. Their questions were crystal clear and it is inline with the constitutional order. They did not ask for anything that is against the constitutional order. However, during the demonstrations, some opportunists have been repeatedly seen trying to hijack these legitimate demands of the people for the sake of their narrow agendas. Rational people would not doubt for a second that what the farmers are demanding and what the elites are propagating are completely different phenomenon. To be precise, the bad governance and unjust practices in that state ignited the people to demonstrate.

To be honest, state officials attempted to take serious measures against officials who created the gap between the people and the ruling party, OPDO (Oromo Peoples Democratic Organization). However, it was a temporary solution which would not resolve the problem from its root. As a result, the instability has continued and expanded to other zones. State and federal government officials should involve in the case candidly to resolve the issue and make the people confident on the EPRDF led government.

The people of Oromia had confidence on EPRDF and in its democratic way of handling such problems. However, thanks to the rent seekers who have been sucking the blood of the people, the confidence is quickly lost. The rent seekers provoked the people to demonstrate so that the crimes they committed remain hidden. And their plans succeeded at least for the time being — they diverted the attention of the state and federal governments to concentrate on the demonstrations.

Therefore, rent seekers must be exposed first; questions of the people must be democratically addressed soon before it is too late. Otherwise, the narrow nationalists will take the gap between the government and the people as advantage and will continue to instigate huge unrest. Again, the rent seekers could find places to hide.

To be precise, first, the government must be committed as before to get rid of rent seekers who are angering the people. Second, those who robbed the people in day time must be brought to the court of law. Third, the government should seat and discuss matters with the people in detail and must take quick measures to solve their agonies. These are the only ways to sustain peace, order, democracy, economic development and hence the good relations between the people and EPRDF. Generally, the questions being raised in the Oromia regional state are legitimate. The only thing we need is to eliminate rent seekers and solve the people’s problems. This would help to single out and isolate the various narrow nationalists hiding in these areas. The prevalence of good governance results in a favorable relationship between the government and the people. Hence, no hiding places for rent seekers and narrow nationalists would be found. The discussion with the people should be also focus on exposing the nature and agenda of rent seekers and narrow nationalists.

On the other hand, the recently erupted unrest in Gonder, Bahir Dar and other towns in the Amhara state are something that should be treated differently. Again, the people of Amhara and chauvinists must be seen separately. Remnants of the Derg and the feudal regimes are coming out to instigate racial conflict using the issue of the Wolkait Zone of the Tigray state as cover. They are massively bombarding the people and the youth with a completely false information and propaganda even to the extent of advocating the killing of EPRDF supporters. If the Wolkait people have a question of identity, the case should have been raised in Wolkait not in Gonder. However, the issue of Wolkait is simply applied by the chauvinists to create racial conflicts among the two brotherly people of Amhara and Tigrai. Since the chauvinists have not any useful agenda to convince the people, they are coming up now with hateful propaganda, racial tactics and absolutely baseless narratives.

The fundamental aim of the chauvinists is to instigate serious bloodshed between the peoples of Tigrai and Amhara. They make everything clear that they do not accept the language based federalism arrangement, the constitutional order ratified by people, the [national and state] flags endorsed by the consent of the people etc. They repeatedly proclaimed openly their aim to topple the elected government by any means possible, illegally or legally. This is in sharp contrast with constitutional principles that the Nations, Nationalities and peoples of Ethiopia should never allow it to happen. Disparately, there are now waging and firing their last bullet with the aim to disintegrating the country. Their way is like the proverbial saying: ‘A donkey once said let no grass grow after I die’. They prefer Ethiopia to disintegrate if they do not manage to rule it in their own projection. They want to restore the thinking of the past regimes. Their dream is to witness a country with one language, culture, and nation, denying the existence of diversified cultures, languages, nations and nationalities.

All in all, Ethiopia is currently facing three fundamental problems: chauvinism, narrow nationalism and rent seekers within the circle of EPRDF. These are the key enemies of the people and threats to the survival of the country.

We should not tolerate the chauvinists who are totally against the constitutional order and federal arrangement. The government has to fight them by any means possible to maintain the constitutional order. The public relation of the party and government need to join hands to convince the people the fact that chauvinism pose an obstacle to our country. The people need to be aware of their hidden agenda. If serious and responsible measures are taken, it is fair to be sure that the remnants of Derg and feudal regimes would be contained and isolated. The bottom line is however to listen to and address the various demands of the people which the two camps are using as cover to promote their agendas.

Then again, the rent seekers inside EPRDF and the government, who are being used by the chauvinists and narrow nationalists must be identified and expelled. Such concerted efforts would help the party to remain as strong as and as beloved as before.

Ultimately, EPRDF should understand that it is leading a country with federal system based on diversity. What is lacking in Ethiopia is good governance. It must be realized quickly. I personally would like to see EPRDF taking honest and responsible measures against rent seekers who are creating dissension among the people as well as against chauvinists and narrow nationalists who are endangering our coexistence in the next two years.