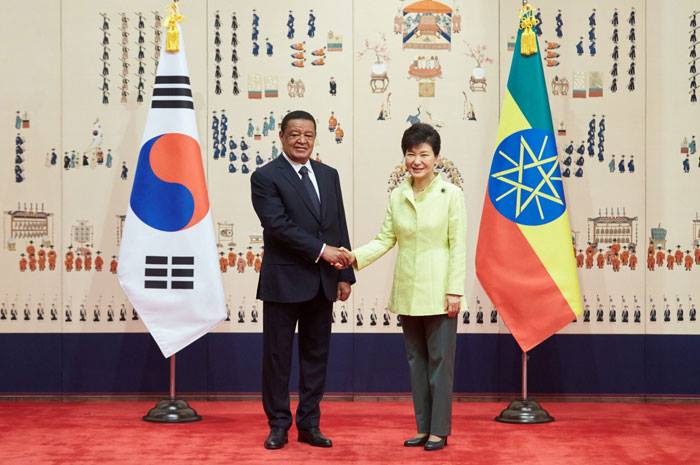 “Korea is a true ‘blood brother’ of Ethiopia.”

The President, who highlighted that Ethiopia was following the development path of Korea to bring about a real economic transformation, added that the two countries could bolster their bilateral cooperation in the future. President Park who also referred to Ethiopia as the only “blood brother” of Korea in Africa, as it sent troops to aid South Korea during the Korean War (1950-1953), appreciated the continued growth of bilateral ties between the two countries.

President Park recalled the completion of the construction of the Memorial Hall for Ethiopian Veterans in the Korean War and described the hall as a symbol of “the will of the Korean people, who will never forget the sacred sacrifices made by the Ethiopian soldiers who fought in the war.”

President Mulatu said that capitalizing on economic cooperation coupled with expanding investment and exchange ties would turn the bilateral relationship into a closer, mutually beneficial, partnership. President Park responded that “If we combine the resources of Ethiopia with Korea’s development experience and knowhow, it will greatly contribute to win-win cooperation for both countries.” President Mulatu, visiting a memorial for the New Community Movement, Saemaeul Undong, in Gumi, Gyeongsangbuk-do in North Gyeongsang Province, promised that he would be an agent for the promotion of the rural development campaign.

The President also expressed his hope that the Korean Government would continue to provide support for the ongoing rural development pilot projects. President Park pledged Korea would back Ethiopia to ensure the success of the pilot programs and also said Korea’s Knowledge Sharing Program (KSP) would contribute to economic development.

President Park said Ethiopia had high potential to become a global base for textile production, as the country had rich raw cotton resources and was strongly competitive in terms of price. She expressed her hope that the potential Korea-Ethiopia “fiber-clothing technology park,” currently under negotiation, would proceed successfully after feasibility studies were completed. President Mulatu who gave a briefing on Ethiopia’s Growth and Transformation Plan II, which will start next year, said the plan would include large-scale development projects, including railways, power plants, heavy industries and facilities to process fertilizer.

The President urged the Korean government to provide support for these projects so Korean companies could participate and private sector investment be encouraged. President Park urged President Mulatu to provide detailed information about the investment market potential in Ethiopia. She underlined the importance of sharing information and providing government support for private sector investor.