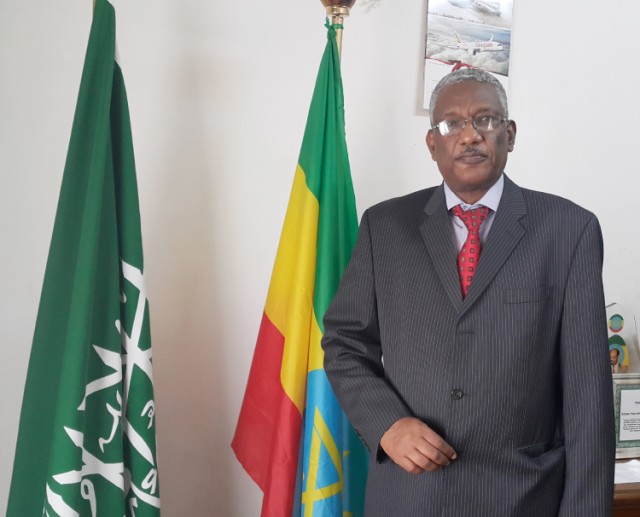 ADDIS ABABA (HAN) February 1, 2016 – Public Diplomacy and Regional Stability Initiatives News. Relations between Saudi Arabia and Ethiopia have grown noticeably in recent years due to efforts on both sides to reinforce deep-rooted and historic ties between the two nations, according to the country’s Consul General to the Kingdom, Wubishet Demise.

In an exclusive interview with the Saudi Gazette, Demise said the Ethiopian Embassy in Riyadh and the Consulate General in Jeddah are working hard to improve not only the diplomatic relations, but also commercial contacts, tourism and also possible cooperation in other fields.

The ambassador said the long history of relations between the two countries was based on mutual respect, non-interference in internal affairs and joint efforts to promote common interests and push them to new horizons in the interest of their peoples.

“We are very encouraged by the current status with Saudi Arabia and we give so much for that relationship based on mutual interest but we still need more efforts to bring it to a satisfactory level,” Demise said.

In 2015, there were various official visits between the two countries, including the visit to the Kingdom in October by Ethiopian Prime Minister Hailemariam Desalegn, who met with Custodian of the Two Holy Mosques King Salman and other top officials to discuss bilateral relations, regional issues, human trafficking, trade and other important matters of mutual concern.

“Moreover, last September joint meetings were held in Riyadh to review all aspects of relationship such as education, labor, trafficking and other issues,” Demise said.

On the topic of labor, Demise said: “The two governments are working together on a labor exchange agreement. We submitted a memorandum of understanding to the Saudi government. We hope they will immediately sign this, so that there will be a mechanism, an agreement, that Ethiopian labor can come and work in Saudi Arabia.”

To maximize the benefits of labor export to the Kingdom, Demise said “our role is to make our people to be aware of the Saudi rules and regulations and we also educate them of such information to make their lives better here in Saudi Arabia”.

Demise said he foresaw potential collaboration between companies from both countries, as there are ample business opportunities in the wake of large government spending on various mega industrial projects.

“The Ethiopian government has developed comprehensive economic development plans that have contributed to the country’s substantial growth in agriculture, industry and services. So, we work closely with the Saudis to implement activities that promote increased trade between the two countries,” Demise said.

Saudi Arabia is the fifth largest exporter to Ethiopia, behind China, Germany, Somalia and Switzerland.

“We import around 40 percent of our needs from Saudi Arabia,” Demise said.
Regarding tourism, the ambassador emphasized that Ethiopia has rich tourism assets, including cultural, historical and archaeological attractions.
“We are a peaceful and stable country. Plus, we have the right policies and strategies” to attract tourists, he said.