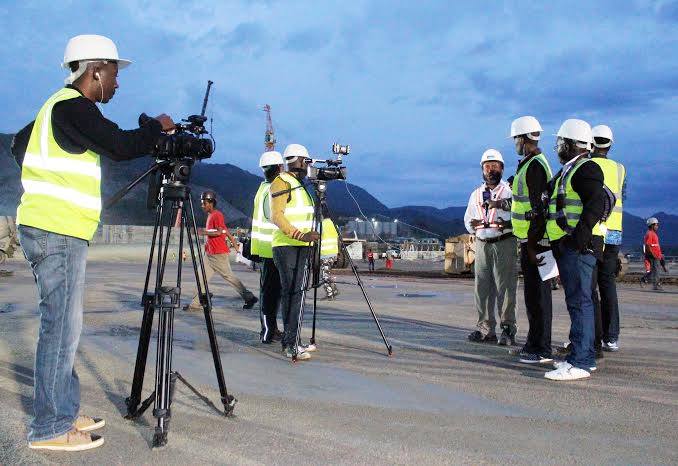 ADDIS ABABA (HAN) October 31, 2015 – Public Diplomacy and Regional food Security Initiatives News. Seven journalists who have been visiting Ethiopia for the past ten days paid a visit to Grand Ethiopian Renascence Dam Project (GERDP) on October 29/2015. GERD is the largest hydroelectric power project in Africa and one of the top ten in the world.

On their arrival the team was accorded a warm welcome by Engineer Simegnew Bekele, the Project Manager of the GERDP and other employees of the project, and was briefed on the general undertakings and status of the project. The project manager pointed out that the GERDP is a monument of the Ethiopian people and a symbol of cooperation between the Nile Basin states. He also noted that, up on completion, the project will be utilized not only for the production of hydroelectric power but also tourism and research center.


Engineer Simegnew explained to the journalists that the construction of the dam will not significantly affect other basin countries .Instead; he explained the Dam will maintain a regulated flow of water throughout the year and as a result, it avoids flood risks in downstream countries. It also increased energy production of existing power in downstream countries, reduces evaporation and transmission losses and by doing so, it benefits the entire‪ ‎Nile Basin states.

The GERD is a practical way of win-win development undertaking, Simegnew noted. It heralds new era of cooperative regional development, improves water management and increases the collective resilience of Nile Basin nations to climate change impact that threatens the Nile basin and the region in general. Visiting the project, the journalists expressed their admiration to the people and government of Ethiopia’s resolve and tenacity in launching such a huge project that benefits the region. MFA