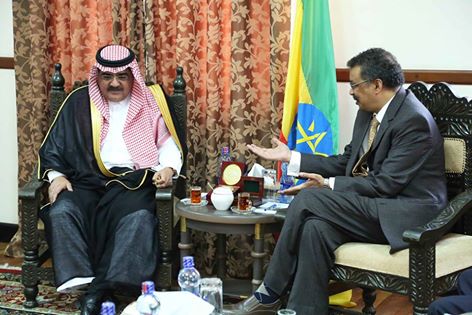 Prince Fahad on the occasion noted Recon International Africa and its partner Tasyapai’s interest to invest in Ethiopia in infrastructure development particularly in rail way, airports and road construction. In addition, the two partnering companies are interested in hydroelectric power generation, hospitality sectors. Dr. Tedros in his remark noted the historical and unique relations between Ethiopia and Saudi Arabia and emphasized the need to further strengthen it through trade and investment. Dr. Tedros said

“despite an increase in Saudi investment it is not as one would expect it to be given the historic bilateral relation and geographical proximity between the two countries.”

The Ethiopian Foreign minister added that Ethiopia’s fast growing economy and its  around 90 million population combined with countries of the region provides huge market opportunity for investments in Ethiopia. He said Ethiopia is making huge investment in railway; road and power generation because of its firm belief that developed infrastructure would make the economy more competitive.

The Ethiopian Foreign minister underlined that the sectors chosen by the two companies are key areas of development stressing that the Ministry of Foreign Affairs and other relevant offices would avail support to bring the projects to a successful end.Recon International Africa is currently making huge investment in Djibouti, South Sudan, Somalia, Kenya and Uganda in construction of roads and building of houses. The delegation is undertaking discussion with Ministry of Transport on ways to engage in the construction of the new airport in Mojo, Oromia Regional State.