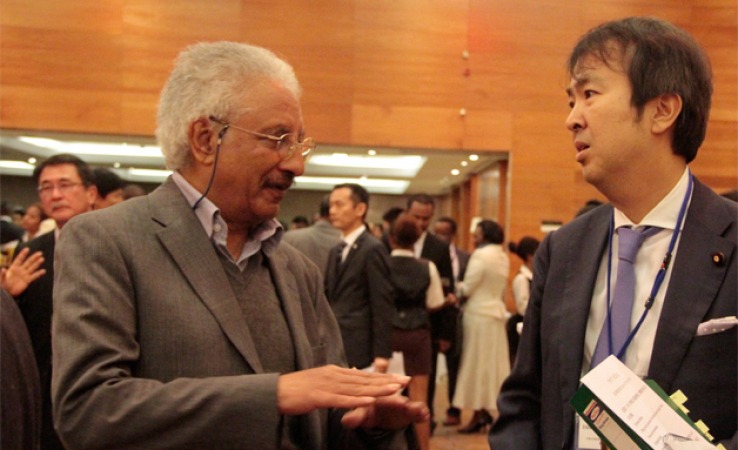 ADDIS ABABA (HAN) November 8, 2015. Public Diplomacy & regional Security. The Government of Japan has decided to award the “Order of the Rising Sun, Gold and Silver Star” to the long-serving Economic Advisor to the Prime Minister, Newaye Gebreab.

In a statement the Japanese Embassy issued here today, the award is being given to Newaye for his contribution to further strengthening economic relations between Japan and Ethiopia. Newaye has a deep knowledge and understanding of Japanese Industrial Policy, obtained through his chairmanship of the Japan-Ethiopia Industrial Policy Dialogue, which he has chaired since 2009, the statement said.

The embassy added that he has also been instrumental in successfully introducing the Kaizen philosophy into Ethiopia, which has been expanding into different sectors and significantly improving the management of many firms. Newaye has been an Economic advisor since 1996 and the Chairman of the National Bank of Ethiopia since 2000. In addition to that he is the Executive Director of the Ethiopian Development Research Institute (EDRI) is a semi-autonomous research think-tank engaged in Economic research and policy analysis(ENA).

About eight industrial parks being built in main regional towns will go operational this Ethiopian fiscal year, according to the Ministry of Industry (MoI). The industrial parks are expected to increase the competitiveness of local and foreign investors, Taddesse Haile, Industry State Minister, said. An industrial park built at Bole Lemi area in Addis Ababa has already started operation, while the Hawassa industrial park will go functional within the coming three and four months, he stated.

The industrial parks are central to Ethiopia’s plan to build an industrial base and effectively exploit the African Growth and Opportunity Act (AGOA) opportunity, the State Minister said. In the second Growth and Transformation Plan (GTPII) period, due attention will be paid to effectively use AGOA, a nonreciprocal trade preference program that provides duty-free treatment to US imports of certain products from eligible sub-Saharan African. World Bank Group President, Jim Yong Kim (PhD), has recently praised Ethiopia’s endeavor in building environmentally friendly industrial parks. (FBC) The Ministry of Animal and Fish Resource Development (MoAFRD) has disclosed its intention to develop fish farms at household level.

Minister of the Ministry, Sileshi Getahun, told WIC that Ethiopia has huge untapped potential for fish development like its animal resource. Ethiopia’s fish development potential is comparable to that of the animal resource development, the minister noted. He also said that though we need to conduct a study if we have to get actual data on Ethiopia’s animal wealth at present, it has been told time and again that its animal wealth ranks tenth in the world and first in Africa. According to the minister, fish has both the potential to increase food nutrient content and ensure food security at household level. Experience of different countries engaged in aqua agriculture shows that they have managed to ensure their food security through development of their fish resource.

There are more than 180 fish varieties in the world while Ethiopia is home to more than 30 of them. (WIC) Condominium houses being built in various parts of Addis Ababa will get power from solar energy as of this Ethiopian budget year. Instead of the national grid, the condos will only use the power they obtain from solar panels to be installed at their roofs for electricity production.

“Solar energy is the preferred solution to address the power shortage in condominium houses,” Debretsion Gebremichael (PhD), Deputy Prime Minister for Finance and Economic Cluster and Minister of Communication and Information Technology, said. CEO of Ethiopian Electric Service, Gosaye Mengiste, said works are nearing completion to implement a pilot program this Ethiopian budget year on the condominium houses under construction in the city.