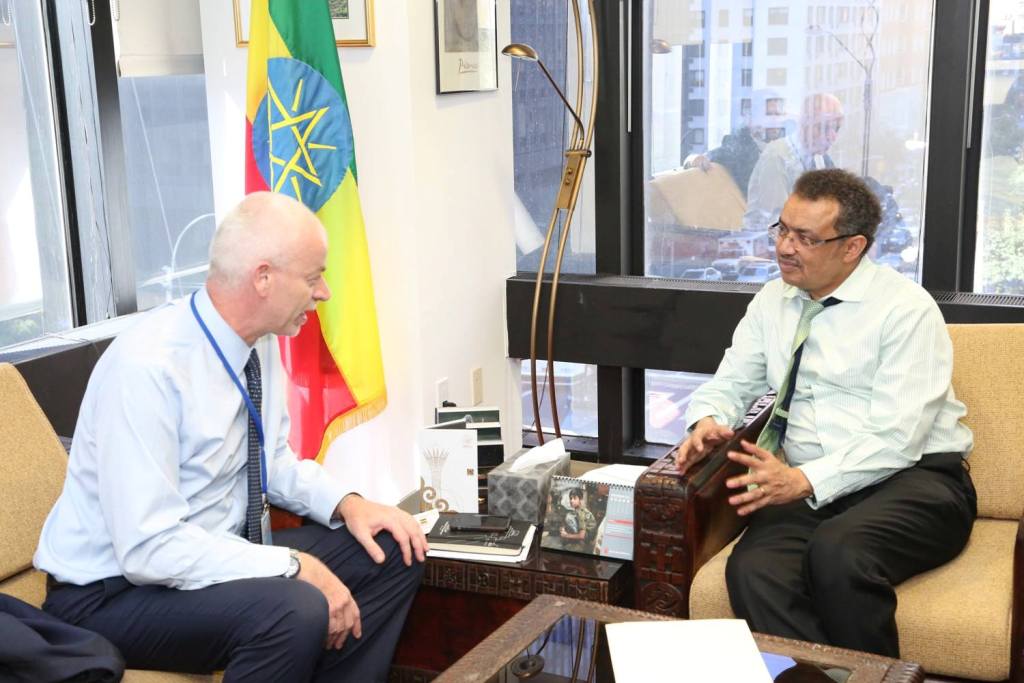 Addis Ababa (HAN) September 30, 2014 – Investment and National security news. The Ethiopian Foriegn minister  Tedros met with Mr. Pestilli, Vice Minister of Foreign Affairs and International Cooperation of the Republic of Italy, on Friday  in New York, on the margins of the 69th UN General Assembly. Mr. Pestilli said that Italy was keen to work with Ethiopia to address the problem of immigration and its root causes. The problem which has become a major concern for Italy is said to top Italy’s priority.

The vice Minister said Italy is keen to work with Ethiopia on the issue . A conference on migration for the East Africa region is scheduled to take place next month in Addis Ababa under the auspices of the EU and Italy. Mr. Pestilli said he discussed the need for a holistic approach to deal with the problem of immigration when he had talked to State Minister Ambassador Berhane Gebre-Christos during his visit to Ethiopia in July. They had agreed that the key to address the problem of immigration at its root was creating job opportunities for African youth.

For Somalia and Eritrea Issues: The stabilisation of Somalia is a commitment that Italy “has undertaken to support and that was one even when they weren’t getting so much attention”, underscored Minister for Foreign Affairs Emma Bonino as she spoke in London with journalists in May 2013, the margins of the international conference on the future of that Horn of Africa.  Italy’s involvement has also been aimed at “convincing others in Europe to follow suit”, she added, stressing that Italy considers the Somali government a “partner” who is “assuming its responsibilities” in the process under way.

This could be done by exploiting the comparative advantages of Africa through increased FDI flow in addition to addressing the problems of human rights abuse in countries like Eritrea, where so many youngsters saw migration as the only way out to escape the hopeless situation at home. Bilateral development cooperation and trade relations should also take this into consideration. Dr. Tedros thanked the Government of Italy for its attention to the need to address the problem of immigration and its consequent encouragement for more Italian companies to invest in Ethiopia, and in Africa at large. He welcomed Italy’s decision to open an Investment Coordination Office for Africa in Addis Ababa, and the talks held by Mr. Pestilli with the Prime Minister and other senior officials to strengthen the relationship of the two countries.

In addition to its current development cooperation, Italy has agreed to commit 98 million euro of development assistance over the period 2013- 2015. Dr. Tedros also briefed Mr. Pestilli on the current situation in Somalia and in South Sudan. He said the IGAD-moderated South Sudanese negotiations in Bahr Dar were moving well, and Somalia was showing positive political and security progress with its leaders demonstrating a commitment to a stable Somalia. On Eritrea, Dr. Tedros expressed his concern over the continuing human rights violations including the continued detention without charge, trial or legal counsel of the eleven prominent politicians held since September 18, 2001, as well as continued detention of numerous journalists, also held without charge or trial.

Equally, he said, Eritrea’s continued interference in the region and its efforts to destabilize showed there had been no changes in Eritrean policy. He said the international community should urge the Government of Eritrea to stop supporting Al-Shabaab, respect international laws and fully co-operate with the UN, AU and other partners to ensure peace and stability in the Horn of Africa.

For Regional strategic Issues:  Ahmedou Ould-Abdallah, the UN envoy for Somalia in 2008, confirmed to Al Jazeera the world body has “reliable information” that European and Asian companies are dumping toxic waste, including nuclear waste, off the Somali coastline.

“I must stress however, that no government has endorsed this act, and that private companies and individuals acting alone are responsible,” he said

The pirates are holding the MV Faina off Somalia’s northern coast. Allegations of the dumping of toxic waste, as well as illegal fishing, have circulated since the early 1990s.

“Somalia has been used as a dumping ground for hazardous waste starting in the early 1990s, and continuing through the civil war there,” he said.

“European companies found it to be very cheap to get rid of the waste, costing as little as $2.50 a tonne, where waste disposal costs in Europe are something like $1000 a tonne.

“And the waste is many different kinds. There is uranium radioactive waste. There is lead, and heavy metals like cadmium and mercury. There is also industrial waste, and there are hospital wastes, chemical wastes – you name it.”

According to Geeska Afrika Online archives, In 1992, a contract to secure the dumping of toxic waste was made by Swiss and Italian shipping firms Achair Partners and Progresso, with Nur Elmi Osman, a former official appointed to the government of Ali Mahdi Mohamed, one of many militia leaders involved in the ousting of Mohamed Siad Barre, Somalia’s former president.