Home frontpage Ethiopia: It Is Becoming Ubiquitous – A Boon or Bane? 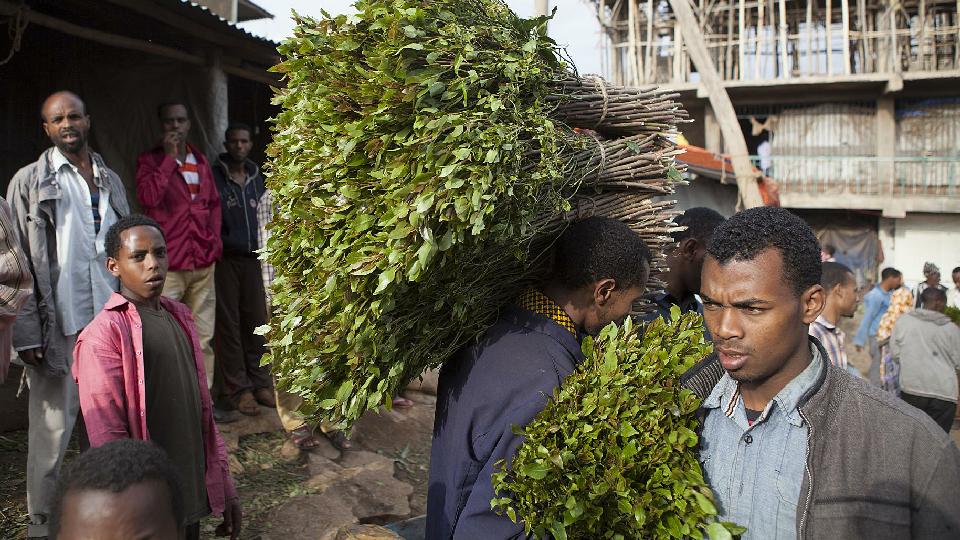 Nairobi (HAN) October 19, 2015 – Public Diplomacy and Regional Investment Initiative News. By Asmamaw Getaneh. The merit and demerit of Khat must be well identified Long back, in Ethiopia, especially in the majority of small towns and in rural parts, chewing Khat was quite strange, and even it was considered as a deviation from normal behavior, culture, norm and social cohesion. Today, the prevailing attitude for the majority turns out to be quite the contrary.

Chewing Khat is spreading fast in almost all urban areas and in some rural localities. The demand for those hypnotic leaves is ever on the rise; it can better be characterized as inelastic—prices of Khat do show insignificant variation in response to the market supply. Consequently, more and more farmers are taking on growing Khat as a basic source of income as the market for it is so lucrative that several farmers are replacing their vegetable gardens with Khat production.

Surprisingly, a quarter of a century ago, chewing Khat used to be taken a perilous addiction, and the market for Khat was limited mostly to certain parts of the country especially in urban areas. Addicts were construed to be more eccentric and irrecoverably possessed by their risky habits of using stimulant substances such as smoking tobacco and chewing of Khat. With a steadily rising demand, the production of Khat can have considerable potentialities to configure the traditional vegetable and fruit cultivation in rural areas wherever this cash crop can grow.

As one of the major cash crops, the contribution of Khat towards national revenue, especially if it is produced on a large scale, is quite promising. From the point of view of production, Khat provides certain better opportunities to growers. In relative terms, the production of Khat requires less water.

Khat grows well in hot climatic regions, and has superb drought resisting capabilities. It also requires less labor and other inputs compared to the production of say vegetables or fruits. Moreover, depending on suitability of soil and climatic conditions, producers can have three or more harvests in one year. This gives Khat growers good opportunities to supplement their incomes, particularly to producers in rural areas where there is lack of irrigation opportunities and thus harvests are limited to once a year.

Again, Khat sells at far better prices than most vegetable products. Khat also gives better yields per unit of farmland. Due to these and other benefits it renders, the production of Khat is slowly but surely exhibiting increasing trends. Provided that current demand is sustained in the long run, the market for qhat will grow more and more lucrative and production is likely to rise.

Nevertheless, there is an existing dilemma towards the burgeoning consumption of Khat and the profitable market thereon. Chewing Khat is a waxing whirlpool which takes a disquieting proportion of the youth in the urban areas the vortex of addiction. Khat often when the rising use of Khat is a topic on the plate, there is a tendency to associate it towards the unemployed youth as a perturbing social dilemma.

The latent assumption is that these groups of youth resort to chewing Khat as an option to pass time and fend off the depressive effects of boredom. Nonetheless, the consumption of Khat is quite widespread within other cross-sections of the society. Foremost among these are university students, teachers, merchants, night shift workers in pubs and nightclubs, and high school students who prepare for exams. With the community of students, consumption of khat exhibits significant seasonal variation, the peak times being exam periods. Chewing khat cannot be as such taken as an option by the unemployed simply because they could not have the money to afford for it. Through time, chewing khat is spreading into wider sections of our society.

The fact that significant numbers of university students and teachers are resorting to increasing consumption of khat has strong implications for other parts of the society, mainly for students in secondary schools. Undeniably, the university community is accorded a higher place by the society as a source of scientific knowledge and of highly educated citizens. Consequently, behaviors of students taken on by university students do have exemplary influences on prospective university entrants and students in secondary schools. When teachers come into the scene, the dilemma towards chewing chat steps up into sizeable magnitudes. Why should chewing qhat be considered as a potential problem while a growing number of the educated are allured into it?

A much more concern would be the amount of time frittered away in chewing khat. While time is such a scarce resource, it is quite disheartening to hear people claim that they chew qhat, and drink alcohol just to ‘pass’ their time. This trend is indeed dangerous especially when it is deemed so by the youth.

Those who chew khat waste away a great deal of time sitting idle. A growing body of the youth is wasting away precious time, as much as 4 or 5 hours a day, especially in the afternoons. Chewing khat induces users to drinking, consumption of other related drugs, promotes unproductive use of time, and has the potential to increase the likelihood of violence and crime.

While the market for khat is so lucrative, khat houses are also providing other drugs, both mild and strong for users. Hence the khat market has considerable potentials to pave the way for the market for other drugs. No doubt that the extensive use and unchecked regulation of qhat and other drugs would be dogged by devastating consequences as has been witnessed in other parts of the world such as Mexico.

More important however is the dilemma as to whether or not khat is considered as one of the drugs. On the one hand, khat is a cash crop, and contributes substantially to the national revenue. If so, discouraging and banning would be self-defeating. Allowing it, or even legalizing it might be better, but the trend is very hazardous in the long-run. To follow an indifferent approach with no clear strategy as to the issue of drugs would not evidently be a viable choice.

There would be no option to deal with problems when they arise. Hence there has to be clear legal provisions as to the use and circulation of khat and similar other substances. With the trends of current demand continuing, the price of khat will definitely rise which makes it downright expensive for the poor. Addiction is unlikely to be broken within the short-run, hence an upward trend for the use of khat and other related stimulant substances. The only thing that has toned down the problem of khat consumption insignificant in our country is the fact that it is not illegal.

In conclusion then, what would be our approach towards the rising consumption of khat in our country? Do we have a clear and comprehensive strategy to deal with the booming qhat market, and the swelling demand for those miraculous leaves? Or should we continue indifferent to the existing dilemma?

In my opinion, it is high time that we develop clear strategies towards the emerging khat market and the mounting demand for it. There has to be a consensus as to the use of khat and the disparate yet expanding market for it. The ambivalent perception towards the existing consumption of khat should not be allowed to continue into the future until it may soon or later pose insurmountable challenges to legislation.

We have to work out clear answers whether chewing khat should be legalized or outlawed. If the consumption of khat is prohibited by law, so too should be the domestic market for it. If legal prohibition of khat would open the Pandora’s Box, we have to formulate a clear strategy supported by the necessary legislation.