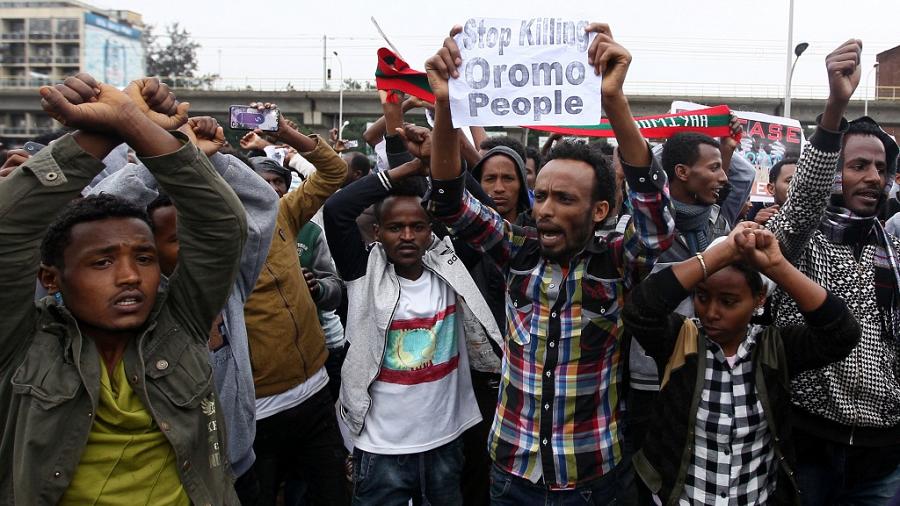 LONDON(HAN) August 14.2016. Public Diplomacy & Regional Security News. BY:Moses Karanja, Maria Xynou and Arturo Filastò. Nearly 100 deaths and thousands of arrests have been reported in Ethiopia over the last days, as part of protests against the marginalization and persecution of the Oromos and Amharas, Ethiopia’s two largest ethnic groups. But the attacks and arrests may not have been the only forms of retribution carried out by the Ethiopian government in its crackdown against protesters.

Last weekend, the internet was reportedly shut down in the country.

In an attempt to understand whether the internet was in fact shut down, we looked at some public sources of data that contain information about internet traffic. Such data provides strong indicators that the internet was most likely shut down during the Ethiopian protests last weekend, though it remains unclear if this occurred in all regions and/or on all types of networks across the country.

Ongoing protests have been carried out by Ethiopia’s Oromo people since November 2015, marking one of the most significant political developments in Ethiopia in recent years. These protests were sparked by the introduction of theAddis Ababa City Integrated Master Plan, which aims to expand the territorial limits of the country’s capital into neighbouring Oromo towns, threatening to displace millions of Oromo farmers and bring the Oromo-dominated region under Tigray-led federal government.

The unprecedented wave of protests has resulted in more than 400 deaths over the last months, according to a recentHuman Rights Watch report.

More protests sprung up in the Amhara regional state, with protesters requesting for political reforms and specifically, the Welkait community demanding that ancestral land currently administered by the Tigray regional state be moved into the neighbouring Amhara region.

The new-found unity between the two historically antagonistic communities of the Oromo and Amharas against a common adversary, the TPLF-led government, seems to have raised the tension in the country. The security forces response has been extreme, with observers comparing it to the 2005 post-election violence where nearly 200 people were killed. This time though, at least 30 people were reportedly killed in the Amhara region in one day alone.

Protesters relied on the internet to plan, mobilize and coordinate with each other and this may have prompted the Ethiopian government to pull the plug on the internet even before the planned protests started.

But this is not the first time that the Ethiopian government appears to be restricting access to the internet this year.

Last month, the government reportedly blocked social media sites across the country after University entrance exams were leaked on Facebook by an Oromo activist, as a form of protest against the government.

Public data from last weekend indicates that the internet was shut down in Ethiopia during the heat of the protests, but it remains unclear if this occurred nationwide.

The graphs below illustrate that while internet traffic appeared to be originating from Ethiopia up until August 5th, such traffic was suddenly terminated until August 8th, indicating that the internet was probably shut down. The following graph, which we created based on tweets geotagged in Ethiopia from 3rd-9th August, also illustrates a decrease of Twitter activity. Similarly, Tor metrics data below illustrates that there was a decrease in the usage of Tor last weekend, which could be viewed as an indicator of the internet being restricted or shut down in certain types of networks. The data included in the graphs above shows that while the internet was likely shut down in certain regions and/or types of networks, it probably wasn’t shut down completely across Ethiopia. It might also have been the case that access to certain websites was restricted in regions and/or networks where the internet was accessible, though we unfortunately don’t have any recent OONI measurements from Ethiopia to verify this.

In the recent case of Ethiopia, shutting down the internet in the middle of intense protests likely not only had an effect on the mobilization and coordination of protesters, but also on the communication between families and friends of victims. This also likely had an effect on journalists reporting on the protests in real-time on the ground, if they were using networks that were blocked.

An Al Jazeera reporter in Addis Ababa cited difficulties to connect to the internet and restricted travel to protest zones as a cause for limited coverage of the protests.

But Ethiopia is not the only country restricting access to the internet during political events.

At least 20 cases of internet shutdowns have been documented worldwide over the last six months alone. In response to this, Access Now is leading a campaign in collaboration with organizations around the world called #KeepItOn.

The #KeepItOn campaign aims to document and raise awareness about internet shutdowns around the world. We support this campaign, and we hope you will too.

This article was drafted as part of a collaboration between OONI and the Centre for Intellectual Property and Information Technology Law (CIPIT) department of Strathmore University.