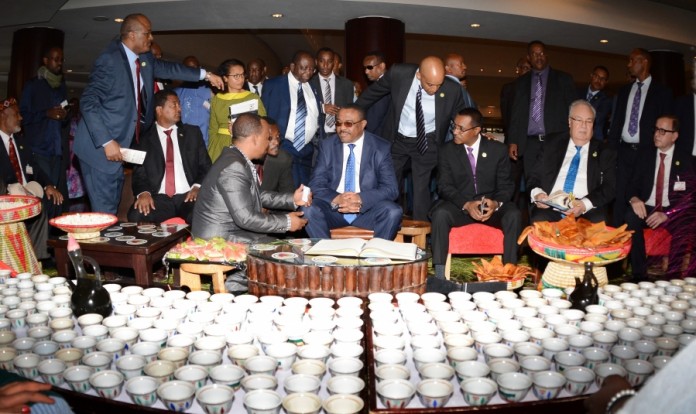 ADDIS ABABA (HAN) March 8,2016. Public Diplomacy & Regional Security News. BY ABEBE WOLDEGIORGIS. The coffee industry enjoyed a multi-billion dollar turn over business all over the wold and it is a source of revenue for many countries. In addition to that, it plays crucial role in creating value chain from growers to traders, processors, exporters and importers on global level. However, due to the rampant unfair trade system, the business is left to be manipulated by multinational companies to the disadvantage of coffee growers, the situation also worsened by global warming.

Opening the 4th World Coffee Conference with the motto: ‘Nurturing Coffee Culture and Diversity” here yesterday, Prime Minister Hailemariam Dessalgn said that economic inequality and climate change are not the only threat to the coffee industry. For coffee farmers across the globe, the volatility of coffee price is a major challenge. The scenario is even worse for small holder growers whose profit margin is already very thin. He further said that a drop in price doesn’t represent a decline in quarterly profits but it also threatens small scale coffee growers ability to feed and care their families.

According to the Premier, the poverty of small scale coffee growers is not the only threat to coffee production, rising temperatures, a decline in rain fall and an increase resilient pests and plant diseases all endanger the coffee industry. Climate change is a serious threat to the industry and its impact extremely felt by coffee growers.

Farming and Natural Resources Development Minister Tefera Derbew on his part said: ” As a source of livelyhood for millions of coffee growers, processors and traders, coffee has an immense economic and social significance in Ethiopia. While the country has prime soil types and climate conditions for coffee production, the government and coffee growers of the country have long been making concerted efforts to further improve its quality and productivity.”

As to Tefera, the government is equally committed to preserving the unique flavour of Ethiopian origin coffees which are recognized and appreciated by coffee lovers all over the world.

The Executive Director of the International Coffee Organization Roberio Olivera Silva also said: “Though coffee demand is growing from time to time in the world market, paradoxically its price is declining and this implies how coffee exporting countries are in a disadvantageous position.”

To change the situation, coffee exporting countries should voice their concern in the international platform. In addition, to mitigate climate change they should develop climate resilient economy.