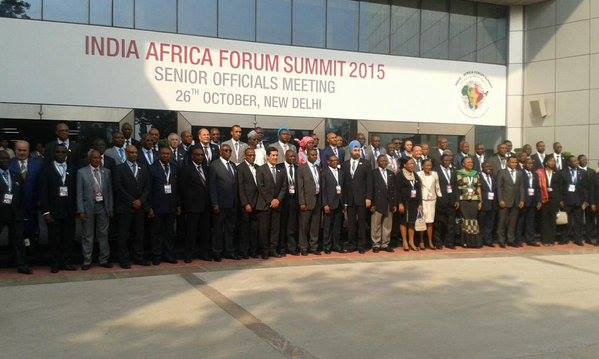 NEW DELHI (HAN) October 26, 2015 – Public Diplomacy and Regional Security and stability Initiatives News. India hosts its biggest-ever Africa summit this week as Prime Minister Narendra Modi seeks to challenge China’s dominance on a continent that is blessed with vast natural resources and has the world’s fastest-growing population.  New Delhi wants to project its soft power and historical ties to Africa, in contrast to China’s focus on resource extraction and capital investment that has sparked a backlash in some countries against Beijing’s mercantilist expansion. Of the 54 countries invited, the hosts expect more than 40 to be represented by their heads of state and government who, after a series of ministerial meetings, will hold a full summit on Thursday.

India’s trading ties with Africa date back to antiquity and both found common cause in the struggle against colonial rule. Yet India’s influence faded over the course of the Cold War as it withdrew into non-aligned isolation.

Now Modi, self-styled chief salesman of a “Make in India” export drive, wants to capitalise on an economic slowdown in China to highlight India as an alternative partner for trade and investment.

“India is the fastest-growing major economy. Africa is experiencing rapid growth too,” Modi told African journalists on the eve of the summit.

Although India’s headline economic growth has overtaken China’s, its economy is one-fifth the size and it lacks the financial heft to challenge Beijing in a head-to-head contest for the African market.

“We can’t match the Chinese in terms of resources – but any engagement we do with the Africans at least gives them a choice,” said C. Raja Mohan, a foreign policy commentator at the Observer Research Foundation in New Delhi.
The India-Africa Forum Summit is the third of its kind and, since the first was held in 2008, two-way annual trade has more than doubled to $72 billion.

That lags trade between China and Africa, which has exploded to $200 billion as the world’s No.2 economy sucks in oil, coal and metals to feed its industrial machine.

The world’s largest democracy has been criticised by human rights groups for inviting Omar al-Bashir, the president of oil-rich Sudan wanted by the International Criminal Court on charges of war crimes, crimes against humanity and genocide in Darfur.

State-run oil company ONGC, which has fields in Sudan and South Sudan, is on the hunt to buy $12 billion in foreign assets over the next three years and has identified Africa as an investment target. India is also in talks with South Africa to buy coal mines producing up to 90 million tonnes of coking coal each year to feed its growing steel industry. South Africa is already a major coal supplier to India.

Still, India wants its involvement in Africa to be less transactional than China’s, seeking a development partnership for two regions that account for a third of the world’s people, but seven in 10 of those living in poverty.

“Our partnership is not focused on an exploitative or extraction point of view, but is one that focuses on Africa’s needs and India’s strengths,” said Vikas Swarup, spokesman for the Indian Ministry of External Affairs.
Trade ministers from India and Africa are looking to make common cause at a World Trade Organization ministerial meeting in Nairobi next month, Commerce Minister Nirmala Sitharaman said.

Although India dropped its veto against a WTO deal to streamline customs procedures a year ago, it remains uneasy over Western pressure on food stockpiling it says is vital to ensure its 1.25 billion people don’t go hungry.

“India and Africa are on the same page,” Sitharaman told reporters.

Ethiopia:Senior Officials’ Meeting underway ahead of the Official Opening of the Third India-Africa Business Forum Summit (IAFS) 2015, at Indira Gandhi Stadium Complex, New Delhi India. Finalization of the Outcome Document for the Third IAFS is expected later today. The Ethiopian Delegation, headed by Ambassador Wahde Belay, Permanent Representative to the African Union is in attendance. mfa