Home frontpage Ethiopia in a Bid to Stem a Brutal Civil War in South... 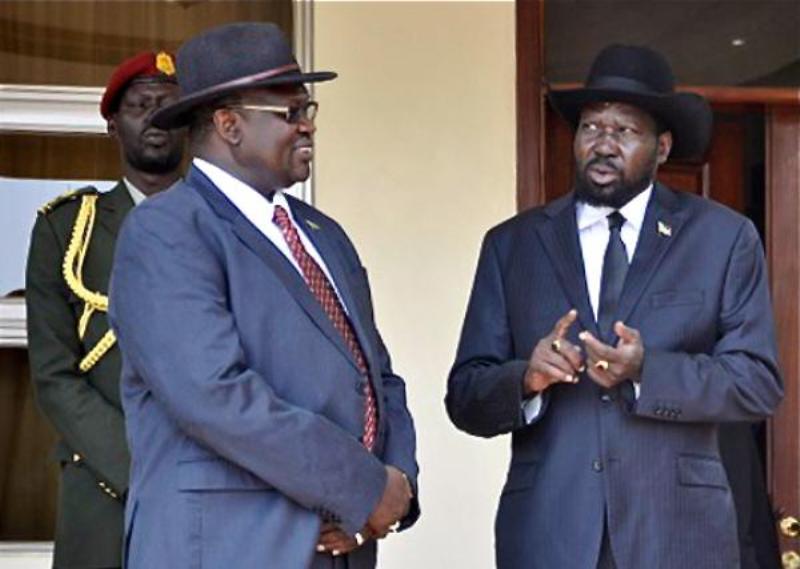 Khartoum (HAN) May 9, 2014 –   South-Sudan will agree the IGAD draft Agreement, diplomatic  sources told Geeska Afrika Online.  Sout Sudan Leaders with the International Mediators and the IGAD frontline state led by the former Ethiopian Foreign Minister Sayum Mesfin said the “critical meeting will help end the violence and killings in South Sudan”, and try to find a “political solution to the crisis,” according to the IGAD and East Africa  statement told to the Geeska Afrika Online Security Reporter in Addis Ababa.


For the First Time President and rebel chief will meet for direct talks on Friday in Addis Ababa, Ethiopia, since ethnically targeted violence broke out in December, killing thousands of people and forcing more than 1.3 million to flee their homes. The talks between President Salva Kiir and his former vice president, Riek Machar, are expected to last one day.

“I don’t believe that they will meet and reach an agreement straight away. But if they can agree on a broad-based process on how to resolve the conflict, end the fighting, that would be a step forward,” Susan Page, the U.S. ambassador to South Sudan, said during a radio call-in show. “People want peace. People don’t understand why the country should go into war just less than three years since independence,”  the U.S. ambassador added later.

According to the IGAD draft agreement which regional leaders believe will create a firm foundation for peace, reconciliation and reconstruction of the world’s youngest nation, demands parties to “cease hostile media and other propaganda campaigns including any action that may undermine the peace process…particularly those that fan ethnic hatred, through any form of media.”

Riek Machar told UN Secretary General Ban Ki-moon, who visited the South Sudan capital Juba on Tuesday in a bid to push peace efforts amid dire warnings of the risk of famine, that he “will be present” at peace negotiations in the Ethiopian capital. The United States on Tuesday unveiled its first sanctions in response to the “unthinkable violence” in the world’s youngest nation, targeting one military leader from each side. The move against presidential force commander Marial Chanuong and rebel general Peter Gadet follows a visit by US Secretary of State John Kerry to Juba last week, where he called on both sides to lay down their arms. South Sudan’s foreign ministry spokesman Mayen Makol dismissed the sanctions as “unhelpful”. “The international community needs to help rather than imposing sanctions,” Makol said. The war has claimed thousands — and possibly tens of thousands — of lives, with over 1.2 million people forced to flee their homes. Almost five million are in need of aid, according to the UN. “The conflict destroying this fragile young country is senseless,” Ban said Tuesday, warning that if fighting continues one million people could soon face famine. A January ceasefire was never enforced, while stop-start peace talks in Ethiopia have spent weeks squabbling over even just the basic agenda. South Sudan Minister of Information Michael Makeui, head of the government delegation in Addis Ababa, said he was “optimistic for peace” but could not predict if talks would start on time, and how long they would take. Aid agencies are warning that South Sudan is now on the brink of Africa’s worst famine since the 1980s, while both Kerry and the UN human rights chiefs have spoken out over their fears that the country could slide towards a genocide. Although starting as a personal rivalry between Kiir and Machar, the conflict has seen armies divide along ethnic lines and fighting pitting members of Kiir’s Dinka tribe against Machar’s Nuer.The conflict erupted on December 15 with Kiir accusing Machar of attempting a coup. Machar then fled to the bush to launch a rebellion, insisting that the president had attempted to carry out a bloody purge of his rivals. India.