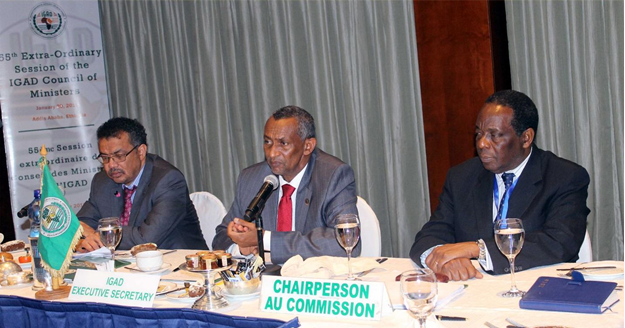 ADDIS ABABA (HAN) February 1, 2016 – Public Diplomacy and Regional Stability Initiatives News. According to a press release issued by the Member states of the Inter-Governmental Authority on Development (IGAD) confirmed they had reached an consensus that Somalia needs more economic, military and political backing to deepen peace and stability in the war-torn country.

The statement also talked about the thorny issues in South Sudan.

The IGAD Council of Ministers held its 55th Extra-Ordinary Session in Addis Ababa on 30-31 January 2016 under the Chairmanship of H.E. Dr. Tedros Adhanom, Minister of Foreign Affairs of the Federal Democratic Republic of Ethiopia and Chairperson of the IGAD Council.

The Council was briefed by H.E. Dr. Abdusalam Omer and IGAD Special Envoy to Somalia H.E. Ambassador Mohamed Abdi Affey on the situation in Somalia. The Council also received briefings from H.E. Dr. Barnaba Benjamin, Minister of Foreign Affairs of the Republic of South Sudan and H.E. President Festus G. Mogae, Chairperson of the Joint Monitoring and Evaluation Commission (JMEC) on the current situation of the Republic of South Sudan.

After discussing and exchanging views on the briefs and reports,

On Somalia :
The Council,

2. Supports the Federal Government’s decision on a model for the 2016 elections and directs the IGAD Office for Somalia to assist the Federal Government and regional federal states to ensure an inclusive and consensus based implementation of this model. In this regard, requests IGAD Member States and international partners including the UN’s collaboration in confronting spoilers of Somalia’s political and security process in this vital year of 2016.

3. Decides to establish an IGAD Ministerial team composed of the Chair (Ethiopia) and Rapporteur (Kenya), Djibouti and Uganda to support the Federal Government’s engagement with federal states in order to ensure the smooth and timely implementation of this electoral model.

4. Urges the Federal Government to rapidly conclude the remaining Hiraan and Middle Shabelle state formation process and the on-going dialogue and reconciliation between the Galmudug Federal State and Ahlu SunnaWal Jamaa (ASWJ).

5. Commends the continued courage and commitment of AMISOM and Somalia National Security Forces and condemns the recent Al Shabaab attacks in El Adde and at the Lido beach in Mogadishu as well as all attacks against the civilian population. The Council notes that significant progress has been made since AMISOM’s initial deployment in 2007 but agrees that the attacks in Leego, Janaale, El Adde and Mogadishu, show that overall progress remains fragile.

6. Welcomes the offer made by the Foreign Minister of Djibouti that his country hosts a Summit level meeting of AMISOM Troop Contributing Countries before the end of February 2016 to consider proposals on how to revitalize the current campaign, secure outstanding force enablers, deliver effective command, control and co-ordination across sectors and establish a sustainable financing framework and requests the African Union Commission to urgently initiate preparations for this meeting.

7. Recommends that the AMISOM TCC Summit is preceded by an African Union Commission expert level meeting bringing together TCC Chiefs of Defense and the Somalia National Army leadership to develop concrete proposals for adoption by the February 2016 Summit meeting.

8. Welcomes the appointment of His Excellency Donald Kaberuka as the African Union’s High Representative for the African Union Peace Fund and recommends the establishment of an AU, IGAD, UN joint expert working group to develop proposals for sustainable AMISOM financing. The experts’ findings and proposals will be presented at the February 2016 AMISOM TCC Summit.

9. Commends the Federal Government of Somalia’s decision of 9 September 2015, to fast-track public financial management reform within the security sector and urges swift implementation and international support to this important initiative as AMISOM’s exit and the IGAD region’s security is directly linked to the ability of the Federal Government of Somalia to predictably finance and manage its security forces and institutions.

10. Notes with concern that the IGAD sub-region is facing a number of inter-related transnational security threats- most notably increased levels of terrorism and radicalization and recognizes that the recent worrying pledges of allegiance to the Islamic State (IS) by some Al Shabaab elements and the regional security implications of the Yemen conflict have highlighted the need for effective mechanisms for joint security co-operation to tackle the most critical common security threats.

11. Recommends the establishment of a Regional Security Co-operation Framework (RSCF) between Somalia and its neighbors and the establishment of a platform for regular security dialogue and co-ordination to address common security threats and challenges and decides to hold a Ministerial meeting with relevant IGAD member states to implement this initiative on the sidelines of the February 2016 AMISOM TCC Summit meeting in Djibouti.

12. Reaffirms the strong solidarity among IGAD member states and their commitment to continue supporting state-building and reconciliation in Somalia and expresses appreciation for international partners and organizations that are currently providing financial, material and technical assistance to Somalia.

13. Commends the critical role that the IGAD Office of the Facilitator for Somali Peace and National Reconciliation continues to play in supporting the implementation of the Federal Government’s Vision 2016.

14. Proposes that the next IGAD Assembly of Heads of State and Government be held in Mogadishu.

On South Sudan:
The Council,

1. Welcomes the commencement of the work of the Joint Monitoring and Evaluation Commission (JMEC), the Ceasefire and Transitional Security Arrangement Monitoring Mechanism (CTSAMM), the National Constitutional Amendment Committee (NCAC) and the Joint Military Ceasefire Commission (JMCC), but notes the limited progress to date in most aspects of the implementation of the Agreement on the Resolution of the Conflict in the Republic of South Sudan (ARCSS).

2. Further welcomes the agreement between the Parties on the selection of ministerial portfolios and the Parties’ continued compliance with the Permanent Ceasefire in most parts of greater Upper Nile, given the fragility of the security situation throughout the country.

4. Commends the Chairperson of JMEC for his tireless efforts to implement the Agreement, reiterates its full support for the Terms of Reference of JMEC while reaffirming the need for consultations between the Chair and IGAD regional leaders.

5. Expresses concern at the ongoing violence in Western Equatoria and Western Bahr el Ghazal, and demands that the Parties take all necessary actions to ensure that the Permanent Ceasefire is fully respected.

6. Appalled by the deterioration in the humanitarian situation in South Sudan, and demands immediate action by the Parties to ensure unconditional humanitarian access across the country to avert further crisis and tragedy.

7. Concerned by the recent decision of the Government of South Sudan to implement the October 2, 2015 Presidential Decree on the creation of 28 new states, given that such action is inconsistent with the terms of ARCSS. However, Council underlined that this should not delay the formation of the Transitional Government of National Unity (TGoNU) and urges the rapid formation of the TGoNU to enable dialogue on this matter.

9. Demands the full and unconditional implementation of the Agreement by the Parties.

10. Calls on the Parties to immediately implement, by no later than the first week of February 2016, the first phase of the Transitional Security Arrangements for Juba in order to provide for the establishment, without further delay, of the TGoNU.

11. Further calls on the Parties comprising the TGoNU to immediately embark on addressing the humanitarian, economic, and security challenges that the country faces once the new government is formed.

12. Urges the Parties, subsequent to the formation of the TGoNU at national level, in the absence of agreement on the creation of new states, to suspend further action on implementing the operationalization of new states until an inclusive, participatory National Boundary Commission comprising all Parties to ARCSS reviews proposed states and their boundaries, and that this review process occur, for a period of up to one month.

13. Indicates to the Parties that in the event there are outstanding disputes at the end of the boundary commission review process, the Parties should revert to the provisions of the Agreement.

14. Calls on the Parties to incorporate the Agreement into the transitional constitution as signed, but confirms that the TGoNU can be formed on the basis of ARCSS, and the provisions which render it supreme to the constitution.

15. Calls on the African Union Peace and Security Council (AUPSC) and the United Nations Security Council (UNSC) to affirm their commitment to supporting JMEC and the Agreement, including their willingness to support consequences, should the Parties further fail or refuse to implement the Agreement, and asks the AUPSC and the UNSC to review the progress made in implementation within two weeks of this meeting.

1. Takes note of the intensive processes undertaken by the Secretariat and the IGAD Member States to develop the five year strategy of 2016-2020 and further notes the endorsement of the IGAD Strategy (2016-2020), Institutional Strengthening Action Plan (ISAP) III and IGAD Operational Plan 2016 by the IGAD Committee of Ambassadors.

1. Directs the Executive Secretary to transmit the contents of this communiqué to the AU Assembly.

2. Expresses its appreciation to the Government and the people of Ethiopia for hosting the 55th Extra-ordinary Session of the IGAD Council of Ministers.

3. Decides to remain seized of the political and security issues in the IGAD region.

Issued this 31st of January 2016 in Addis Ababa, Ethiopia