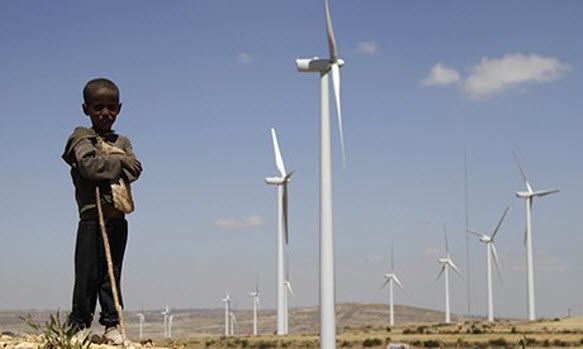 ADDIS ABABA (HAN) November 9, 2015. Public Diplomacy & regional Security. Ethiopia is hugely investing in energy especially in renewable energy which enables the country to be the leading manufacturing hub and power exporter in Africa. Chairman of the Executive Board for 2016 World Energy Congress has said Ethiopia’s drive towards building environment friendly energy is a pulling factor for more FDI.

Board Chairman Assistant Professor Hassan Mura Mercan, who is also Turkish Deputy Minister of Energy and Natural Resources, said Ethiopia is becoming one of the most preferred countries in sub-Saharan Africa for foreign companies due to its affordable and sustainable energy potential.

Ethiopia is hugely investing in energy especially in renewable energy which enables the country to be the leading manufacturing hub and power exporter in Africa, the Chairman said. Ethiopia’s effort to generate and supply cheap renewable energy to manufacturers and neighboring countries is exemplary, he stated.

He also appreciated the country’s strong environmental mitigation policy in the energy sector which is a major feature to tackle challenges of climate change. Ethiopia has been at the front of the energy debate for nearly a decade, he said, adding the country represented the whole of Africa at events of importance to the continent.

Assistant Professor Mercan also said the world should promote the sustainable supply and use of energy for the greatest benefit of all. He urged Turkish companies to invest more in Ethiopia particularly in the energy sector.

Ethiopia’s improved investment climate will attract other investors to look for more options in the investment sector, he added. World Energy Council Chief Operator Officer, Emily Melton on her part said the government and leaders in Ethiopia are doing a lot to develop energy and are committed to make better use of the country’s abundant energy potential.

She said the World Energy Council will extend support to Ethiopia’s energy sector through providing financial and technical assistance. Ethiopia is promoting energy efficiency and conservation to address losses in energy production, transmission and distribution, the officer said, adding it is improving the efficiency of utilization in industrial, commercial, transport and household sectors.

The country’s ambitious grand renewable energy goals also go in harmony with the UN General Secretary’s global initiative for “sustainable energy for all,” she added. It was indicated that Ethiopia will take part in the 23rd World Energy congress which is expected to be held in Istanbul, Turkey between October 9 and 13/ 2016. The event brings together over 10,000 major global energy stakeholders, representatives of the private sector, ministers and CEOs.