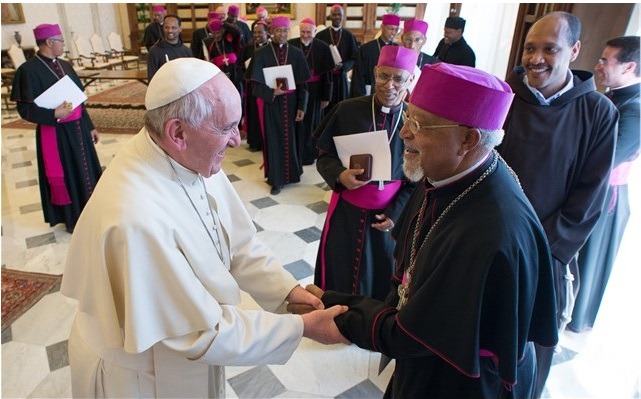 Addis Ababa (HAN) January 20, 2015- Public diplomacy and Regional Catholic church News.  The Catholic Holy Father in Rome, Pope Francis has erected a new Diocese in Ethiopia which will be known as the Diocese of Bahir Dar , Dessie. In another development, Pope Francis has also erected the Metropolitan Church of Asmara in Eritrea.
The Metropolitan Church of Asmara in Eritrea: Pope Francis has established a new Eastern Catholic church for Eritrea– the first Eastern Catholic church formally erected since the early 20th century. Eritrean government  has been criticized by human rights organizations for government repression and systemic violations of religious freedom.

According to a January 19 announcement from the Holy See Press Office, Pope Francis has separated the four Eritrean eparchies (dioceses) from the Ethiopian Catholic Church and has created a new metropolitan sui iuris church for Eritrea. The Pontiff has named Bishop Menghesteab Tesfamariam of Asmara, Eritrea’s capital, as the church’s first metropolitan archbishop. The metropolitan archbishop of Asmara will henceforth be head of the church.

Relations with neighboring Ethiopia have been tense for decades. Eritrea was the less powerful partner in the short-lived Federation of Ethiopia and Eritrea (1952-62), with Ethiopia formally annexing Eritrea in 1962. The Eritrean War of Independence lasted until 1991, and Eritrea became independent in 1993. The two nations were again at war from 1998 to 2000.

Eritrea, a Nation of 6.5 million, has 155,000 Catholics, all of them in Eastern-rite jurisdictions. The Eritrean Orthodox Church, an Oriental Orthodox church that separated from the Coptic Orthodox Church (with Coptic consent) in 1998, has 1.5 million members. The majority of Eritrean people are Muslims.  sources: Catholic World News (January 19, 2015).