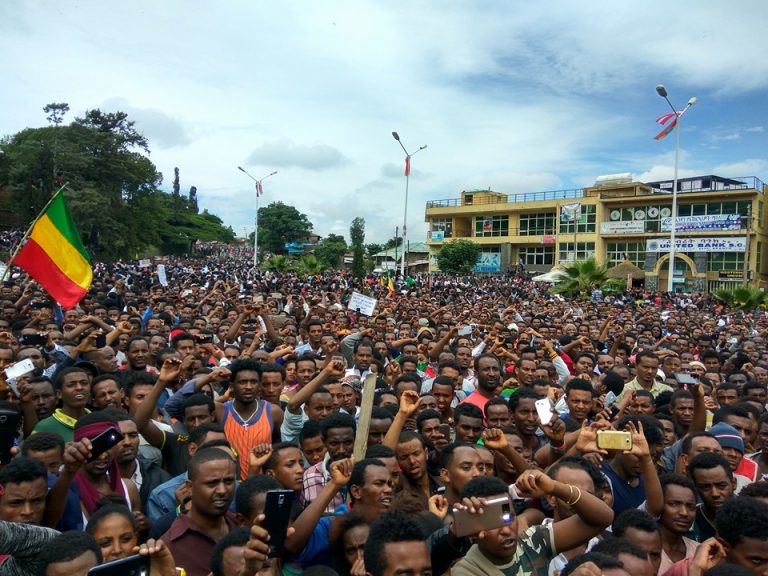 GONDAR (HAN) July 31.2016. Public Diplomacy & Regional Security News. Hundreds of thousands of people held a peaceful demonstration in Gondar and other towns denouncing the regime and saying enough to tyranny.

Residents of Gondar and its environs headed to the central square of this historic city in the early hours of the morning on Sunday, despite the presence of thousands of regime forces who, in some villages, tried to prevent people from joining the demonstrations. They were, however, overcome by the unwavering but peaceful protesters who were determined that they were not backing up.

They chanted slogans denouncing dictatorship and an end to the regime. They also called for the release of political prisoners, including members of a committee that heads the campaign by the people of Wolkait, Tegede and Telemt in north Gondar, who were forcefully annexed to Tigray region.

The demonstrators have also vowed to restore their identity and territory that’s being tarnished by the tyrannical regime.

The demonstrators, in a show of solidarity, called for an end to the killings perpetrated by the regime in the Oromo region in the last eight months; and for the release of the tens of thousands incarcerated by the regime.

The demonstrators also expressed solidarity with Ethiopian Muslims who have been the target of persecution by the regime that falsely accuse them of terrorism. They also called for the release of leaders of the Muslim community who have been detained by the regime for peacefully demanding their religious rights.

They denounced the regime for agreeing to give away a vast Ethiopian territory to the Sudan and vowed to protect their land which they said was legitimately theirs.

Reports also show similar protest in towns such as Maksegnit, Eske and other localities in Gondar.