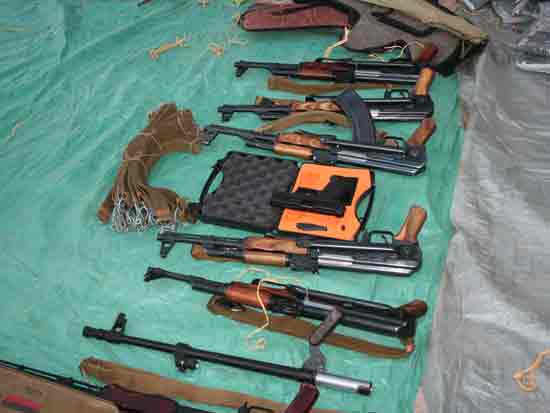 Guns are owned [by citizens/individuals] both legally and illegally in our country. How does that come up? What is the current state of small arms and light weapons smuggling in the country?

Possession of arms in our country is an old habit. It is a cultural thing. And people use it for the purpose of self defence. As a result of the gaps in the accessibility and execution of our laws, and modernization of the society, people want to arm themselves, especially in rural and border areas. As there is this belief that arming oneself provides better protection than the law itself, it serves as one reason for some people to possess arms. The other reason is that the possession of arms is seen as an expression of status and bravery in some societies. This belief also plays its own role. The need to protect oneself from any kind of criminal enterprises such as burglars and intruders also serves as another reason for the possession of arms. Especially in pastoral areas, pastoralists not only bear arms to protect themselves, but also to protect their animals/livestock from wild animals. In border areas, it is justified to carry arms to protect themselves from cross-border looters.

In addition to the cultural connotation I mentioned above, there is a political underlining to it as well. Anti-peace elements in our country smuggle illegal arms through various routes to carry out their own objectives. Also, on top of using them for various criminal activities like organized crime, contraband trade, it also serves as source of income for some section of the public who are involved in illegal arms trade.

There is another element in it as well. Our country is going through an unprecedented and exemplary development within the last 25 years. And there are both domestic and foreign elements that don’t want to see this. To this end, these elements are involved in activities to destabilize the country, which spikes the inflow of illegal arms. The destabilized states of some of the Horn of Africa and neighbouring countries have also their own contribution.

Although we don’t have official numbers, seeing from the seizures, there is an upward trajectory with regards to the inflow of illegal arms into the country. It is for the purpose of controlling this situation that an arms trafficking, licensing and registration law is being prepared.

Many arms have ended up in the possession of various individuals illegally. What factors brought such things; and are there specific point of entries for illegal arms that have been identified?

As its known, the Derg had one of the largest and fully armed military in the continent. After the demise of the Derg, there were a lot of arms floating around the country unaccounted for. According to some information, 12 per cent of the 500 thousand small arms and light weapons have made their way illegally into the ownership of various individuals. The other variable has to do with the instability of the Horn of Africa where illicit arms are smuggled in large quantity.

The Eritrean regime’s activities in the region, particularly in arming and smuggling terrorists into the country through Sudan, Djibouti and Afar at various times, has also contributed its own share to the issue.

In general, we have come to learn from various information that illegal arms are used to carry out terror activities and criminal enterprise more than they are used for racking up profit.

There are two differing outlooks when it comes to possession of arms [small arms and light weapons]. Some say that it is legitimate for individuals to possess them for self-protection and other reasons, while other say that ownership should require laws to regulate it. So, what middle ground could be found? And what is being done to put it under a legal framework?

The planned ‘arms trafficking’ proclamation focuses on legalizing/licensing arms in the country to create a situation where illegal arms in the hands of the people are submitted to the concerned authorities. So, it is a law that would help control illegal arms, and license firearms to facilitate responsible gun ownership. It doesn’t generally prohibit gun ownership.

Arms don’t create conflict by themselves of course, but encourages conflicts to be resolved by force rather than through peaceful dialogue. So, we can’t say that the possession of arms is a right. The issue should be handled from the perspective of national security, peace and stability. So, the solution should be teaching and explaining to the people and reduce the propensity of arms possession in the society. Therefore, the main solution for it comes not from the proclamation , but from change in attitude and mentality of the public with regards to the use and handling of firearms. Also, when there is development, conflicts that could potentially erupt in the name of grazing land, water or for other resources will be reduced and becomes less frequent.

As I said earlier, possession of arms is not only about protection, but it is also a cultural thing. It is only through attitudinal change that we can better the situation. These changes can come up with economic and social progress. This is where the majority work should be assigned to.

While this is important, there needs to be a legal framework that would help control the illegal flow of arms in the country. This is not to say that there were none in previous times. Looking at all the illegal firearm law that were in play during the regimes of Emperor Haile-Selassie and the Derg, they were not strong and comprehensive [in content]. They had their own gaps. So, the plan now is to enact a strong legal framework that identities these gaps and accounts for the country’s current level of economic and social development.

So, any citizen that possesses illegal arms without any legal papers will be questioned by this set of laws. And if the arms are owned legally, then he/she will get the legal paperwork for it.

There are also people that say a gun trafficking law to prevent irresponsible transfers of arms have been delayed, especially in light with FDRE Constitution article 51 which stipulates that the government will enact laws on the carrying of arms.

The fact that we are preparing a comprehensive draft law on this issue doesn’t mean that we didn’t have the laws before. But, through process, we have come to learn that they have some gaps. And laws should keep up with the times. Those laws may not incorporate the types of crimes that weren’t issues of concern at the time, like extremism. As the crimes become more sophisticated and complicated, it is important to enact a law that accounts for such dynamism. So, it is not about the case of the laws were not there before. For instance there is a clause about illegal arms on the anti-terror law. The aim is to bring together all the separated laws and the newly added ones into a new comprehensive law.

Coming to the draft proclamation, what are the expected benefits it will bring about in terms of maintaining peace and security?

We expect the proposed law to have many benefits. One, our licensing system will bring uniformity/regularity. So far, it was done in a separated manner for Federal Government and states. So, the fact that the licensing becomes uniform will enable us to identify the illegal ones throughout the country. It helps in maintaining the legal ones while also helping bring the illegal ones into the legal framework. And as it’s a comprehensive framework, it enables the authorities to administer possession of arms all over the country, create accountability for firearm owners and discourage illegal sales.

Notwithstanding a change in attitude and outlook and growth in economic and social development, the draft law will have its own contribution. The draft law accounts for various types of gun owners. And it will be the mission of everybody to implement it. Mind you, even arrested individuals were not persecuted due to the gaps in the law. So, since it is prepared in a way to help vigorously fight the problem and raise the awareness of the public, I believe it will have huge contribution in the fight against illicit arms flow.

Given that the problem is cross-boundary and transcends borders, what kind of cooperation are there between neighbouring countries to address the problem?

The basis of this draft proclamation is the realities and specific contexts of our country. However, Ethiopia cannot fight off this problem by fencing or barricading its borders and controlling everything. There needs to be international cooperation to prevent irresponsible transfer of arms. For example, there is the ‘Nairobi Protocol’ for the Prevention, Control and Reduction of Small Arms and Light Weapons in the Great Lakes Region. And the Ethiopian Parliament has passed it. And it is expected that what we do with regards to the agreement within our borders will also be done by the rest of the signatory countries. So, as long as there is common agreement, it is possible to solve the issue together jointly.

There is also the ‘Convention on the Prohibition of the Use, Stockpiling, Production and Transfer of Anti-Personnel Mines and on their Destruction’ that was signed in 1997, and ratified by the Ethiopian Government. And given that there are activities the neighbouring countries have done and are doing with regard to this agreement, it is believed that this agreement plays its own role as well.

Its reported that illegally owned firearms were used during recently held demonstrations. What’s your take on this?

The recent episode we have seen in the Gondar area is the act of anti-peace elements hiding behind the people. It is an effort on their part to impose their own interests and desire under the disguise of the public’s demand.

We should separate between the two. Those who created the unrest under the guise of the public demand will be brought to court of law. And the issue of illegal gun owners and traffickers will be looked with the law.

Any thing you want to add regarding the draft proclamation?

Like I have said, the new proclamation is prepared in a way that will fill up the gaps seen in previous laws, so we believe it will have a constructive role. The new proclamation is for everyone, and everyone should be owners of it. It shouldn’t be ratified and implemented by one body alone.

And given that every relevant bodies have pitched in their own participation and contribution in it, and since the draft proclamation incorporates the experience of other countries and our own, the realities of our people, the farmers, pastorals, urbanites and every sect of the society, I believe it will help us carry out our duties better.