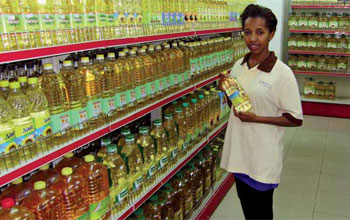 Three million litres of sunflower oil will be imported

The sunflower oil was chosen to diversify the supply of cooking oil in the market by the government following controversies involving palm oil’s harmful effect on the health of individuals, according to Dejenu T. Mariam, deputy manager of the sales division of the Enterprise.

Ethiopia’s government will for the first time import sunflower oil to stabilise the market aside from its usual consignment of palm oil.

The Ethiopian Industrial Inputs Development Enterprise is importing three million litres of refined sunflower oil, which is used as cooking oil. The Enterprise will then distribute the oil to regional and city trade bureaus based on a quota system.

The sunflower oil was chosen to diversify the supply of cooking oil in the market by the government following controversies involving palm oil’s harmful effect on the health of individuals, according to Dejenu T. Mariam, deputy manager of the sales division of the Enterprise.

The sunflower oil, like the government’s supply of palm oil, will be supplied with subsidies. Nonetheless, due to the higher price of sunflower oil in the international market, around 30pc higher than palm oil, it will remain more expensive.

Indonesian company Pacific Interlink will supply the oil after winning a bid. Together with the sunflower oil, it will also supply 30 million litres of palm oil at a total price of 713 million Br.

With 2.2 billion Br allocated to cover three-months of oil demand in the country, 1,455 containers have already reached Djibouti’s port.

The mostly widely used kind of cooking oil in Ethiopia is palm oil, mostly as a result of its affordability. But controversy arose recently regarding the health hazards of the cooking oil, especially following research by the Ethiopian Public Health Institute.

Palm oil has a high level of saturated fatty acid and could lead to cholesterol-related health problems, according to the Institute. Ethiopia imports palm oil that earns the tenth cloud point, meaning a lower quality oil, though it is also imported by 63 other countries.

With each litre of palm oil being subsidised for about 0.37 Br, there were 10 selected private players aside from the Enterprise that import the oil and distribute it across the country. In turn, the government gives duty-free privileges to the importers.

But with the contracts with the private players having recently been terminated after four years in the business, the Ministry of Trade & Industry has temporarily authorized the Enterpirse and Alle Bejimla to import and distribute the oil. The Ministry is also working with regional trade bureaus to select new importers of palm oil.

Ayinadis Tamen (PhD), food science and nutrition lecturer and microbiologist at Addis Abeba University, does not believe sunflower oil will make much of a health difference.

“What matters most is how well the cooking oil is refined much more than what kind it is,” he said. “This kind of misunderstanding should not be allowed to fester within the public.”