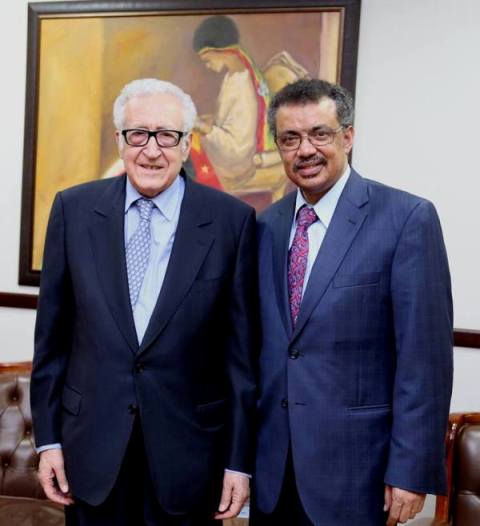 Addis Ababa (HAN) January 9, 2015 – Public Diplomacy and Regional Security news. Global Panel of Experts for the cause of peace and stability in Africa.

The various Security Council resolutions that mandate sanctions, peace operations and Panels of Experts clearly delineate mutually reinforcing objectives, this meeting works from the assumption that increased cooperation between Panels and peace operations in Africa would advance the cause of peace and security in the places (Somalia, South Sudan and Eritrea) where these entities both work.

Foreign Minister Dr Tedros met with Lakhdar Brahimi, former Foreign Minister of Algeria, and member of the African Union Panel of the Wise and The Elders, a group of world leaders working for global peace. Discussions covered issues related to ways on how Ethiopia could contribute to the strengthening of the AU Panel of the Wise in the area of conflict prevention in Africa. During the bilateral talks, Dr Tedros suggested that the Panel of the Wise needed to have a robust engagement with the African Union Peace and Security Council, Member States of the AU and Regional Economic Communities of the continent to enhance Africa’s efforts in the fields of conflict prevention and management as well as the maintenance of peace and security.

The Ethiopian Foreign Minister Dr Tedros noted that Ethiopia was appreciative of your participation and efforts as a member of Panel of the Wise to advance the cause of peace and stability in Africa. Dr Tedros also added that your wealth of rich experience would be an asset for the maintenance of peace security and stability in Africa. Lakhdar Brahimi on his part said that Ethiopia was making headway in defending the peace and stability of the region. He also noted that The Elders group was intending to hold a meeting in Addis Ababa in 2015, adding that the group demanded Ethiopia’s support in making the planned meeting successful.

The former Foreign Affairs Minister of Algeria also went on to note that he would bring 25 students interested in conflict and development to Addis Ababa in February this year with a view to visit the African Union and meet with students of Addis Ababa University (AAU). He also said that the planned visit of his students would help Ethiopia showcase its national development programs.

The Ethiopian Foreign Minister Tedros  on his part promised that the Ministry of Foreign Affairs would make the planned meeting of The Elders group a complete success. With regard to the planned visit of students to the AU and meeting with AAU students, Dr Tedros extended thanks to Lakhdar Brahimi for his decision to bring his students to Ethiopia and the AU and promised that the Ministry in association with other institutions would make the visit a productive and fruitful one.