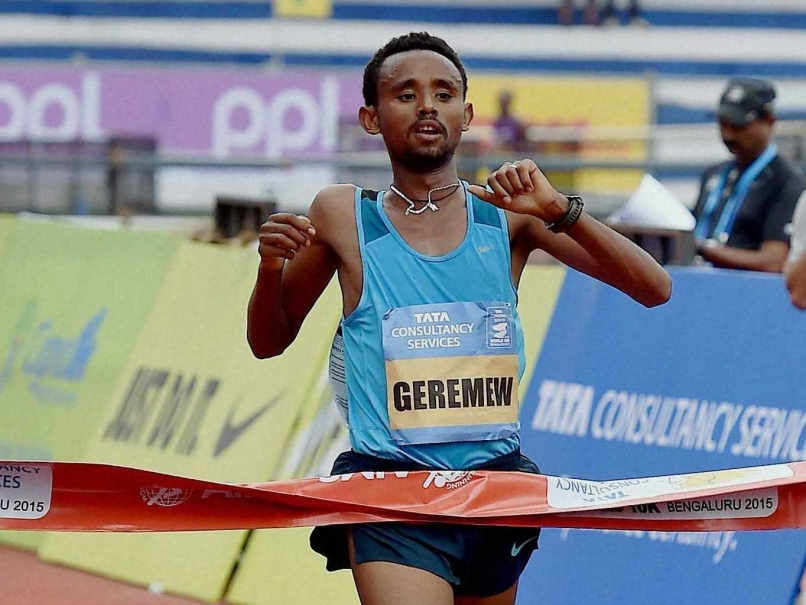 The previous five men’s and three women’s winners had all come from Kenya but there was to be no encore.

Geremew finished in a time of 28:16, with compatriot Fikadu Seboka two seconds behind him. The pair ran a cautious race, not wishing to set the pace at any stage but making sure to stay within striking distance of the leader at all times. Edwin Kiptoo was third.

There was an Ethiopian top two on the women’s side too, where Daska (31:57) was followed by Wude Ayalew, a yawning 13 seconds behind. Gladys Chesir came home in third.

Suresh Kumar, meanwhile, shattered the Indian men’s course record of 29:59, established in the opening edition in 2008 by Kashinath Aswale. Suresh, a third-time-winner here, clocked 29:49 to take home an additional record bonus of Rs. 2 lakh. L. Surya, the 10,000m champion at the Federation Cup, crossed the tape first among the Indian women in a time of 35:58.

Saturday’s relentless downpour brought temperatures down but while domestic athletes called the weather “fantastic”, the East Africans, more comfortable competing in Europe and North America, complained that it was hot and humid.

It perhaps explains why the pace dropped in the men’s race after the 4km mark, when till that point the leader-group had been on course to finish inside 28 minutes.

A bunch of four runners in Kiptoo, Seboka, Geremew and Micah Kogo broke away at the halfway stage. Their progress was careful rather than hasty, with nobody really willing to commit himself.

Kiptoo sought to force the issue but it came to nothing and it was the same group of four that entered the Sree Kanteerava Stadium for the dash to the finish line.

The Ethiopians made their move now and Geremew’s burst on the home straight carried him across the tape.

Kogo, the former world record holder and the pre-race favourite, was unable to find the same finishing kick and settled for fourth.

The women’s race was more straightforward, with Daska leading almost from start-to-finish. Runner-up in the Ras Al Khaima half marathon earlier this year, she was the only woman to go under 32 minutes here.

The winners earned $21,000 each in prize money while the top Indian finishers were awarded Rs. 2.5 lakh each.