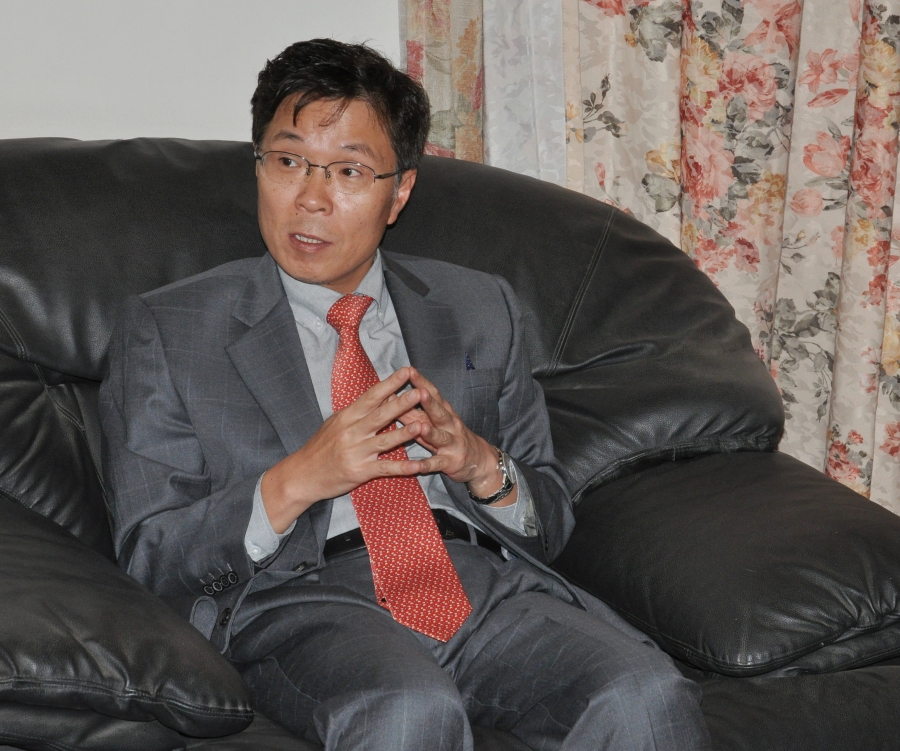 Korea has been a reliable development partners for Ethiopia. Please tell us the area of cooperation between the two countries.

Korea is one of the few countries that achieved both economic development and democratization in modern history. We believe that our achievement can give many developing countries valuable lessons learned as well as inspirations attained. Especially, Korea and Ethiopia are maintaining a brotherly relationship ever since Ethiopia sent its troops to the Korean War. In particular, the late Prime Minister of Ethiopia, H.E. Meles, regarded Korea’s developmental policy and experience as a key model for Ethiopia’s national development. From our side, the Korean people and the government are trying our best to provide meaningful contribution to the developing process of this great country through multiple channels.

First of all, Korea has been providing Overseas Development Assistance (ODA) through KOICA (Korea International Cooperation Agency) in various sectors with an emphasis to education, health, and agriculture. Ethiopia has been one of the core countries of our ODA destination. In 2014 alone, 17 million USD has been funded for various projects in Ethiopia.

Furthermore, through the KSP (Knowledge Sharing Programme), we are providing consultancy in formulating and implementing economic policies on the basis of our economic development experience.

The Korea EXIM Bank also opened its office this year. Therefore more vibrant credit assistance is expected to be materialized in the future.

Lastly, we are assisting the rural communities through Saemaul Undong (New Village Movement) projects in various parts of the country to infuse confidence in the people that they can achieve rural and economic development. I believe this project has a special importance to Ethiopia, given that the majority of its people still live in rural area.

You have recently visited the Grand Ethiopian Renaissance Dam project. What was your impression towards the project and the overall socio-economic development taking place in Ethiopia?

Indeed, power generation is one of the most important infrastructures of a country. First, I was overwhelmed by the sheer size of the project. In particular, I was deeply moved by the Ethiopian people who are raising their own fund for the project. It truly shows Ethiopia’s power and people’s ardent aspiration for development. As far as I know, the dam has already begun generating electricity, and I believe that once it is completed, it will become a monumental architecture symbolizing the Ethiopian unity. I would like to add my expectation that Ethiopia will work to bring out a smooth resolution with the neighbouring countries, such as Egypt and Sudan, on issues of environmental assessment and the like, considering the Nile River is an important international river.

Ethiopia has been realizing a high economic growth rate of around 10 per cent for the last decade. This is a truly remarkable achievement amid volatile and unpredictable international economic situation. At this rate, UNECA projects that Ethiopia will become the largest economy in Africa by the year 2050. On the other hand, I must admit that Ethiopia is facing many challenges as a large and diverse emerging economy. I think the most important challenge is to eradicate absolute poverty still remaining in some parts and create jobs through industrialization. In order to achieve this, I believe that increasing educational opportunities and improving the health environment should be sought after more than anything else. Moreover, more attention should be given to improve agricultural productivity and to promote tourism.

What are the areas of investment Korean companies would prefer to participate in Ethiopia?

It is true that investment by Korean entrepreneurs has been limited so far. Our investment areas were largely focused on labour intensive industries, such as textiles and wigs. However, I believe that the economies of both countries are highly complementary, taking into consideration of the capital and technology of Korea and the abundant and competitive labour of Ethiopia. Besides textile and steel industry, in which investments are under progress, I expect that some of the promising areas for future Korean investment are pharmaceuticals, leather, electronics, and assembly of automotive vehicle parts.

I also view that the Korean investment inflows are important not only in job creation, but also in technology transfer and management skill. As an Ambassador to Ethiopia, I will exert every possible effort to attract more investment from Korean companies.

Ethiopia has launched the second Growth and Transformation Plan (GTP II) and much focus has been given to industrialization. Are Korean investors interested to participate in this sector?

As far as I know, GTP I achieved a significant performance and its second phase has just been kicked off. The second phase focuses, as you have rightly mentioned, on industrialization. In my opinion, a long-term industrialization policy led by the efficient government and supported by its people, such has been the case with GTP, is the most important path to achieve sustainable economic development for a developing country. And I think that Korea’s past economic development experience can shed important implications and lessons on Ethiopia.

I also think that through industrialization Ethiopia will attain job creation and international competitiveness. Furthermore, the country will be able to reduce the large trade deficit that it is currently confronting with.

As a matter of fact, in the beginning of May, Dr. Arkebe, Chief Economic Advisor of the Ethiopian Prime Minister’s Office, visited Korea with a large delegation and had a useful discussion with our high-level officials on investment promotion measures. I myself read with great interest his book “Made in Africa” and have once attended a related seminar. It is an immense blessing for Ethiopia to have such a great economist with vision and determination.

What is Korean overall involvement in the African continent and works with the African Union in peace building and development?

Honestly, for no other special reason than geographic distance between the two continents, our interest so far in Africa was relatively low. Korea has now grown into a global top 10 economic power. Korea’s contribution and interest toward the international community, especially in Africa, are growing.

We are expanding our ODA in Africa continuously with the belief that Africa is the future of the world. We will also increase our contribution to Africa’s peace and security.

In this context, Korean government has deployed, since 2013, an engineering unit to UNMISS (United Nations Mission in South Sudan) and is now considering providing a medical facility to assist peacekeeping efforts in Africa.

Acknowledging the importance of the AU, we are enhancing cooperation with the AU in a wide-ranging field. In particular, we are planning to co-host the 4th Korea-Africa Forum in December 2016 in Addis Ababa with Ethiopian government. This Forum is the first Korea-Africa Forum to be held in Africa and will be an epoch-making advancement in the Korea-AU relationship.

The Korean President H.E. Park Geun-hye is going to visit Ethiopia. Tell us the purpose of her visit and the delegation coming with Her Excellency.

President Park Geun-hye will make a State Visit to Ethiopia during 25 and 28 May. This is the first visit to Africa during Her Excellency’s Presidency. Considering that Ethiopia is the first leg of the visit, I believe, it clearly shows Korean government’s exceptional interest and emphasis on Ethiopia.

We are expecting that the bilateral relationship will elevate to a new level in every aspect, such as politics, economy, culture, and etc. President Park decided to make a State Visit to Ethiopia, which is the second most populous country in Africa and a leader in the East African region, with the belief and the conviction that our cooperation with this country is very crucial, not only bilaterally but also multilaterally. During her visit, President Park will announce Korea’s policy towards Ethiopia and Africa through the bilateral summit and her special speech at the AU headquarters. H.E. Byung-se Yoon, Minister of Foreign Affairs as well as other high-level officials and prominent figures will visit Ethiopia as a part of the delegation.

During Her Excellency’s visit, we will launch a development project called “Korea Aid”. It is my Government’s new paradigm of development cooperation. It is new in the sense it is a mobile project. Korea Aid is comprised of three mobile elements, namely K-Medic, K-Culture and K-Meal with 10 vehicles to reach out to the community, serving people in the sectors of health (especially for girls), nutrition and education, and sharing Korean culture as well. The launching ceremony will be held in Addis Ababa University on 28th May and President Park will be there. After the ceremony, a caravan of Korea Aid will carry out a pilot mission in Adama Science and Technology University for two days, and eventually it will be stationed Jimma University to serve Jimma Zone and around. I sincerely hope that through this Korea Aid project, we will be able to achieve the SDGs of “leave no one behind” and share Korean economic and social development experience.

Previously, President Lee Myung Bak visited Ethiopia. What are the progresses since then?

Former President Lee’s visit to Ethiopia was indeed a historic one as it was the first visit ever by the Head of State of Korea. After the visit, Korean people’s understanding on Ethiopia has been deepened. Moreover, our ODA and investment have begun to increase substantially.

Korean people remember and cherish Ethiopia’s participation in the Korean War. Over 6,000 brave soldiers of the Kagnew Battalion participated in the Korean War with the sole purpose of protecting freedom. Some 122 precious lives had been sacrificed. Both the Korean government and the private sector are implementing various projects as a way of expressing our gratitude. Some of them include: visit to Korea programme for Korean War veterans, provision of education opportunity and scholarship, and provision of medical services to veterans and their families. Our assistance will continue in the future.

Lastly, taking this opportunity, I would like to express my deepest gratitude for the Ethiopian people’s genuine interest and love for Korea, and I am confident that we will be able to witness through this occasion the deepest and eternal friendship between two great countries and between two mutually-respecting peoples.