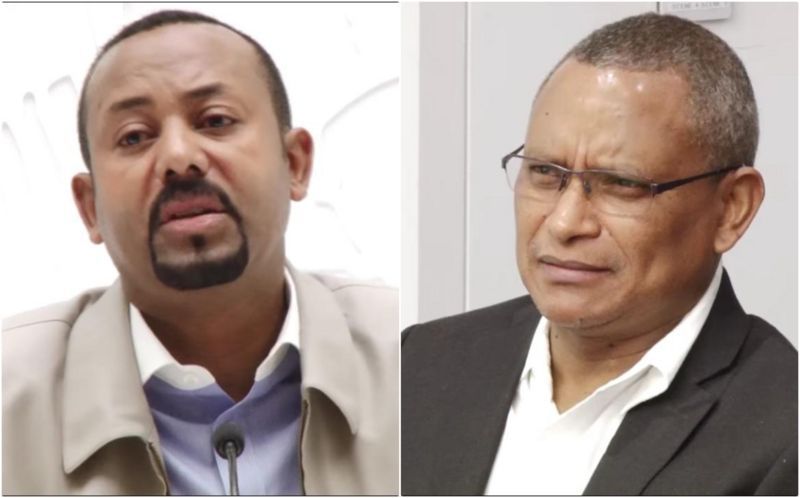 The dispute between the federal government and the Tigray Regional Government seems to have reached a tipping point. The small bubbles that have been building up for more than two years since the last General Assembly of the defunct four-party coalition of the Ethiopian Peoples’ Revolutionary Democratic Front (EPRDF) in Hawassa, look to have gathered mass and the resulting tornado approaching the shores. The war of words between the ruling party up North and the federal government in Addis Ababa has evolved into “troubling and disturbing” actions.

New decisions by the House of the Federation (HoF) and frequent interviews the Speaker of the HoF, Ahmed Farah, gave to state media indicated that the federal government is running out of patience and steam to stand delegitimization campaign hurled from Tigray. On the other hand, Tigray People’s Liberation (TPLF) officials in Mekele do not show any hint of backing down on their stance to delegitimize the federal government which have gain new lease on its tenure after extending the national elections originally due in late August 2020 due to CoVID-19 pandemic.

Although the genesis of all of this has its roots in July 2018’s Hawassa General Assembly of the EPRDF that decided to reorient the party, forge it into one and frame a new ideological line by ditching the long entrenched revolutionary democracy ideology. The turning point for the feud between PM Abiy Ahmed (PhD) and Debretsion Gebremichael’s (PhD) in Addis and Mekele, respectively and their backers is undoubtedly the postponement of the general elections. The two federal houses, the HoF and the House of Peoples’ Representatives (HoPR) decided to indefinitely extend the elections because of the corona virus that was discovered in the country six months ago. Debretsion’s administration in Tigray denounced this action and deemed it unconstitutional followed by a preparation to hold regional level elections which the TPLF won all but one seat in the regional council.

October 5, 2020 was a deadline placed by Tigray to start calling PM Abiy the former PM, a time when new government wound have been established had elections been held according to the constitutional provision under article 58. This was also the date when the first session of the fifth term HoPR’s unaccustomed sixth year service opened with a speech by President Sahile-Work Zewudie.

Explaining to The Reporter that this is meant to recognize the lower echelons of the regional government as they are still in office for an election held years back, the Communications Head of the HoF Kassahun Bekele says these entities are legal unlike the newly instituted regional government.

“The districts and the city administrations did not hold new elections so they are legal. The decision wants to maintain relationship with these bodies of the region,” he said.

Whatever details that could come out of the Council of Ministers, aka the Cabinet, would look like, this decision has triggered discussions as well as fear among many that it would escalate and deteriorate the already tense political landscape in the country.

Tigray region’s ruling party executive committee member Getachew Reda told The Reporter that this is an act of war and they would take the proper measures to tackle attacks towards the interests of the region.

“This is an attack to the legitimate shares of the region and whatever comes against this interest is an act of declaring war on us. We take this decision as a declaration of war by a bandit in Addis Ababa,” Getachew Reda said.

Any kind of decision that an illegal house made is an illegal decision, according to him and the regional government will look into ways of duly responding to it.

For Merera Gudina (PhD. Prof.), a prominent Political Science Scholar, and opposition figure serving as a chair of Oromo Federalist Congress in Ethiopia, the decision made by the HoF has further complicated the situation and it is becoming increasingly difficult to predict what would come next.

“There can’t be two governments in a country. The regional government in Tigray saying it won’t recognize the federal government presents more crisis. And this makes it hard to prescribe any sort of easy resolution,” he told The Reporter.

The fact that this is unusual happening in the country’s politics, it would fuel the political crises being witnessed, he adds, and “we are not sure what card the two intend to play at the last.”

Getachew Assefa (PhD), a prominent constitutional lawyer and professor of law at Addis Ababa University, on his part, indicates that the core event in this seemingly deadlock situation is the decision by the Tigray region to proceed with holding regional election despite the adoption into law of its postponement by the HoPR. The region proceeded with the election although the federal government said it should not happen.

After the federal government nullified the election results as well as the newly instituted regional government, TPLF pulled out its members holding executive positions at the federal level. Getachew also asks what legal ground is to be considered when the region and the party do something like this.

But, he indicates such tensions and strong differences between the federal and regional level governments is expected especially given the two levels are ruled by contending parties.

“It is obvious that there will be strong differences in some issues between the regional and the federal governments. But, the point is how they could resolve conflicts as long as they hold offices,” he explains. “This is more common when contending parties lead at the federal and regional levels.”

One of the constitutional provisions to resolve such a conflict is through the grievances procedure where regional governments that feel uncomfortable with a decision by the federal government file formal complaint to the House of the Federation, he indicates.

For him, even if a decision made by the federal government is unfavorable, one has to accept it and follow the formal means of fighting against it.

“The decision by the House of the Federation seems to have been made in lack of other alternatives. If a regional state defies a decision by the federal government, there are measures to be taken according to the constitution,” he adds.

But, the practicality and aptness of the recent decision by the HoF is a debatable issue, he says. Although the Council of Ministers is mandated to prepare the details regarding the severance of federal relations with the regional government in Tigray, Getachew Assefa sees two main challenges for the implementation of the decision.

Unless they come up with a miraculous means of establishing relations with the lower tiers of the regional government, this would face a huge challenge of implementation as the party structure and membership is extended to these levels of the administration. So, it will be difficult to assume that they would positively engage with the federal government in disobedience of the party bylaws that ensure centrality in the party functions.

What both Merera and Getachew Assefa (PhD) agree on is the potential of military conformation between the federal and the Tigray regional government. Merera believes that although the two levels of administration say they won’t enter into military confrontation, it is impossible to say so at this point.

“We cannot say they won’t fight because there could be two governments in one country. The fact that Tigray did not recognize the federal government makes it a federal challenger. Unless they try to tolerate each other and play the game fairly, they could fight on a thousand and one reasons,” Merera reflects.

Merera says that the two will not be able to coexist in this situation until one of them submits to the demands of the other. The consequence of such confrontation is hard to predict but it is devastating, he indicates. For him, as he has been saying it since long, what could simmer down the current wave of political instability in the country as well as the confrontation between Tigray and the federal government is an inclusive national dialogue.

Similarly, although the Prime Minister and the Speaker of the HoF are saying that there is no interest to fight Tigray regional government, Getachew Asseffa says it is not something to rule out. According to him, there are visible transgressions of the constitution like defying federal decisions and aggressive measures like pulling out of TPLF member federal officials and this could lead to the federal intervention.

“The tolerance from the federal government would change at some point. But, some measures should identify between the party and the government as indicated in the constitution, electoral and political parties’ proclamation, Hence, there could also be criminal accountability according to provisions in the Criminal Code,” he points out.

So, resorting to measures like criminal charges against transgressors of the constitution could be used to maintain the constitutional order, he says. But “illegal actions by the TPLF” could worsen the situation and this should be carefully considered, he concldes.