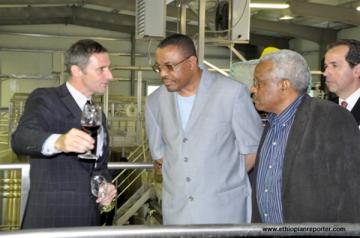 Addis Ababa (HAN) July 20, 2014 – Market and commodities news. After a strategic  deal was struck between the late Meles Zenawi and Pierre Castel, founder and President of the Castel Group and BGI International to establish Castel Winery in Ethiopia that faithful day in 2007, the company immediately assigned the best experts and consultants in the business from France to select the most suitable area for a vineyard which can meet Castel Family’s strict three generations old quality wine making standards and criteria. After a thorough investigation by the panel of experts, the town of Battu (Zeway), 163 kilometers south of Addis Ababa was selected.

Updated news By Jenny Vaughan (AFP). Beyond the donkeys on a potholed road in southern Ethiopia is an unexpected sight—vineyards bursting with merlot, syrah and chardonnay grapes ripening in the African sun.

The scene is more reminiscent of France’s Beaujolais region than this corner of the Horn of the Africa, which for many still conjures images of famine, poverty and war.

“People outside Ethiopia may know of the drought 10 years ago,” Industry Minister Ahmed Abtew told AFP. “But when they see wine with ‘Made in Ethiopia’ on it, their mind automatically changes.”

The French beverage giant Castel, which bottled its first batch of Ethiopian wine this year, is helping change the way outsiders view the country. It is also boosting government hopes of attracting foreign investment, key to its plans to reach middle income status by 2025.The country’s growth rates are already among the highest in Africa, hitting 11.2 percent last year according to the government, although the International Monetary Fund puts the figure at 8.2 percent.For Castel, the ambition is merely to produce good wine, and Ethiopia is an ideal—if surprising—place to do that.

“We don’t find it difficult because the climate is good, it’s not too hot,” said Castel’s Ethiopia site manager Olivier Spillebout, at its vineyards in Ziway, 160 kilometers (100 miles) south of the capital Addis Ababa.

The sandy soil, short rainy season, cheap land and abundant labour were what drew the company’s billionaire president Pierre Castel. The company has been working in Africa for half a century, and in Ethiopia since 1998 when it purchased a state-owned brewery, St George.But the late prime minister Meles Zenawi thought a vineyard would boost Ethiopia’s image abroad, and asked Castel if it would be interested. So in 2008 the firm spent $27 million (€20 million) setting up Ethiopia’s first foreign-owned vineyard.Surprise hit in ChinaCastel aims to sell half of this year’s production of 1.2 million bottles on the domestic market, and half to Ethiopian diaspora communities in North America, Europe and elsewhere in eastern Africa.But Spillebout has been startled by some surprise customers, including a Chinese buyer who snapped up 24,000 bottles.“It’s a big surprise,” he said, standing amid rows of merlot vines.China, however, is home to the largest number of wine drinkers in the world, and in recent years Chinese investors have bought scores of French vineyards as they have become significant players in the wine world.In Ethiopia, a bottle of Castel wine sells for 10 dollars (€7), and is of better quality than comparably priced imported wines from South Africa or Italy.The bottle’s design echoes Ethiopian traditions, showing the bulbous carafe traditionally used to serve the still popular, and potent, honey wine.Even so Spillebout claims his wines are popular with drinkers of sweet and syrupy traditional wines, which are often served with raw meat, a local delicacy.Goes well with raw meatEthiopia is hoping to emulate the growth of Asian nations that have focused on manufacturing to develop rapidly.“Our vision is that Ethiopia will be a hub for labor-intensive, light industries in Africa,” Abtew said.But exports have declined from $3.08 billion (€2.3 billion) in 2013 to $2.6 billion (€1.9 billion) in the past year, according to the trade ministry.Despite its eagerness to attract foreign investment, the country is still losing out to more established African markets like Kenya and Nigeria.The World Bank ranks Ethiopia 125th out of 189 on its Ease of Doing Business index, with bureaucracy, access to key infrastructure and investment protection rated poorly.For now, the country is considered a long-term investment destination. Although cheap labour drawn from its population of 91 million, ready access to publicly owned lands and tax breaks make it attractive, investors should not expect a quick return.Castel, for example, said it does not expect to earn profits from its Ethiopia vineyard until 2016, eight years after it set it up.France’s ambassador to Ethiopia, Brigitte Collet, said “pioneers” like Castel could attract other investors.“This important investment is also a very strong statement of confidence in the future of Ethiopia,” she said.French companies have earned contracts worth €3.0 billion ($4.0 billion) in the last five years with 50 companies operating in the country today, up from 15 only a decade ago.Castel’s main concern is keeping up with demand, having sold nearly a quarter of its first batch of wine since April, and said it plans to expand the vineyard to eventually boost production to three million bottles a year.Though sales are modest today, Spillebout is not ruling out Ethiopia’s potential to become a premier wine-producer and exporter in Africa.“Exports are small now, but year after year the sales will grow very quickly,” he said. sources AFP : Ethiopian wine raises cheer for economy