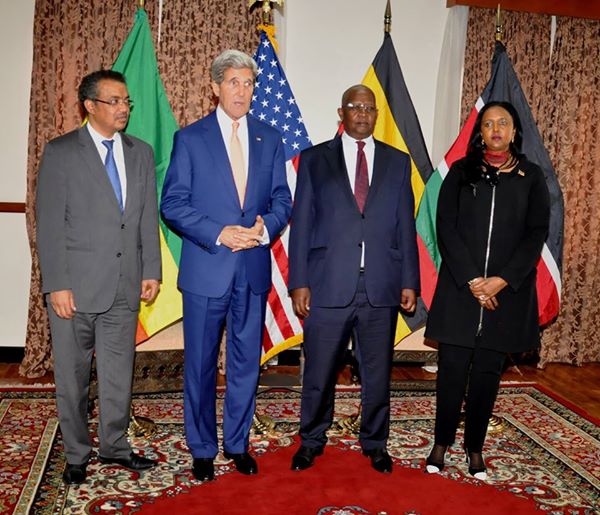 Addis Ababa (HAN) May 3, 2014 – According to HAN & Geeska Afrika Online reporter in Addis Ababa reported that, The Foreign Ministers of Ethiopia, Kenya and Uganda met with Secretary of State John Kerry.

Dr.Tedros Adhanom and Foreign Ministers of Kenya and Uganda, Ambassador Amina Mohamed and Sam Kutesa met with US Secretary of State John Kerry and Assistant Secretary for African Affairs Linda Thomas-Greenfield, Special Envoy for the Great Lakes and the Democratic Republic of the Congo Russell Feingold, Special Envoy to Sudan and South Sudan Donald Booth, and Ambassador-at-Large for Global Women’s Issue Catherine Russell here in Addis Ababa. The discussion of the two sides focused on the ongoing crisis in South Sudan and on ways to stop the violence claiming lives of innocent civilians. The Ethiopiam FM  Dr Tedros on the occasion appreciated the continued support of the Secretary of State John Kerry and through him the US Government for continued support to the regional peace effort to resolve the crisis in South Sudan as well as Spmalia. Secretary of State John Kerry for his part hailed the leadership of the IGAD region for the efforts and commitment they have shown in the search for peace in South Sudan as well as to stop Al-Shabaab militants to secure regional critical assets.

The two diplomatic sides (IGAD foreign Minister and Secretary of State John Kerry) underlined the importance of translating the decision made within the auspices of IGAD in to action to stop the worsening humanitarian catastrophe and restore order in South Sudan. In that regard, the two sides deliberated on ways to expedite the deployment of the Prevention and Deterrent Force (PDF) with a special mandate of peace making. Secretary Kerry stated that US is committed to support the deployment of the PDF. The two sides also agreed on the importance of dialogue with a view to start inclusive political process in South Sudan, improving humanitarian situation and protection of civilians. Secretary of State John Kerry is scheduled to meet Prime Minister Hailemariam Desalegn.
The latest updates Follow twitter.com/GeskaAfrika
Geeska Afrika Online (1985 -2014) – The International Gateway news and views about the Horn of Africa (Ethiopia, Eritrea, Somalia, Somaliland, Sudan, South Sudan, Djibouti, Kenya and Uganda), the best IGAD news and information Online Site for the last 20 Years.