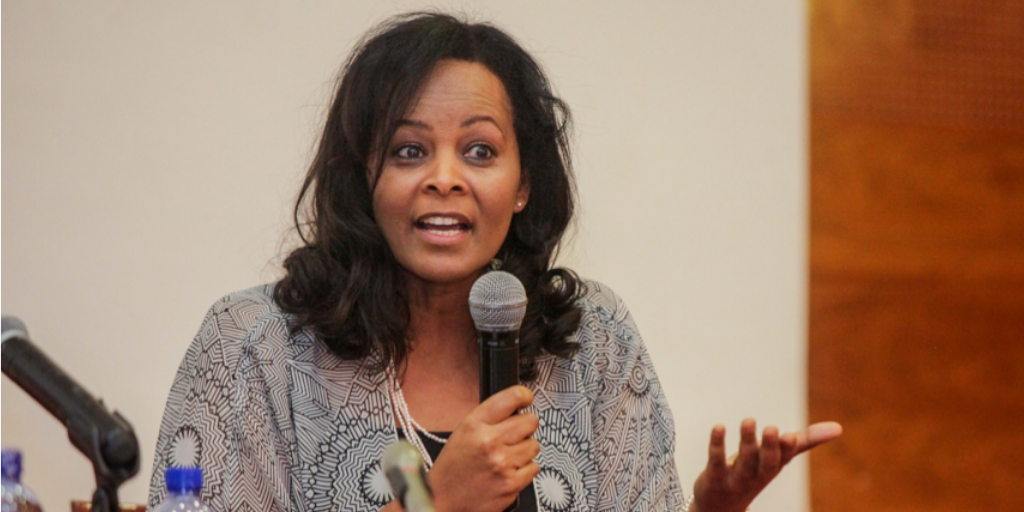 Addis Abeba(HAN) November 19, 2019. Regional Security and Stability NEWS. –BY: Etenesh Abera With 38% of children under 5 years of age malnourished, Ethiopia is still ranked among the highest in chronic under-nutrition according to a research. Another research says that in 2009 alone Ethiopia lost 55.5 billion ETB as a result of child under-nutrition – equivalent to 16.5% of the country’s GDP. “Wherever children are, let there be food” is the motto behind the Ethiopian School Meal Initiative (ESMI) founded by Frealem Shibabaw. The initiative is the backbone when it comes to lobbying about a policy towards nutrition.

In an exclusive interview with Addis Standard, Frealem Shibabaw, the Director of EMSI, talked about the long and arduous journey she took to get the importance of school feeding programs recognized nationally.

She remembers the day when the idea of starting to work toward having school feeding program recognized struck her. It was while driving back home from work when a child, “maybe five years old stopped me and said ”I have never been in school; my mom can’t cover the school fee. So I want to study in your school,” she said. By that the child was referring to a private school called Bahirdar Academy she had in Bahir Dar, the capital of Amhara regional state. The school had already a scholarship program for some students. “It was a pleasure to have such a student who would take the extra step for his education,” Frealem said if her decision to give him scholarship to study at her school.

Years passed and she started getting reports that the child’s grades were going down and that during lunch time he would go out to play instead of joining his classmates to eat from their lunch boxes. When his teachers asked him why he wasn’t eating, he would answer that he had already eaten. His teacher checked his lunch box one day and found it empty. “I was shocked when I heard this,” Frealem said. “We arranged for him to get food, but that experience helped us to go out to see how students were faring in public schools nearby. We found that the problem was huge. There were lots of students who come to school with empty lunch boxes.I realized this was a huge social problem, but one that is ignored the nation over.”

After that Frealem decided to put all her efforts together to establish a national organization dedicated to tackle this national problem. But soon challenges ensued; having one of the most restrictive Civil Society laws in the country means registering non-governmental organization entailed a lot of hassle: “it was one of the most difficult things to accomplish.”

Undeterred by the challenges, Frealem managed to get the Ethiopian School Meal Initiative (ESMI) registered and up and running in 2014. Managing ESMI means Frealem had to observe and learn from schools all over the country. As aptly put it: “I learned the food shortage was different from places to places but the depth of the problem was quite similar.”

Frealem moved to try and answer questions like what kind of food ESMI was going to get involved in preparing, what to do if the children dislike the food and how much money will it need. And then she thought of the one dish her kids never get tired of: milk and bread. As luck would have it, by then she had met a lady called Genet who came from Sebeta area in the outskirts of Addis Abeba, and asked her for help. Genet was already feeding up to 60 children on her own but had ran out of money to sustain her small initiative even having sold all her jewellery to pay for the children’s meals. She asked Frealem to sponsor and buy milk for the children, but Frealem had an even better idea. She took Genet’s small private initiative and incorporated it into her own project, which was performing better. She then bought Genet ten cows and gave her as a gift so she can continue supporting the children she was already supporting when she met Frealem. “Genet cried when she received the cows in the school yard,” she says.

The idea of cows for schools was very successful from many different angles says, Frealem adding that in addition to providing students with fresh milk every day, the milk is also sold to nearby communities when school is out, earning the schools money to cover other expenses. The project also created job opportunities for the mothers of the children being supported. After looking at this model, Frealem said they piloted the project in five regional states by giving ten cows each to selected schools across the country.

Soon after Frealem got a call from Waghemrah, an area in Amhara regional state which is frequented by famine. “I was quite pleased in visiting the area; I immediately promised to start the project in two schools there,” she reckons. But on her way back to Bahir Dar from Waghemira, Frealem witnessed the exact place where the international media reported the news of the horrific famine in 1984, Seqota. “I couldn’t stop crying.” The next morning Frealem went to the Orthodox Christian Children’s Center and asked about the children that came from Seqota, a small town in Waghemira, at the time of that devastating famine. The center told her most of them had moved to Addis Abeba and some of them were abroad. But her search helped her meet one of them, a man who became a businessman and who now owned a hotel in Bahir Dar. He gave her a contact of another member of these former students at the center.

Her frequent contacts with these former members of the center gave birth to another, much bigger initiative: Frealem began drafting the first thoughts of what would soon become the Seqota Declaration. In finishing it, Frealem gave it to the government. The declaration, which was to be signed by stakeholders and regional governments in Seqota, states that in ten years time Ethiopia will end famine and children undernutrition. In August 2015, at the Third Financing for Development Conference held in Addis Abeba, Ethiopia had officially unveiled the Seqota Declaration.

Seqota Declaration is the Ethiopian Government’s commitment unveiled in July 2015 to end stunting in children under two years by 2030 (G.C). Seqota Declaration, that builds and support the National Nutrition Program, has a 15 years Implementation Plan (road map) that provides strategic guidance to be executed in three phases namely innovation, expansion and scale up phases.

The pilot projects proved the school meal projects were very successful says Frealem, adding dropout rates in all the schools where the project was being implemented went down and those who were not in school were very eager to get enrolled in school. This led her to lobby the government to start school meal programs all over the country in public primary schools; she began soliciting help from public figures. That’s when the former First Lady, Roman Tesfaye, came into the picture. Roman became one of the few first responders to spread similar project like that of Frealem’s. “Roman started her own school feeding project called “Yenat Weg” after visiting our project in Bahir Dar,” Frealem says.

Five years down the line, the work they have been putting together received national recognition when the government announced the new education policy in 2019 which includes providing school meals in primary schools all over the country.

When the Addis Abeba City Administration school meal project started, Frealem says her initiative convinced the city administration to give the work of preparing the food to the mothers of the children attending the schools. This was because they will ensure the quality while also generating income for themselves she says highlighting how this project is empowering women.

It is, however, not without its own challenges, the biggest of all being lack of understanding and easy streamlining of available resources. The government has already set up the policy, she says, but “we should also work to make its goals a reality.” The other challenge she points out is the negligence in thinking “we can achieve our developmental goals while we have starving children, we can not.”

Today, the Seqota Declaration is under The Ministry of Health while the Ethiopian School Meal Project is under the Ministry of Education. Frealem says this should change and instead proposes a Nutrition Ministry led by nutritionists. “We want the government to allocate budget for child nutrition the way it allocates budget for education and other issues.”

Frealem says she is especially grateful to the deputy mayor of Addis Abeba, Takele Uma, with whom they are working to create a system which will help to strengthen and ensure the sustainability of the program. She says that there is a group led by EMSI which includes professionals such as nutritionists, farmers and agriculture experts, among others, to create a supply chain system. “I strongly elieve that the supply chain system for this project will not only sustain school feeding programs but also strengthen the local economy in different ways.”