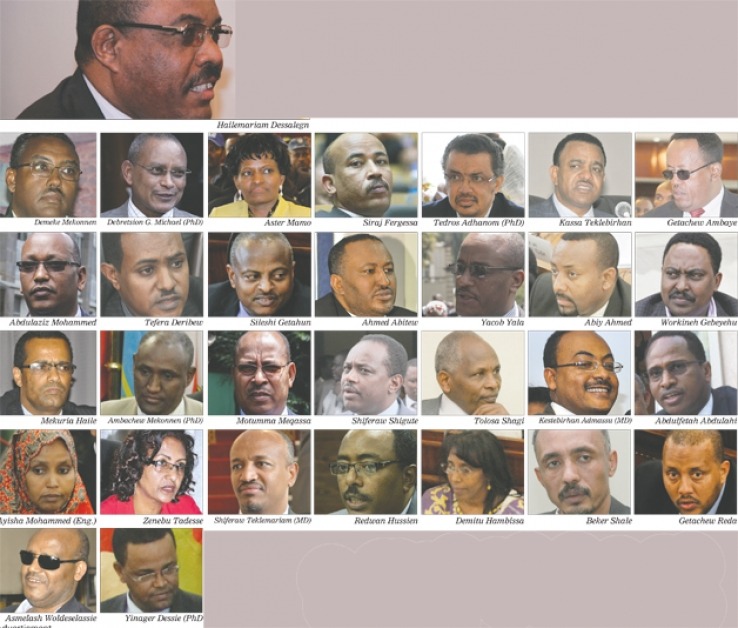 Addis Ababa (HAN) October 10, 2015 – Public Diplomacy and Regional Humanitarian initiatives News. By Yonas Abiye Despite the ill-fate of multi-party system, which many argue to be hanging by a thread or considered by some to be already is dead, Prime Minister Hailemariam Dessalegn had the parliament endorse his new members of cabinet to serve for the next five years.

Contrary to speculations and rumors, Hailemariam’s nomination of his cabinet members came with some unexpected news arrangements and this is better reflected in the proposed institutional reorganization and restructuring, writes Yonas Abiye.

In a widely anticipated development, Hailemariam Dessalegn, has been unanimously re-elected as the country’s Prime Minister at the inaugural session of the newly-elected parliament where the ruling coalition holds all seats together with its affiliates.

Deputy Prime Minister, Demeke Mekonnen, presented Hailemariam as the only nominee for the Prime Minister post from the victorious Ethiopian Peoples’ Revolutionary Democratic Front (EPRDF), which was followed by his election by acclamation.

The swearing-in of the PM marked his first full term at the helm of the nation’s most important job. However, what was equally expected from the formation of the new government was a deep restructuring and reshuffling of the PM’s new cabinet. But, changes were mild at best.

The cabinet was graced by some new faces, but to most part what the PM focused on was restructuring offices under the executive branch of government.

On Tuesday, before presenting his nominees for the new cabinet, Hailemariam explained in detail what the rationale were behind the restructuring process and what it aimed to achieve. The cabinet that is formally called the Council of Ministers will be comprised of 25 ministers and four other senior officials with ministerial portfolios, which includes the Head of Government Communication Affairs Office, Director General of Ethiopian Revenues and Customs Authority (ERCA), National Planning Commission Commissioner as well as Government Whip, for the coming five years. The PM, of course, will be chairing this council.

Hailemariam indeed brought some new faces to his administration, but the most significant changes occurred in the institutional setup. The restructuring saw new ministerial offices surfacing and some assuming different shapes and responsibilities. Apart from the new faces, the restructuring also saw reshuffle among the high-ranking officials. In fact, some have to bow out gracefully to what appears to be their retirement jobs.

Perhaps the most rumored among the ministerial reshuffle was the question of who will replace the veteran finance minster, Sufian Ahmed. In fact, Sufian was rumored to be on his way to his long sought retirement when he stood for the election of African Development Bank (AfDB) presidency, a race he lost to the Nigerian Agriculture Minister.

The former vice president of the Oromia Regional State, Abdulaziz Mohammed, was not in many peoples’ mind to fill Sufian’s shoes in leading the one of the most important ministerial offices in country. It is not only the top man who was changed; the institution itself was baptized with a new name–Ministry of Finance and Economic Cooperation (MoFEC)—losing the development aspect to the newly emerging ministries.

According to the new organizational structure, MoFEC, apart from the power and duty it had earlier while it was MoFED, is granted more power to initiate economic cooperation and fiscal policies. Nevertheless, some of the old duties and responsibilities were also handed over to other institutions such as the National Planning Commission.

With the same basic rationale, he indicated that the restructuring of the executive body is believed to help the implementation of the upcoming GTP after taking the hard lesson from the failures of the concluded GTP I plan. According to Hailemariam, the restructuring is also after another important ingredient in the success of the plan; which is coordination. He specifically mentioned the need for linkage and coordination between the federal and regional institutions. Strong institutional arrangement is what is required so as to effectively enforce government policies and development plans, he argued. “Particularly to meet our plan of achieving a middle income status by 2025,” Hailemariam told MPs.

In fact, Hailemariam’s position on the need to have strong institutional culture and arrangement is reflected all through last year, where the evaluation of the GTP I plan was conducted and draft of the GTP is presented to public debate.

Going into the details, Hilemariam noted how some of the ministerial offices and agencies were overburdened with very broad duties and responsibilities. In this regard, Hailemariam cited the Ministry of Agriculture (MoA) as one such institution, which was decided to split into two separate ministries—Ministry of Agriculture and Natural Resources and Ministry of Livestock and Fisheries—looking to tap into the prospect of growing fish resources in connection with water reservoirs and dams. In addition to that, the new categorization zoomed-in on the livestock sector as it is a determining factor for not only the meat and meat products, and diary processing industry but it is also quite decisive for the promising leather and leather products sector, from which the government expects half a billion dollars in the last GTP but failed to attain the target.

Hence, out of the 21 ministries in the past term, 12 of them are restructured; either split into two or saw addition or subtraction of their duties and responsibilities. As a result, four new ministries emerged in cabinet portfolios.

“Some of the ministry offices shouldered very broader responsibility and duties. With the current local and global contexts, it is difficult for them to implement their responsibility. So, with a strong research that we carried out and later approved by the Council of Ministers, we have found it necessary that some of them split into two to effectively carry out their duties,” PM Hailemariam told the new parliament.

The reshuffle also saw three young politicians climbing to the ministerial position: Abiy Ahmed, Minister of Science and Technology, Ayisha Mohammed Musa (Eng.), Minister of Culture and Tourism, and Getachew Reda, Head of the Government Communication Affairs Office. Ministry of Construction is another new ministerial office which will be headed by Ambachew Mekonnen (PhD), former head of Trade and Industry Bureau in the Amhara Regional State. It is surgically detached from the former Ministry of Urban Development, Housing and Construction, head by Mekuria Haile.

Meanwhile, Ministry of Women, Children and Youth Affairs, formerly under, Zenebu Tadesse, lost the youth component and gave rise to a new Ministry of Youth and Sports. However, this office grabbed the attention of many as Redwan Hussien, former Head of Government Communication Affairs Offices, is assigned to run it. “We need strong leadership to guide the Ministry of Youth and Sports as 70 percent of our population is young and children; and that it is very sensitive aspect for the policymaker,” Hailemariam explains.  Hailemariam’s unusual explanation of the reshuffle of Redwan from spokesperson to the new portfolio seems to be directed towards any negative perception of the assignment if there is any.

Ministry of Civil Service which has been run by Aster Mamo, who has a Deputy Prime Minister portfolio, is reorganized to be Ministry of Public Service and Human Resource Development.

Apart from the restructuring and reorganization of the existing ministries and agencies, the executive branch also proposed the formation of new institutions which include ministries, agencies/authorities and offices.

Accordingly to the proclamation that is presented to the house, the Office of National Disaster Prevention and Preparedness Agency/Authority, a close kin of a department which was under the Ministry of Agriculture in the past, is one of the institutions to be formed and be directly accountable to the PM’s office.

Similarly, a new office that would be responsible to govern the coffee and tea sectors—Office of Coffee and Tea Development and Trade—is also another institution that will be emerging the near future. And this office is expected to engulf the existing Coffee Quality Research Center.

The Privatization and Public Enterprise Supervision Agency, which was accountable to the Ministry of Industry is now going to be elevated into a ministerial portfolio—Ministry of Public Enterprises—under Demitu Hambissa, formerly Minister of Science and Technology.

Meanwhile, there are also new institutions which are to be established during the current government term such as Urban Plan Institute and Small and Medium Manufacturing Industries Promotion Authority. The two institutions are accountable to Ministry of Urban Development and Housing and Ministry of Industry, respectively.

Similarly, there are still some institutions whose direct accountability and reporting obligation have shifted.

But, there are some key institutions whose mandate and responsibility remain unchanged but they are going to be supervised by the newly endorsed Ministry of Public Enterprise. These institutions are the Metals and Engineering Corporation (MetEC), Ethiopian Airlines, Ethio Telecom, Ethiopian Industrial Parks Development Corporation and Electric Corporation (to be established and will include Ethiopian Electric Power and Ethiopian Electric Service). Government banks and insurance companies will keep their status as being accountable to Government Financial Institutions Supervisory Agency.

According to the proclamation, there are 20 institutions that are accountable to the Prime Minister. Interestingly, MetEC, which was formerly accountable to the Ministry of Defense, is also designated under the supervision of the Prime Minister’s office; but its corporate governance remains open to the Ministry of Public Enterprises for supervision.

The other sensitive sector which has been a couple of times a center of controversy is the Ethiopian News Agency (ENA). The agency was under the supervision of the legislative body before it was amended to be under the regulatory power of the executive. The Reporter