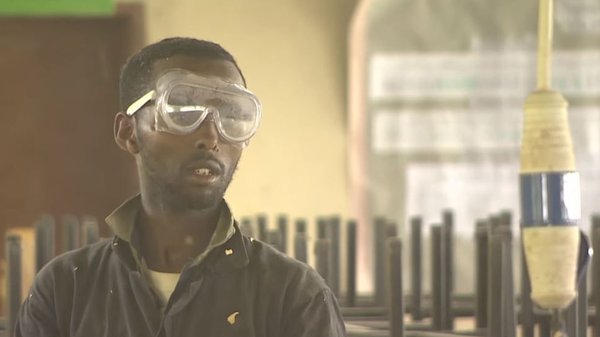 ADDIS ABABA (HAN) May 31.2016. Public Diplomacy & Regional Security News. Charles Stratford. Fighters who surrendered take up classes such as carpentry to start afresh after years of battling the government.

Former rebel fighters with the Ogaden National Liberation Front (ONLF), which has battled for decades against the government for an independent state for ethnic Somalis in Eastern Ethiopia, are learning new skills to make fresh starts.

Gored Osman Ali is one fighter who laid down his arms and surrendered to the Ethiopian military two years ago.

He is learning carpentry in what the Ethiopian government describes as a programme to teach the ex-fighters new skills and integrate them into society.

Ali, who is heavily scarred from sustaining nine wounds during his time with the group, says he joined the ONLF when he was 15.

“I realised there was no way a solution could be found using force and whatever perception I had in the beginning I was wrong,” he told Al Jazeera.

Ogaden is officially known as the Somali region of Ethiopia.

The Ethiopian government has said that hundreds of ONLF fighters have been captured or surrendered in recent years,and insists the conflict is over.

Both the Ethiopian government and the ONLF have accused each other of committing human rights abuse including killing of civilians, torture and rape. There has been no formal political settlement.

WATCH: Abdirahman Mahdi of the ONLF – ‘Ethiopia is boiling’

But Abdirahman Mahdi, a senior ONLF leader, told Al Jazeera in an interview that the armed group was expanding and that it had joined other Ethiopian groups.

Some fighters, such as ex-ONLF commander Mohammed Sharif Abdulhai, disagree.

“Yes I heard the interview and I was very surprised,” the former commander, who surrendered with around 20 other men four months ago, said when interviewed in the presence of government officials.

“Where are the fighters he’s talking about? There’s no one left.”

Many of the former fighters went on to become soldiers within the regional state’s Special Forces, whose role was to battle the ONLF and defend the borders from al-Shabab across the border in neighbouring Somalia.

“[The ONLF is] an organisation whose ideology is based on the strong belief that they can achieve something through brutal force through intimidation of rural communities and killing,” Abdifatah Ahmed, adviser to the president of the Ethiopian Somali Regional State, said.

Watch the second part of Charles Stratford’s report from Ethiopia’s eastern Somali region on Wednesday, which will look at how the government is keen to show that it is investing in infrastructure, health and education.