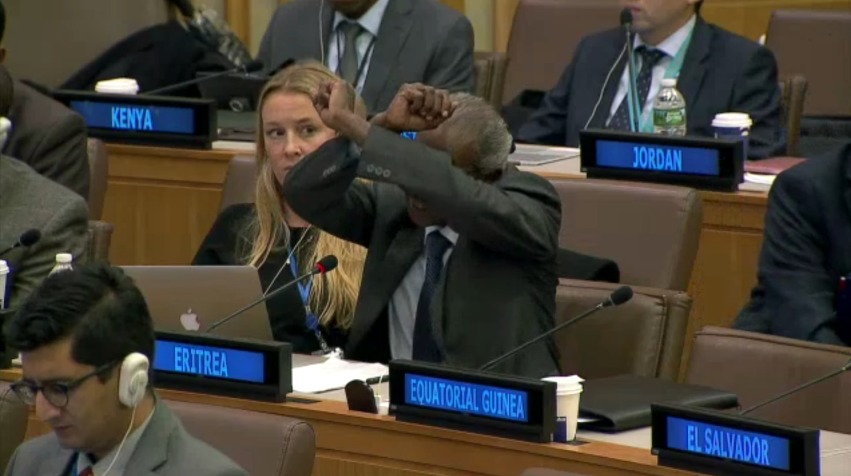 New York (HAN) August 15th, 2017 – Public Diplomacy & Regional Security. According to the opinion by Mulubrhan Dagnew, “US Military Partnership with Eritrea rejected by US law makers.”

We know the Eritrean mafia government’s source of income has been drying faster than we expected. Since the so called “Arab Spring” swept the Middle East and North African countries, deep pocketed friends of the Eritrean regime have been wiped out of existence or hanging to power by a thread and that is bad news to the President-for-life of Eritrea. Isaias Afwerki and his cronies have been milking them for money promising he will destroy Ethiopia. Twenty six years later he delivered next to nothing on his promise, instead Ethiopia is prospering and developing year after year.

For many years now the leaders of the Eritrean regime have been doing everything they can to entice the United States Military to establish military bases in Eritrea, but the lobbying and all other efforts didn’t work to pursued the U.S. government to take the offer from Eritrea. Finally Eritrea leased its southern port of Assab to the Arab countries to earn a little money, however that is about to dry up because of the recent Qatari conflict with its neighbors and Eritrea’s border conflict with Djibouti. Meanwhile giant Ethiopia is rambling about the Arab military in its door steps and it might take some action to protect its national interest.
According to the recent news from the VOA U.S. Rep. Dana Rohrabacher of California submitted an amendment to the National Defense Authorization Act requesting the U.S. secretary of defense to negotiate with his Eritrea, “to cooperate on the war on terror, security in the Red Sea region, confronting Iranian proxies in Yemen and other U.S. security priorities.”

This is Eritrean regime’s way of desperately trying to cling to power because it has been rejected by majority of the Eritrean people (as evidenced by the number of people fleeing the country), the nieghboring countries (war conflict with all of them), and the international community at large (sanctioned by the United Nations for variety of international offences).
A while back some prominent former American politicians (former Assistant Secretary of State for African Affairs Herman Cohen comes to mind.) have lobbied on behalf of the Eritrean government, but there wasn’t any fruitful results. The latest attempt by U.S. Rep. Dana Rohrabacher is another failed endeavor by the Eritrean government to be on the side of big brother U.S.A for all eventualities.

“I think it’s time for us to reach out to Eritrea and take them up on some of their offers, and do things that would be good for us and good for the order of the world in a sense they would be opposing radical Islamic terrorists,” Rohrabacher told VOA in an interview this week.

Another confirmation the Eritrean people have been forgotten by the world. The Eritrean people’s interest, safety, security, well being, and struggle for freedom didn’t mean anything to some politicians as long as their interest is respected.

In the following statement Rep. Dana Rohrabacher tried to take a swipe at Ethiopia. “We should not be just hanging our hats on the side of someone like the Ethiopians and just letting them direct what our policy is,” he said. “Eritrea is in a very strategic location, and it is working with people that I think are very responsible people in terms of the war against terrorists.”

Despite Rep. Dana Rohrabacher’s best intentions toward the one man regime in Eritrea the amendment was rejected and the Eritrea mafia leaders are left to picking Egyptian throwbacks.
Yes, there is more loud voices of opposing the EPRDF government in Ethiopia, but the absolute silence in Eritrea is not an indication of any democracy or public satisfaction. Wait until someone opens the lid of the pressure cooker.