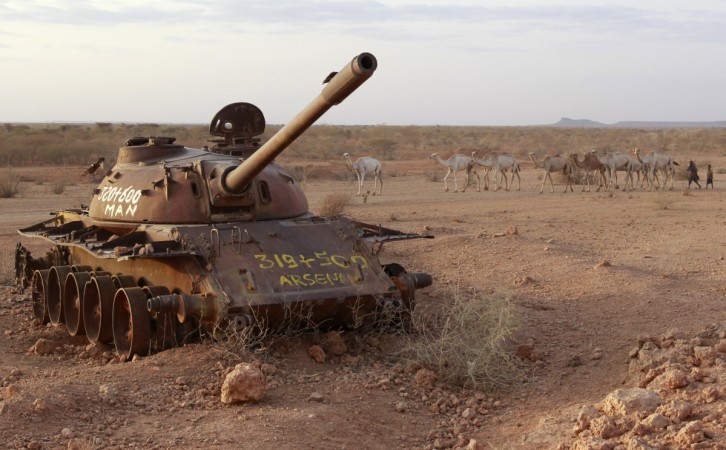 Israel for assistance in its relentless battle with Al-Shabaab from neighboring Somalia.

“Al-Shabaab is a notorious force. Terrorism is really a problem in that part of the continent. Our army in 2006 went to Somalia to fight, as this was for us a serious danger.

They threatened to march into Addis Ababa and pray at the Great Mosque. Eritrea is supporting these elements, trying to wage proxy war with us.”

Helawe said that this fight against terrorism “is one of the issues that is binding the ties with Israel,” though he stressed it was “not the only issue, or the main one.”

Netanyahu is scheduled to travel to Uganda, Kenya, Rwanda and Ethiopia from July 4 to July 8 for the first visit by an Israeli prime Minister to sub-Saharan Africa since Yitzhak Shamir went to the West African countries of Togo, Cameroon, Liberia and the Ivory Coast in 1987.

Netanyahu’s visit will take place on the 40th anniversary of the Entebbe raid in Uganda.

“You are not alone in the world,” said Helawe, sitting in his eighth-floor embassy office in a Tel Aviv high-rise, when asked if Israelis were justified in feeling internationally isolated.

“You are not isolated,” he emphasized. “This is a country that has proven itself in transforming the lives of its citizens,” he said. “These are people that have really risen from the ashes. It is a country that could be a model for others, for people striving to get out of backwardness.”

Helawe said that Israel should be a model to other countries because it turned an arid land into one that not only produces enough food for its own people, but also exports fruit and vegetable; and because of its innovations in science, technology, medicine and agriculture.

“People are interested in this part of your history, and are not only talking about the conflict,” he said. “Why do people want to isolate a country that is significant in contributing to human development?” Having said that, Helawe said this did not mean that there were not things that needed to be corrected in Israel.

“We have to get a solution to this problem,” he said of the Palestinian issue. “It has to be settled through a twostate solution based on negotiations.

“Its progress in science, in agriculture and education are very important for Africa. Its experience in maintaining peace and security. These are also values that Africans need to learn from.”

Helawe said that beyond the symbolism of the prime minister’s trip, a visit whose theme will be that Israel and Africa are returning to each other, the visit will also bring practical benefits. For instance, some 60 Israeli businessmen will be joining Netanyahu, looking for business opportunities on the continent.

Ethiopia, said the ambassador, who has served in Tel Aviv for the last five years, is a country that has enjoyed double-digit economic grow every year for over a decade.

“There is significant infrastructure development,” he said, adding that Addis Ababa “looks like a construction site.”

In 1991, with the overthrow of the government of Mengistu Haile Mariam, there were just two universities in the country, he said.

Today there are 35, with half a million students. What the country needs, he said, is an injection in terms of scientific and technological knowledge, something he believes Israel is uniquely suited to offer.

Mashav, the international aid arm of the Foreign Ministry, currently operates four agricultural projects in the country, and Helawe said Ethiopia would like to see this expanded/ As for what Jerusalem gets from good ties with Ethiopia, Helawe pointed to two main areas: an emerging market for Israeli products, and a country that can provide diplomatic assistance in various international forums.

Regarding economic opportunities, he said Ethiopia is a developing country with a growing middle class.

And as far as diplomatic assistance, he said this can come both through Ethiopia not supporting anti-Israel resolutions in international forums, and lobbying efforts on Israel’s behalf at the African Union, the 54-state organization headquartered in Addis Ababa.

Israel was an observer member of the Organization of African Unity until the OAU was dissolved and replaced by the African Union in 2002. Then, under pressure from Libya’s then-strongman Muammar Gaddafi, Israel lost this status, something it now wants to regain. “Palestine” does enjoy that status.

Israel has diplomatic relations with 41 African countries, and embassies in 11 of them. Jerusalem is urging leaders of friendly African states – including Ethiopia – to push forward a proposal to again extend observer status in the African Union to Israel.

“Ethiopia is one of the founders of the African Union,” Helawe said. “That is good for Israel. There are discussions around this issue.”

One of the African countries that has stood in the way of Israel getting an upgrade at the African Union is South Africa. Helawe said, however, that neither South Africa, nor any of the Arab countries, has pressured Ethiopia to curb its relations with Israel.

“Nobody can pressure Ethiopia. We have our own policies and principles, and we have our own guidelines on how to create relationship with other countries,” he said.

Regarding voting patterns, Helawe said that Israel is interested in securing the votes of African nations in international forums, and “is satisfied” with Ethiopia’s voting record. While Ethiopia might not vote with Israel, “abstaining is better than raising a hand” against it, he said.

Another factor tying Israel and Ethiopia together is the presence in Israel of a 135,000-strong Ethiopian Jewish community.

“They are a serious bridge between Ethiopia and Israel,” he said. “No other community after the Shoah has paid as great a sacrifice to come here. They came on the own volition, with no food, crossing the notorious Sudanese desert. More than 1,500 died.”

While this community is committed to Israel, its members also retain ties to Ethiopia, he noted. “They want Israel and Ethiopia to have a strong relationship, and are committed to it.”

Regarding the issue of African migrants to Israel, an issue that dominated headlines here some two years ago, Helawe said this would not be on the agenda of Netanyahu’s visit to his country. That issue, he said, has “more or less been contained.”