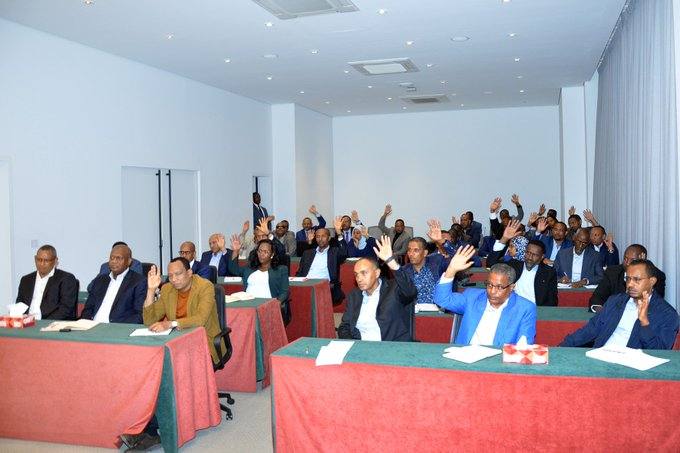 EPRDF Approves Plans to Transform Itself into a United National Party

In its extraordinary meeting on Saturday, November 16, 2019, the committee approved the study with a majority vote and with six members voting against it.

The six members of the executive committee who voted against the proposal are believed to be from Tigrayan People’s Liberation Front (TPLF). The TPLF has been voicing opposition to the plan since the 11th organizational conference of the EPRDF held in Hawassa, the capital of the South Nations and Nationalities People state of Ethiopia, a year ago. Recently, the TPLF released a strongly-worded statement calling the plan ‘illegal.’

Member of the EPRDF executive committee Fikadu Tesema told local media that the committee discussed the document thoroughly with a special emphasis on strengthening the federal system and the right to self administrations of regional states.

Speaking on the issue earlier, Prime Minister Abiy said transforming the EPRDF into a national party will pave the way for any fellow citizen who is capable of serving and leading the country to join the party and serve this great nation in any position, including the Office of the Prime Minister.

The committee members also have stressed the need to nurture diversity in language, nationalities and national identity as the united national party evolves.

The new united national party would be formed wherein all nations and nationalities are fairly represented, Fikadu said

Over the past two decades the nations, nationalities and peoples of Ethiopia have been exercising the right to self-administration, but becoming a single party might undermine this right when the ruling coalition forms unity dismantling its ethnic-based member parties that have been administering various states using the ethnic-based federalism structure.

Nationalities are exercising their right not as a citizen but as a group. For instance, the seat in the House of Federation is assigned based on the population of nationalities. Each member is there representing the number of his/her ethnic group. In this regard, the unity might fail to fill the gap, unless the constitution is amended, according to some political analysts.

According to some experts, the move to promote unity might face notable challenges so long as the laws and the deep-rooted ethnic-based administrative structure are functional. On the other hand, the politicians believe that the formation of unity among the ruling coalition won’t be a challenge for competing parties as the public knows whom to elect.

In addition to embracing affiliated parties, EPRDF has also a plan to open its door to competing political parties that have a keen interest in creating a merger with the incumbent.

The committee will continue its deliberation on the draft programs of the proposed united national party on Sunday, November 17, 2019, Fikadu concluded.