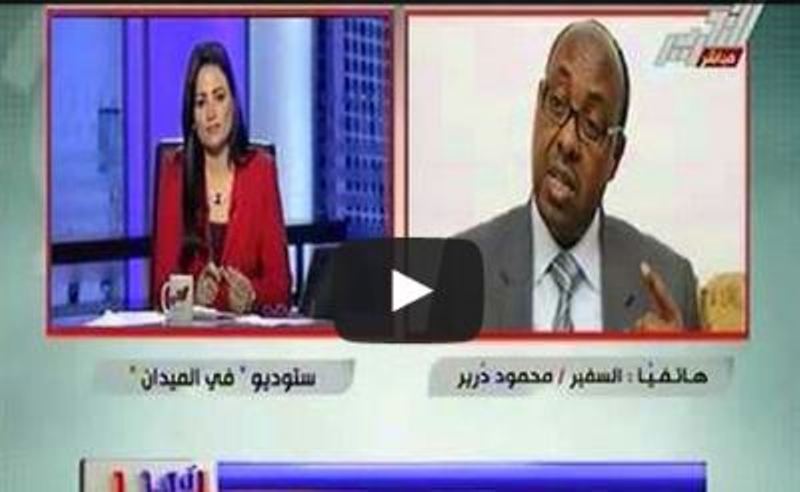 On Wednesday, Rania Badawy, a talk show host on the privately-owned Tahrir satellite channel, got into a heated argument with Ethiopian envoy Mahmoud Dirir Ghedi over the Grand Renaissance Dam, a multi-billion hydroelectric dam that has been a source of contention between the two countries for over a year.

Near the end of the six-minute-long call, Badawy asked the envoy if Addis Ababa insisted on pressing forward with the dam’s construction in its current form and capacity, which Egypt fears will harm its share of the Nile’s water.

The ambassador replied: “You do not understand about dams and are talking in a bumptious tone.”

Badawy then angrily told the ambassador he had “crossed his limits” and that he should not “characterize her  talk or speak to her about arrogance”. She then thanked him and abruptly ended the call, as his voice trailed off in an attempt to reply.

The head of the TV station, Mohamed Khedr, told Al-Ahram’s Arabic news website on Sunday that the move to suspend Badawy came amid his channel’s “sense of responsibility,” adding that the management was revamping the programme map ahead of the Islamic holy month of Ramadan – which should fall on 29 June.

In comments carried by state news agency MENA earlier in June, Ethiopia’s Foreign Minister Tedros Adhanom – on a visit to Cairo at the time – criticised local media for sending “very negative messages, sometimes systematically, that create a feeling of rejection” between the people of both nations. The senior diplomat, however, said that Addis Ababa and Cairo were looking forward to a “new era” of mutual ties.

Almost 10 days ago, the same station suspended another female broadcaster who made light of mob sexual assaults against women in Cairo’s Tahrir Square during celebrations for President Abdel-Fattah El-Sisi’s inauguration earlier this month.

Khedr said Sunday that the suspended anchorwoman, Maha Bahnasy, would return to the airwaves after Ramadan.